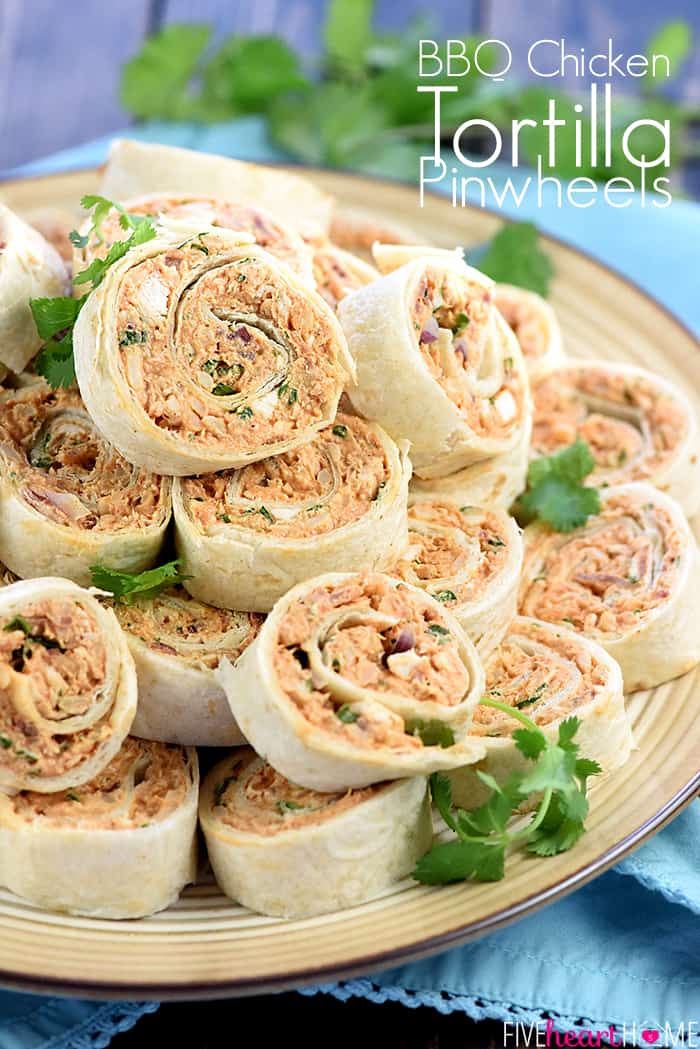 Okay, friends...I've got one last Super Bowl recipe for y'all before the big game! Of course, these BBQ Chicken Tortilla Pinwheels are perfect for more than just game day. They make a simple, delicious appetizer for any party or get-together...potlucks, barbecues, showers, picnics, you name it! 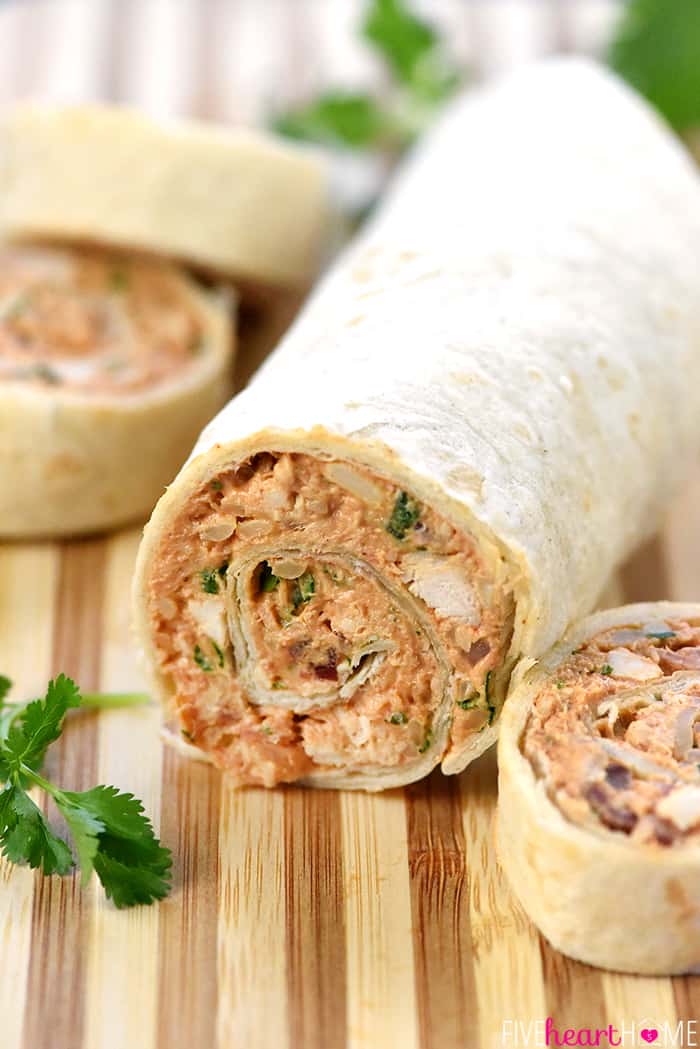 You've probably had a variation of tortilla pinwheels before.

They basically involve spreading some sort of cream cheese mixture -- flecked with all kinds of goodies -- onto a large flour tortilla that's then tightly rolled, chilled, and sliced.

The traditional version typically includes diced olives, green onions, and (if you're feeling all wild and crazy) perhaps some green chiles or diced ham. 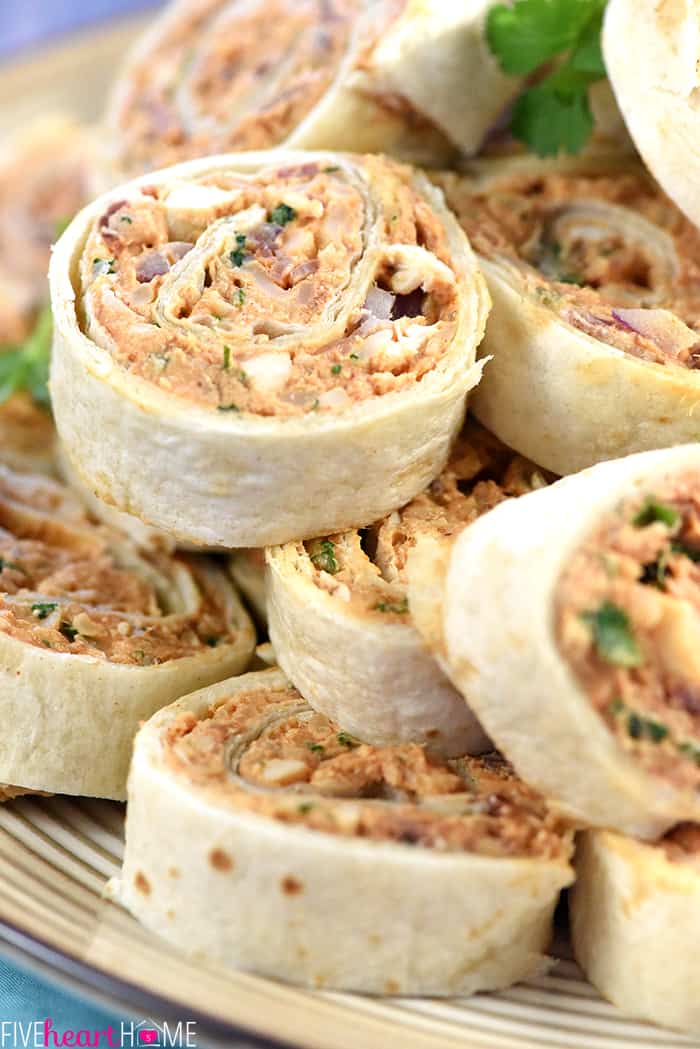 I can vividly remember the first time I had (and made) tortilla pinwheels. Back when I was a kid, my dad was elected president of a fraternal organization that he belonged to, and my mom was tasked with preparing the food for the reception after his induction ceremony. I remember her planning the large menu of various appetizers, dips, and desserts, poring over old church cookbooks and ripping recipes out of magazines. And I remember that tortilla pinwheels were one of the new-fangled finger foods that she came across and wanted to try.

So I helped her assemble them...and slice them...and it turned out they were one of the hits of the reception buffet on that mid-80s, small town afternoon. I've had an affinity for them ever since. And I decided that before football season was over, it was high time that this blog housed a new tortilla pinwheel variation! Are y'all as excited as I am that the day is finally here? 😉 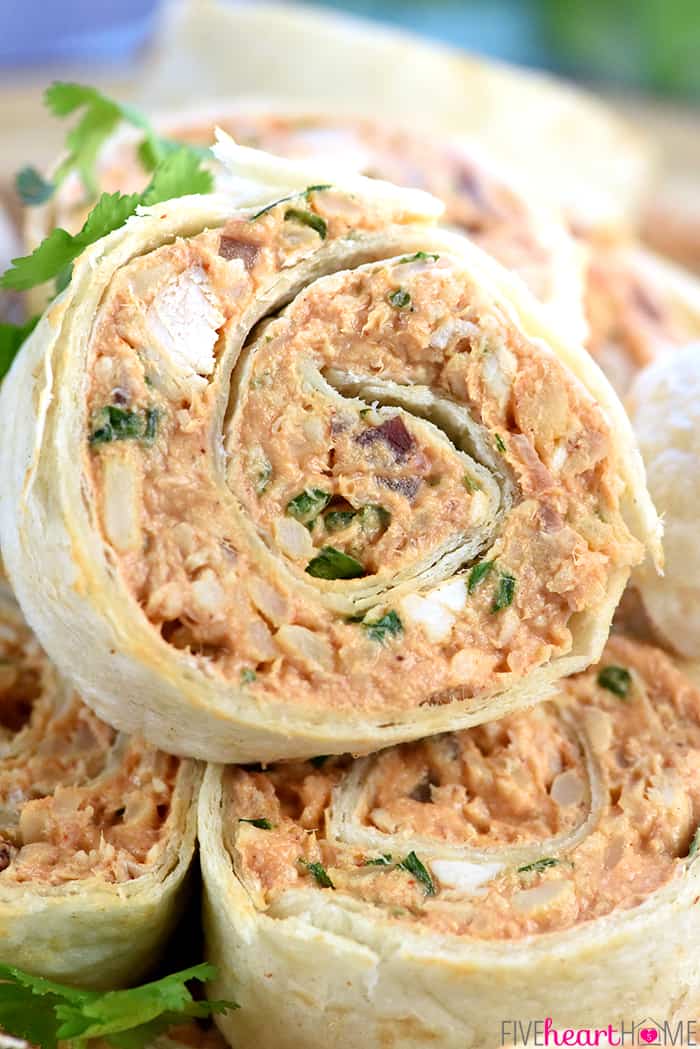 I decided to go for loads of flavor via BBQ Chicken Tortilla Pinwheels, which actually draw inspiration from a BBQ Chicken Pizza -- think California Pizza Kitchen.

Cream cheese is at the base, then I carried forth the pizza theme with shredded mozzarella. Next, of course, there had to be barbecue sauce and chicken. Then I decided to go slightly rogue and add crispy, salty diced bacon because...why not? And finally, for one last boost of flavor, I stirred in chopped fresh cilantro and diced red onion. 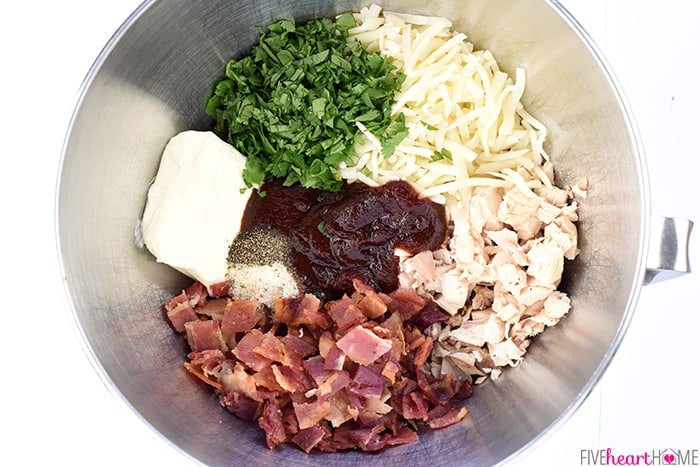 How to Make the Onions Optional

Before we get too much further, however, let's back on up to that onion. You seasoned readers of Five Heart Home already know that I hate 'em. 😉 So if, like myself, onions aren't your favorite, you certainly have my permission to leave them out.

But if you want to add onions to some pinwheels (for your onion-loving family -- blech) while leaving other pinwheels onion-free (YES, PLEASE), you may whip up the cream cheese mixture sans onions. Then, onto a few cream cheese-slathered tortillas, sprinkle diced onions (which will make things easier to roll up than the onion slices pictured below -- oops. But while we're picking apart this photo, go ahead and spread the cream cheese mixture all the way to the edges of your tortillas. You're welcome.) 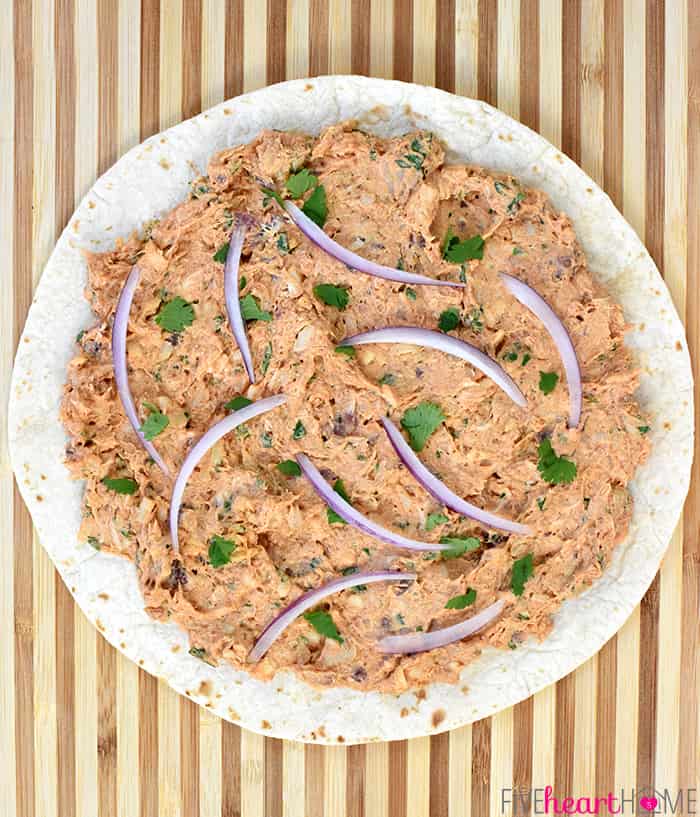 Simply leave the onions off the other tortillas. Just be sure to store the two varieties in two separate containers so that the vile onion fumes don't taint the blessedly onion-free pinwheels. 😉 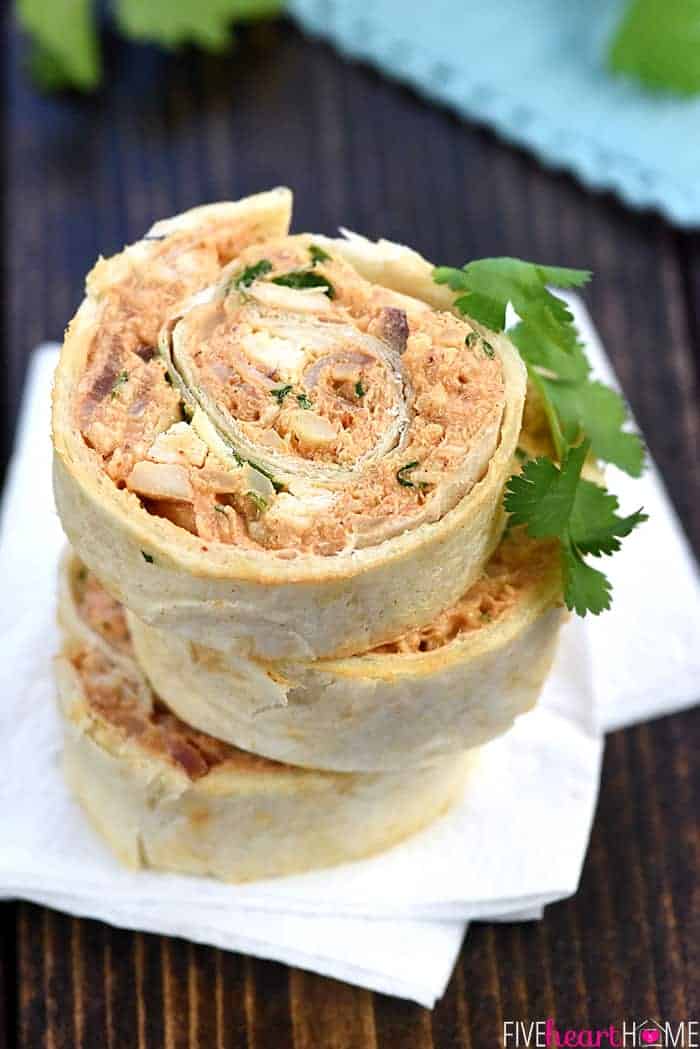 Before I get to the recipe, I'll leave you with one final thought: a comment from my husband after trying his first BBQ Chicken Tortilla Pinwheel.

"You know, I don't usually care for those tortilla cream cheese things. But these are actually really good!"

And then he proceeded to eat seven more.

Just kidding...I didn't actually count. But he most certainly did like them! 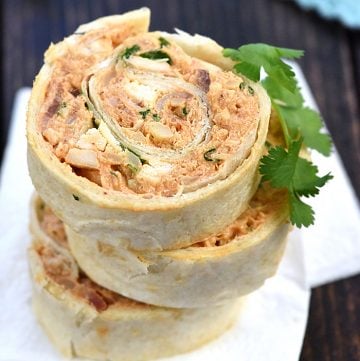