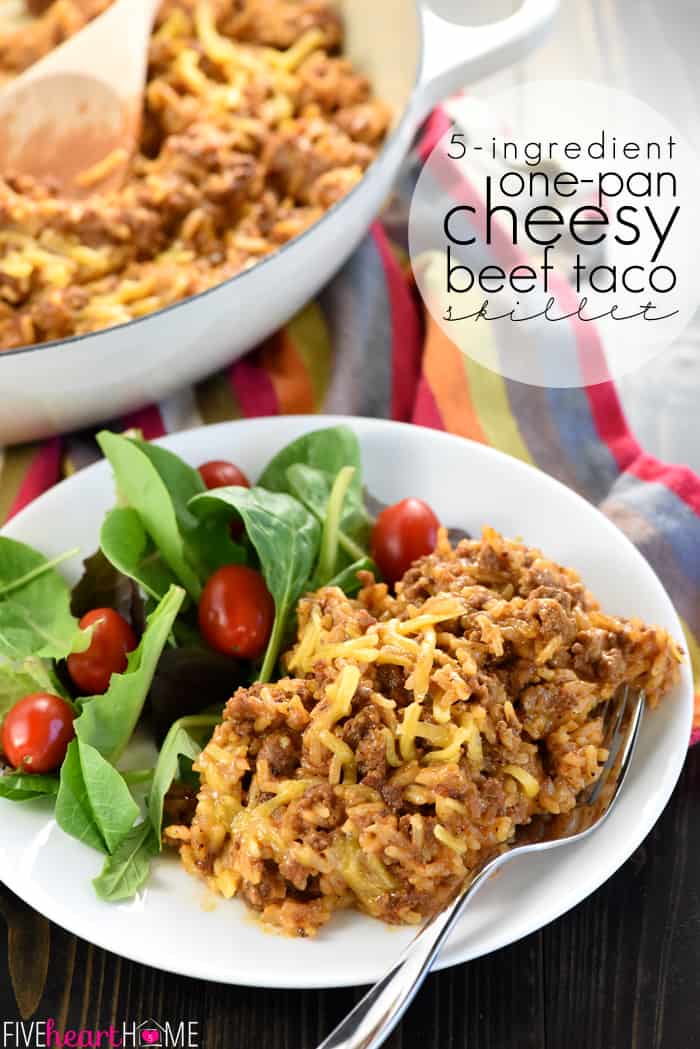 In case y'all hadn't noticed, I've been on somewhat of a one-pot/one-pan/one-skillet recipe kick lately. And why not? Who doesn't love a complete dinner that's made in about 30 minutes while dirtying only one large cooking receptacle?

So a few weeks ago, I'd been running around all day and hadn't had any time to think about dinner until, ohhh, about 5 o'clock. And so I did what one does when one is short on time and overdue for a trip to the grocery store....I reached into the freezer for a pizza to pop in the oven. Alas, the freezer revealed that frozen pizzas needed to be added to my grocery list as well, so I quickly had to come up with a plan B. I realized that I had a lone pound of ground beef in fridge, so what could I make with that in a matter of minutes? Sloppy Joes? No buns. Tacos? No tortillas. But the taco theme stuck for some reason, so I quickly secured a handful of ingredients that would turn ordinary taco meat into a from-scratch copycat of good ol' Taco Hamburger Helper. 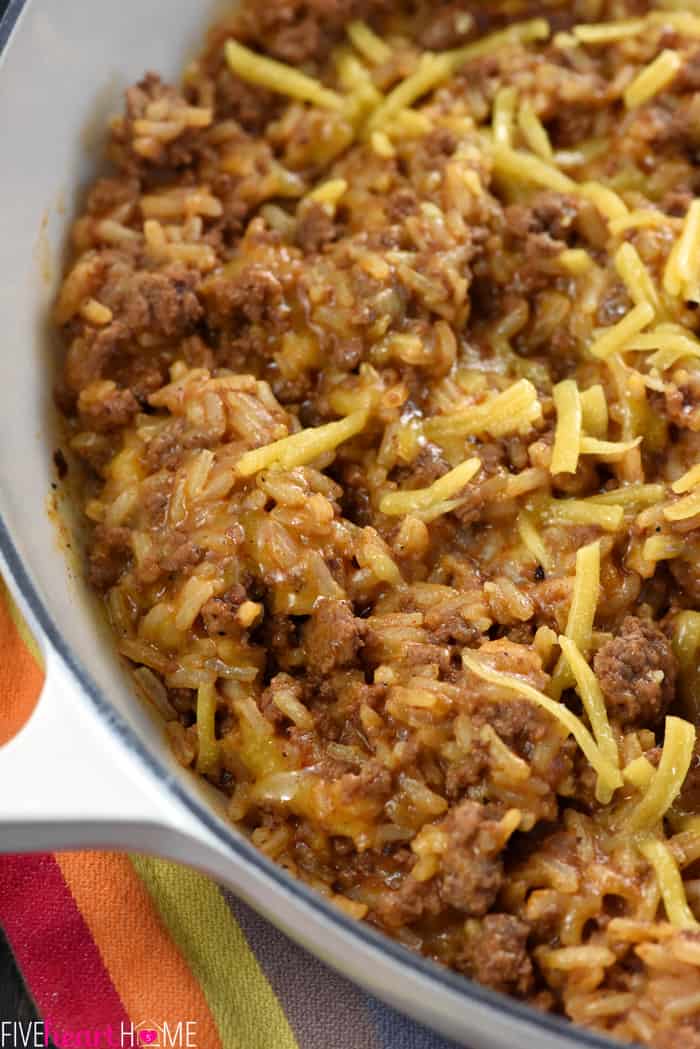 How to Make It

This recipe is ridiculously easy to make, friends.

The inspiration for this recipe admittedly originated from the childhood-affinity-for-Hamburger-Helper recesses of my brain. In fact, the minute I took my first bite, I instantly had the conviction that my meal should be accompanied by a tall tupperware cup of Kool-Aid and a Jello Pudding Pop for dessert.

Do y'all remember the Beef Taco Hamburger Helper from the 80s, made with rice instead of pasta? Welp, this recipe is a homemade version of that. I just now Googled it to see if it still exists, and apparently there's a "crunchy" version these days that's got the fancy-pants addition of tortilla chips on top. But the one I remember loving as a kid was simply ground beef, rice...and whatever icky seasoning packet and powdered cheese came in the ubiquitous red and white box. 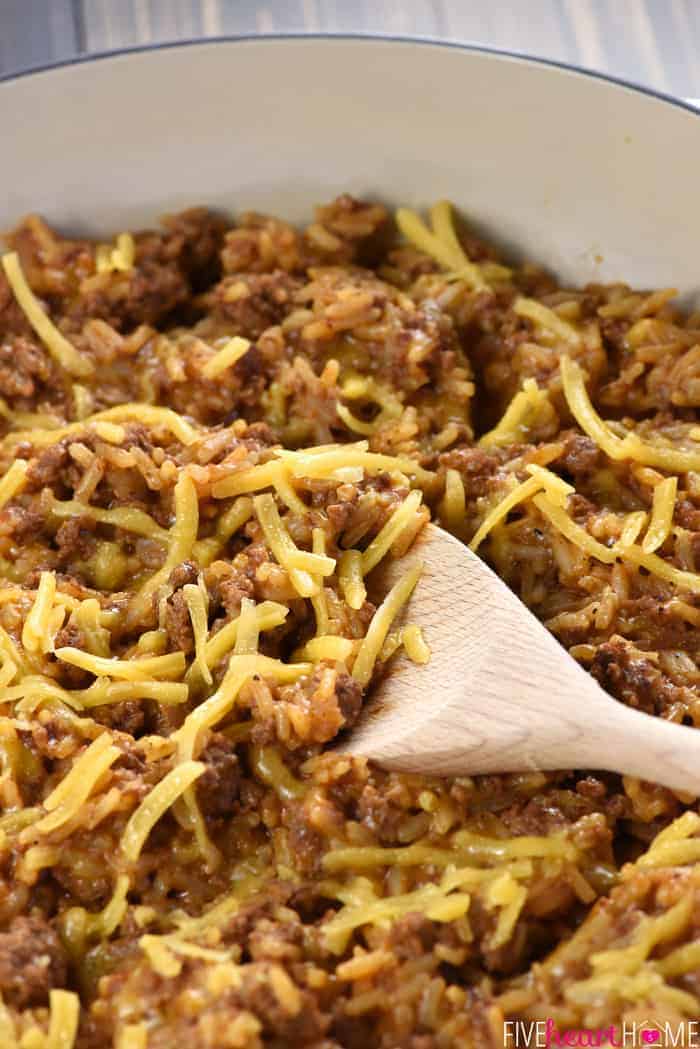 But it's much healthier and tastes wayyyy better, since it swaps out all of those processed ingredients for real, all-natural ingredients. And just five of them, at that!

Now, if your pantry is stocked and you want to jazz up this meal with some additional ingredients, feel free!

Get wild and crazy with your dinner-making self! 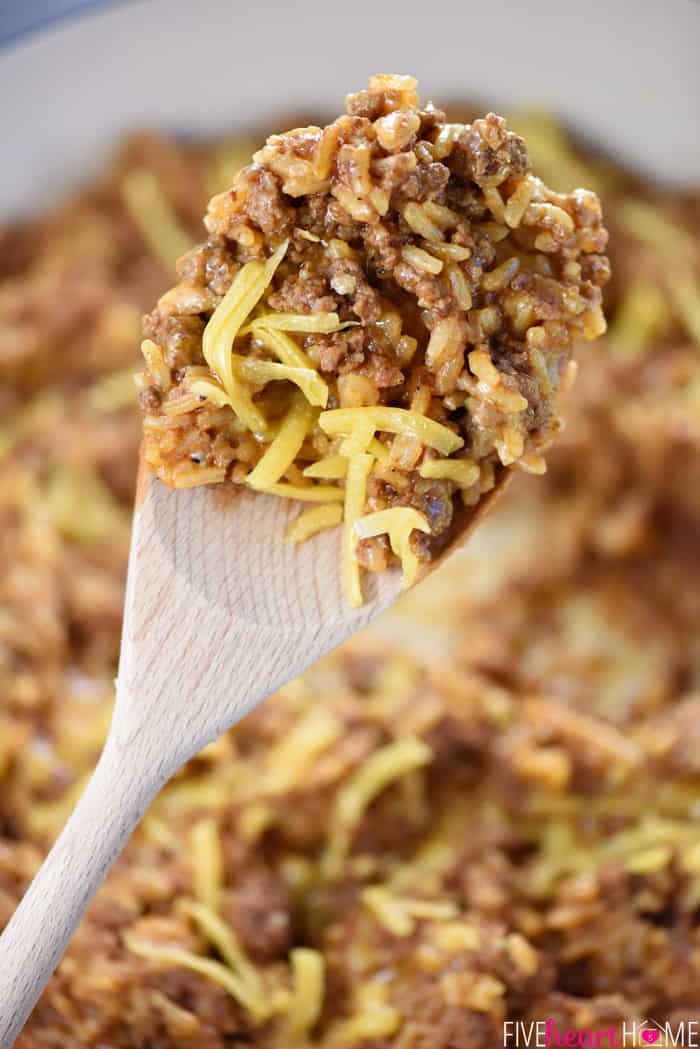 As far as the rice, I chose white rice for this recipe because of its quick cooking time.

I love wholesome brown rice and use it most of the time, but since it takes twice as long to cook (and would require more liquid), I thought that white rice would just work better for this 30-minute, one-pan meal.

You'll have to experiment with the liquid ratio if you decide to make this recipe with brown rice.

Also, this recipe should work in just about any large skillet, pan, or pot. You see it pictured here in a wide, deep braiser, but I'm just as likely to make this type of recipe in a large Dutch oven, which is better at containing grease splatters when I brown the meat. 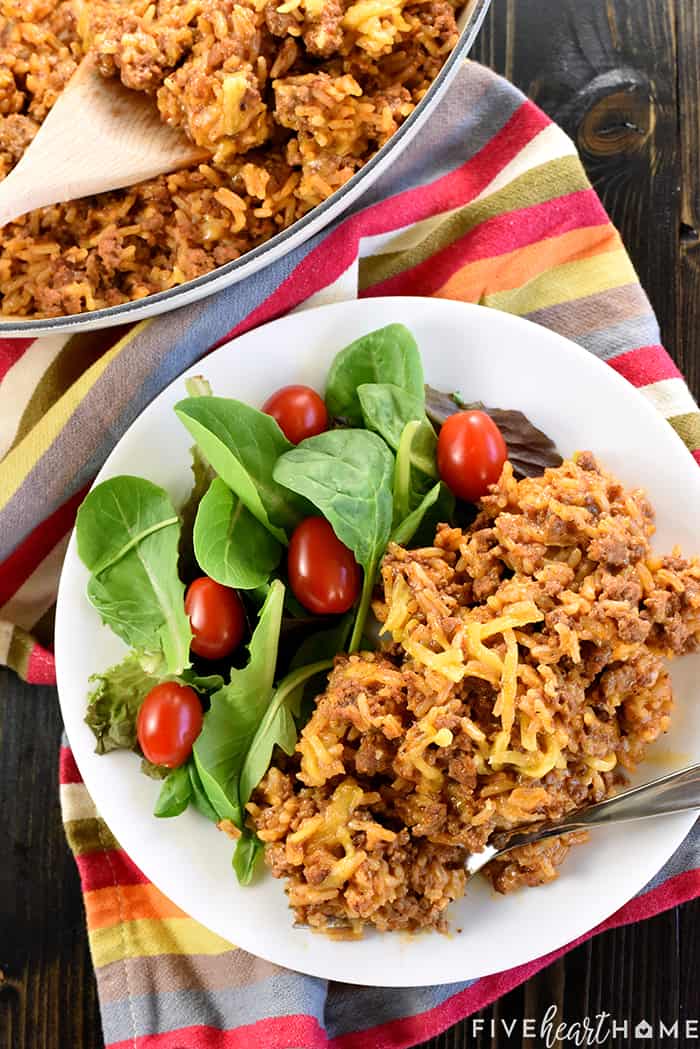 So who's ready for a quick and easy, one-pan supper that will tickle your tastebuds, fill your belly, and simultaneously transport you back to 1983? Whip up a pitcher of Kool-Aid and join me for some Taco Hamburger Helper, won't you? 😉 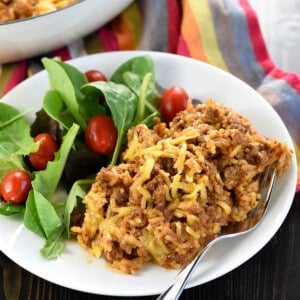