Well, friends...it appears we have a Super Bowl LI match-up! And while I may be a bit rusty on my Roman Numerals, I can tell you one thing for sure...regardless of whether or not I have a dog in the fight (and this year, I don't), I'm always excited for any TV sporting event that revolves around fun and food. That means, in a few short weeks, we'll be adding this crockpot corn chowder to our football-friendly menu!

Slow Cooker Mexican Street Corn Chowder is as good as it sounds, y'all.

One of my most popular recipes from last year's Super Bowl was a decadent, delicious Ultimate Mexican Street Corn Dip. So this year, I was inspired to turn that dip into a soup...because as far as I'm concerned, one can never have too many excuses to eat corn + avocado + bacon + cheese. 😉

Better yet, why not make said soup in the crockpot? That way it can do its thing effortlessly unattended, only to welcome a plethora of mouthwatering toppings just before serving.

So as a starting point for this crockpot corn chowder, I actually turned to a tasty Tex-Mex Corn Chowder from my cookbook. And while I tweaked a few things on the front end of the recipe, the real difference came at the end once the soup was done.

Traditional Mexican Street Corn is sprinkled with crumbled cotija cheese and cilantro, so those were obvious toppings.

But thanks to last year's dip recipe, I learned that the sweet corn, spicy chipotle, tangy cotija, and bright cilantro are beautifully complemented a couple of other addictive ingredients...crispy, salty bacon and smooth, creamy avocado, to be exact.

The end result? One amazing soup!

Serve it alongside some Jalapeño Cheddar Cornbread and I'd say you have one perfect dinner. 🙂

It's super quick and easy to get this soup going in the crockpot!

So crank up the crockpot, set out the toppings, and watch your Super Bowl guests go crazy for this savory, scrumptious Slow Cooker Mexican Street Corn Chowder!

But even if you're not a football fan, it's certainly not required that you only enjoy this recipe during the big game. It would be equally enjoyable as a weeknight dinner or for a soup potluck or at just about any gathering.

Just promise me you'll find a reason to make it...and make it soon! Because a soup this unique and tasty only comes around, ohhhh, every LI years or so... 😉 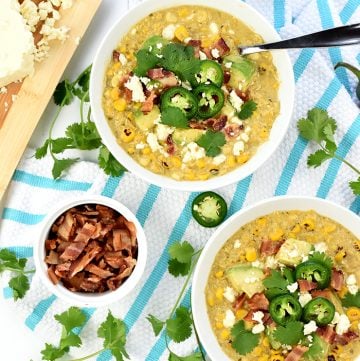