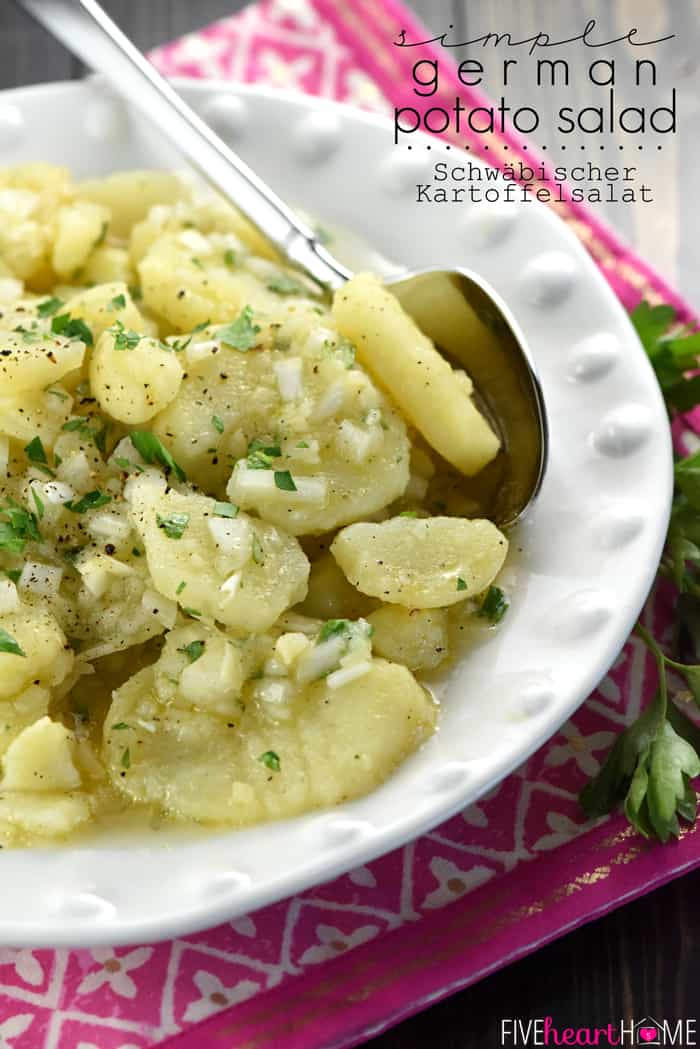 It's potato salad season, friends! And seeing as how I've shared recipes for Classic Potato Salad and Herb + Greek Yogurt Potato Salad and German Potato Salad (the hot bacon/vinegar kind) in summers past, it's high time I share the traditional type of potato salad found in the region of Germany where my mom grew up and where my relatives still live today: Schwäbischer Kartoffelsalat!

(Aren't German words fun? So many letters, so little time...)

Swabia is a region in southern Germany (think Stuttgart) where my mom's side of the family originates and still lives today. Every few years we go back to visit, and this is the type of potato salad we frequently enjoy on each trip, whether made by my grandmother, aunt, cousins, or served in a biergarten or restaurant. Ironically, it's not the kind of potato salad that my mom always made when I was growing up...she (*gasp*) Americanized her potato salad recipe by adding some mayonnaise. Additionally, this Schwäbischer Kartoffelsalat is different than the bacon-vinegar potato salad sometimes associated with the Bavarian region of Germany (hello, Oktoberfest!). 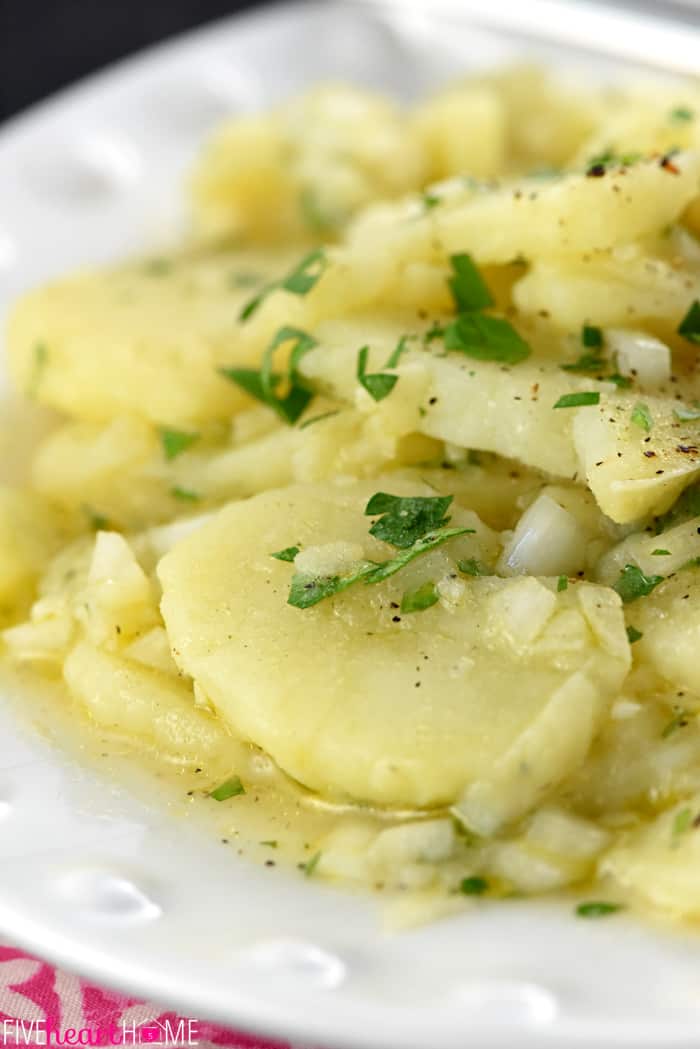 How to Make Swabian Kartoffelsalat

The bottom line is that this Swabian Kartoffelsalat is absolutely delicious in its simplicity and versatility. The potatoes available in Germany are different than those found here in the good ol' U S of A, so I recommend Yukon golds (or, at the very least, yellow potatoes) as the variety that most closely replicates German potatoes.

German potato salad always starts with potatoes that are boiled whole in their skins and then peeled while still hot. As a child, it always amazed me how my mom could hold and peel a steaming potato straight out of the pot, but for us mere mortals, it's highly advisable to allow the potatoes to slightly cool and then hold each one upright with a fork while peeling with a small paring knife. The skin slips right off so it doesn't take very long. Next, thinly slice the potatoes and douse with well-seasoned beef broth (or chicken broth may be used instead). 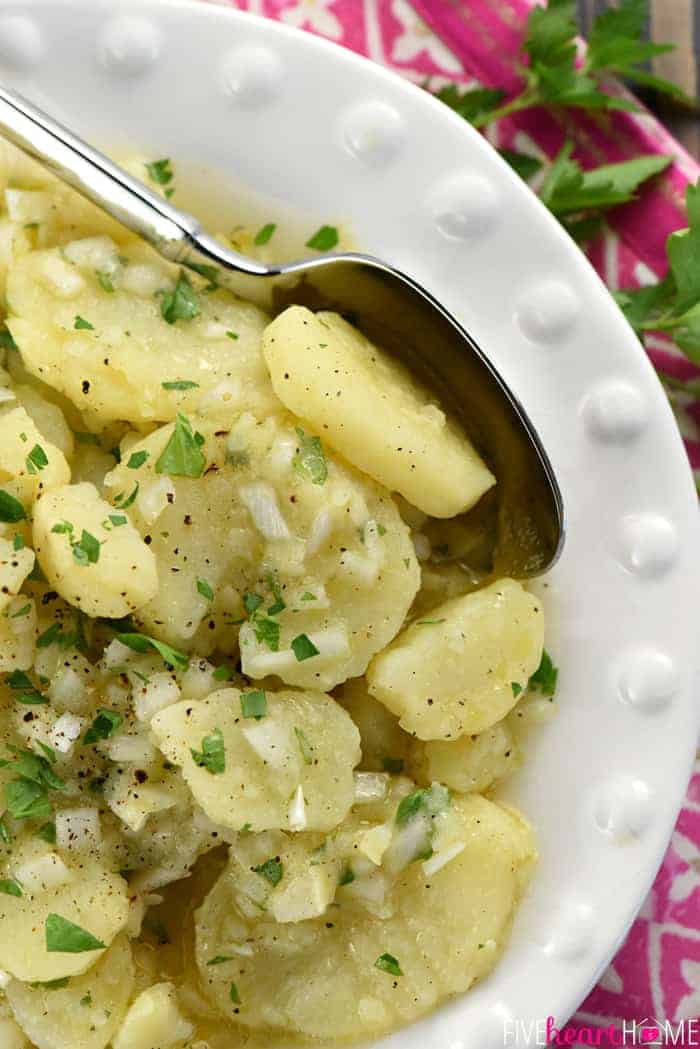 A quick word on this broth-dousing step...the more flavor the better, since the potatoes are going to soak up all of that broth. For me, this either means using some of my treasured homemade stock from the freezer, or splurging just a bit on a better brand of broth at the grocery store. For my every day recipes -- soups and stews and such -- I usually just buy whatever grocery store brand organic broth that I can find. But when I make a recipe that's dependent on broth for flavor (like this one), I spend a little more and buy a box of high-quality broth, which tends to be darker and more concentrated (I like the Pacific brand).

The potatoes are left to marinate in the broth along with white wine vinegar, minced onion, salt, and pepper. Then, after the potato slices have absorbed all of that delicious flavor, a bit of vegetable oil is stirred in to add richness, the seasonings are adjusted, and the whole shebang is finished off with a shower of chopped fresh parsley. And that's it! German Potato Salad -- er, Kartoffelsalat -- perfection. 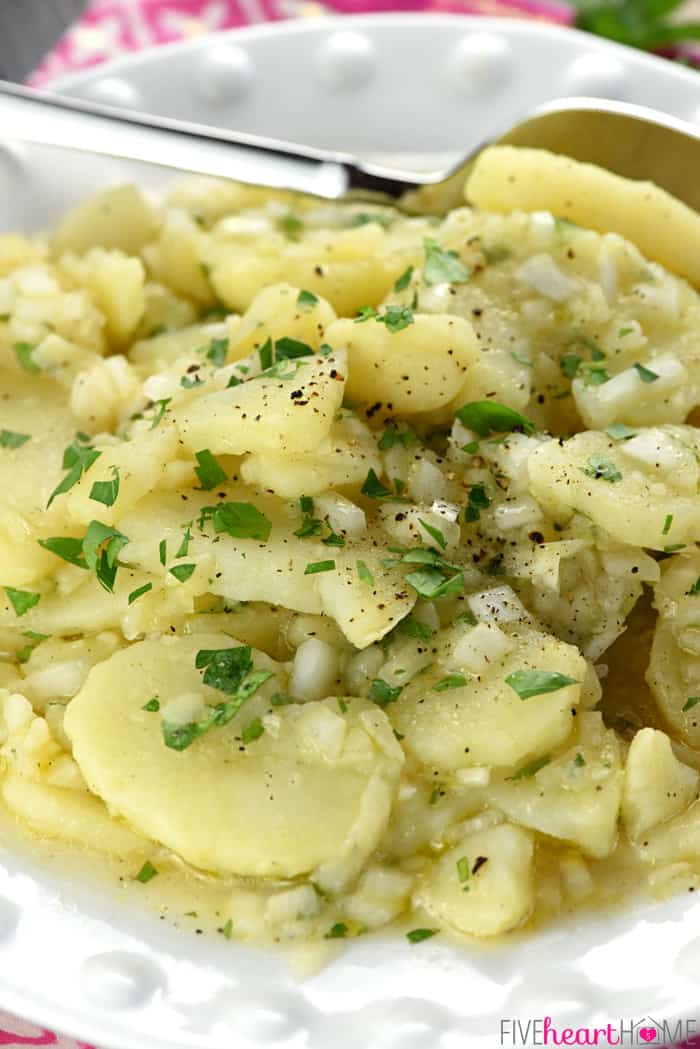 A Note About the Onions

Now, those of you who know me -- whether in real life or as long-time followers of this blog -- know that I loathe onions. Yet here you see them, plain as day, on Five Heart Home! Allow me to explain two good reasons for this anomaly: 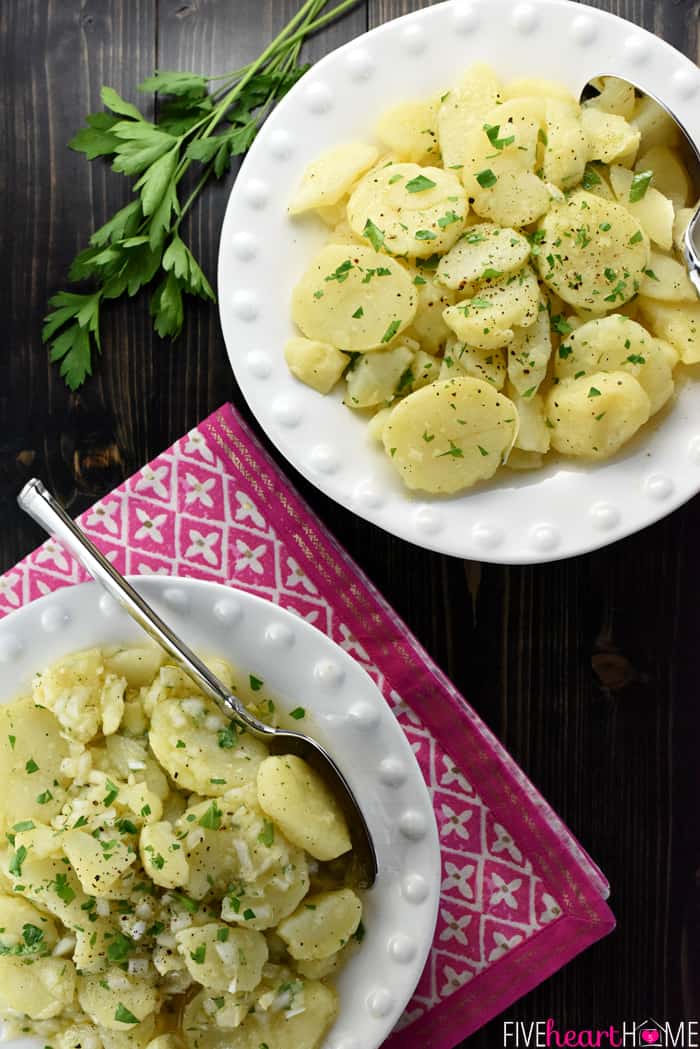 So whether you're looking for a summer side dish to complement your burgers, barbecue, and picnic fixins' -- or a year-round accompaniment to a big plate of wurst and kraut -- Swabian Potato Salad is sure to become a new family favorite!

And if you've ever traveled to Germany and occasionally find yourself craving that simple, scrumptious kartoffelsalat that you enjoyed with just about every meal, well, this recipe is here to save the day.