An AFL WAG has revealed her daily struggles with her obsessive compulsive disorder as her footballer husband remains locked down in the COVID-19 hub.

Monique Fontana has battled the illness since she was a teenager, but sought psychiatric care for two weeks this month when she recognised her habits were intensifying.

Her partner and Carlton co-captain Patrick Cripps, is confined to a Queensland COVID hub designed to get the game up and running again during the pandemic.

Ms Fontana, 25, had the opportunity to join him when he first left, but opted against leaving the couple’s Richmond home and her routine out of fear her condition could deteriorate in isolation.

As part of her condition, Ms Fontana’s rituals included repeating the phrases ‘malignant cancer free’ and ‘plane crash free’ hundreds of times a day to ‘protect’ herself and her family from danger. 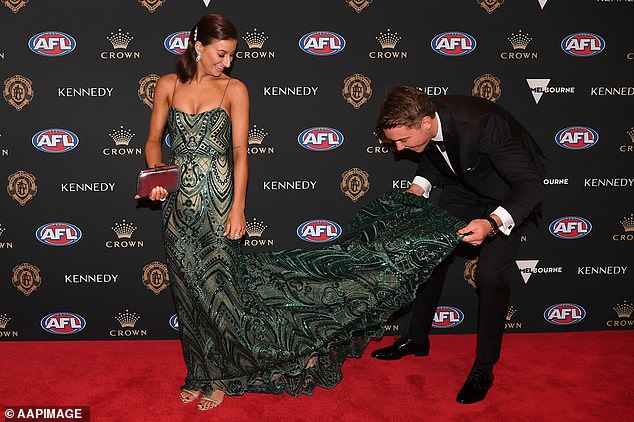 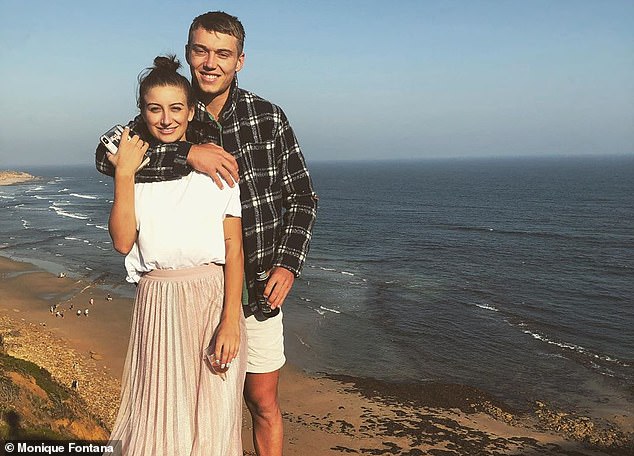 She told Herald Sun the concern about cancer stemmed from her sister requiring cancer treatment as a teenager, while her fear of planes began when she was 18 after suffering a severe panic attack while flying.

‘I have to repeat that in my head multiple times. It’s reassuring, if I don’t do it I fear something bad’s going to happen to someone,’ she explained.

Another of her habits has been to repeat sentences again and again in her head until they reached a certain length.

She would envision four dots in her mind and the sentence had to span the entire width of the dots, meaning she would sometimes repeat the words countless times until she felt they had ended on the ‘last dot’.

During lockdown, Ms Fontana has developed another sinister impulse.

The 25-year-old feels she must vomit at least one of her meals up each day. 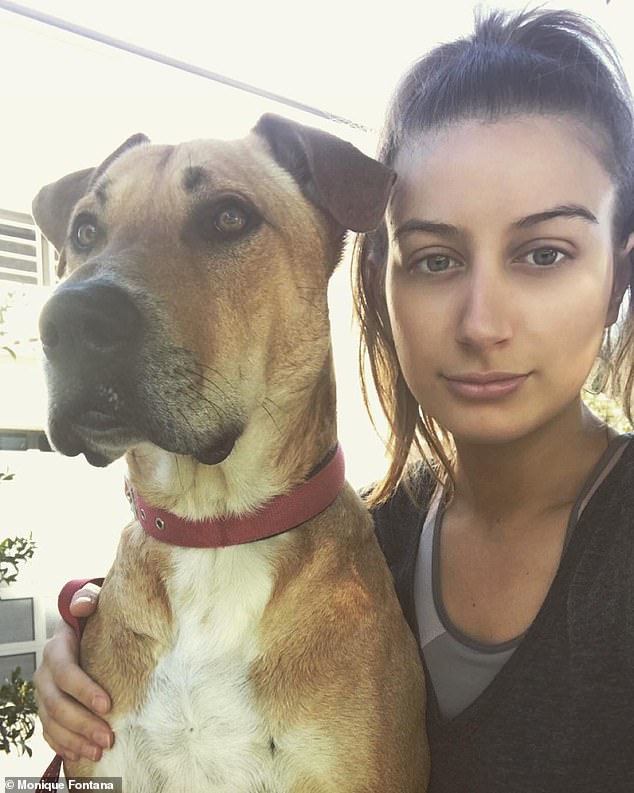 During lockdown, Ms Fontana (pictured with her dog) has developed another sinister impulse. The 25-year-old feels she must vomit at least one of her meals up each day 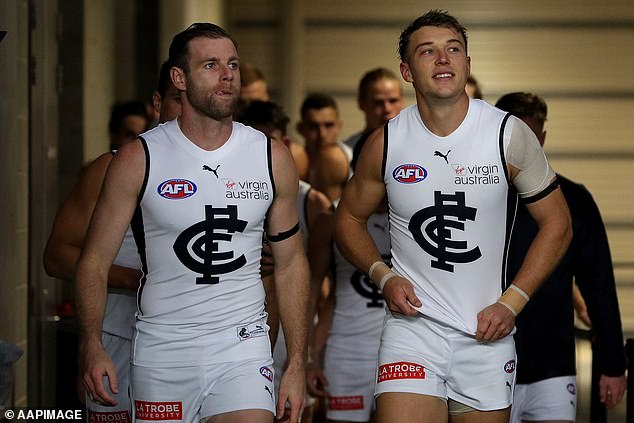 ‘I think they manifest as well, with the vomiting, that was a completely new one to me that had never happened until recently. I’ve never worried about my weight or anything. And then with my OCD, my head told me I had to vomit that one meal a day.

When she recognised the severity of her condition and its progression throughout lockdown, Ms Fontana voluntarily took herself to hospital.

‘I spent time in hospital to learn techniques and skills to manage my OCD,’ she said on Instagram on Wednesday.

‘I learnt so much about myself, my condition and how for me it will not go but I will be able to manage it to live a fulfilled life.’ 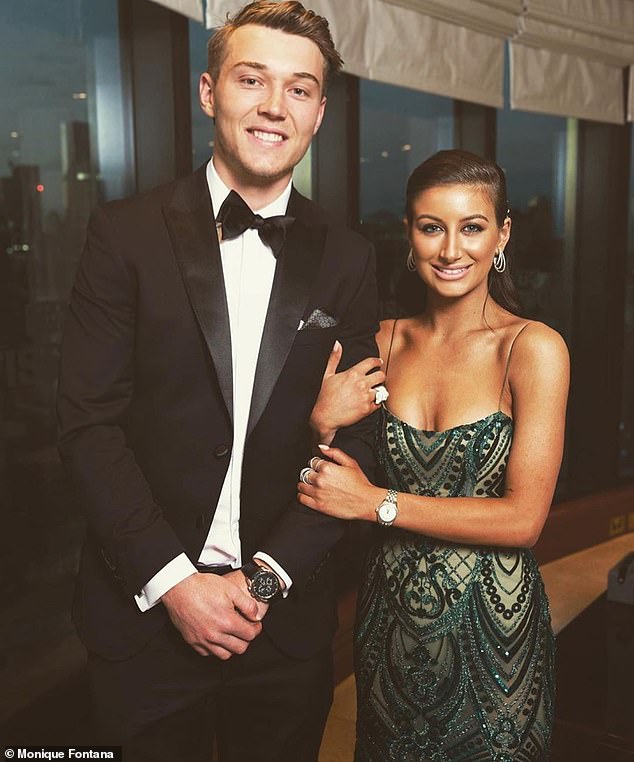 Obsessive Compulsive Disorder is an anxiety disorder which generally troubles sufferers with thoughts or impulses they don’t necessarily want.

Sufferers usually have repetitive rituals even though they may be aware that their actions are irrational or excessive.

The compulsion to undertake certain tasks is often impossible to resist.

Treatment helps to manage and reduce symptoms and impulses.

Ms Fontana said she hoped that by speaking out about her condition, she could help spread awareness and encourage people to talk about mental health issues.

‘There are times where we do need extra help, and that can change your life,’ she said.

She offered to be a pillar of support to other people in her situation, asking them to reach out so she could share funny stories and encourage them to seek support.

Ms Fontana said her partner has been incredibly supportive of her condition, even studying it in his spare time to better understand how to help her.

Cripps is now considering undertaking a post grad in psychology and has involved his club every step of the way to ensure they get the best support possible.

‘When I’ve called him crying, he has been there for me, and he has just sat there and just listened to what I have to say. He’s taught me how to breathe properly. He sent me a little teddy bear when I was in hospital and I had to call him Moose and he said to hug Moose when I got sad,’ Ms Fontana said.

The couple often meditate together and do a lot of mindfullness work, which has been restricted since he entered the AFL hub.

Ms Fontana said its been ‘very, very difficult’ not having him at home with her, citing concerns that he might too be struggling.

‘He puts on such a brave face … he’s so strong, but I worry about him a lot. I think he feels the need to hold everyone together, he feels a lot of responsibility to make sure everyone’s happy. It’s a really beautiful quality of him but sometimes I worry that can wear him out a little bit,’ she explained. 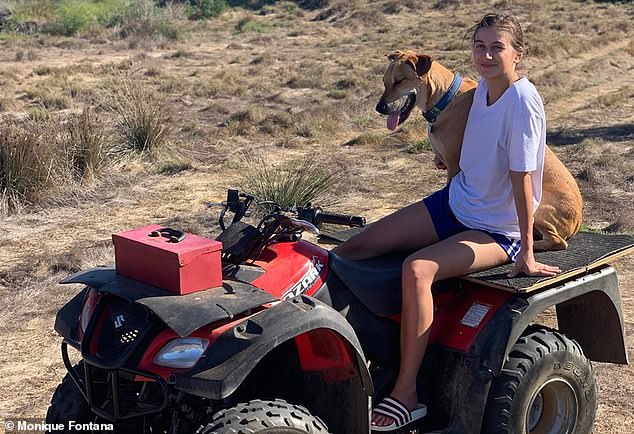 Ms Fontana said she hoped that by speaking out about her condition, she could help spread awareness and encourage people to talk about mental health issues 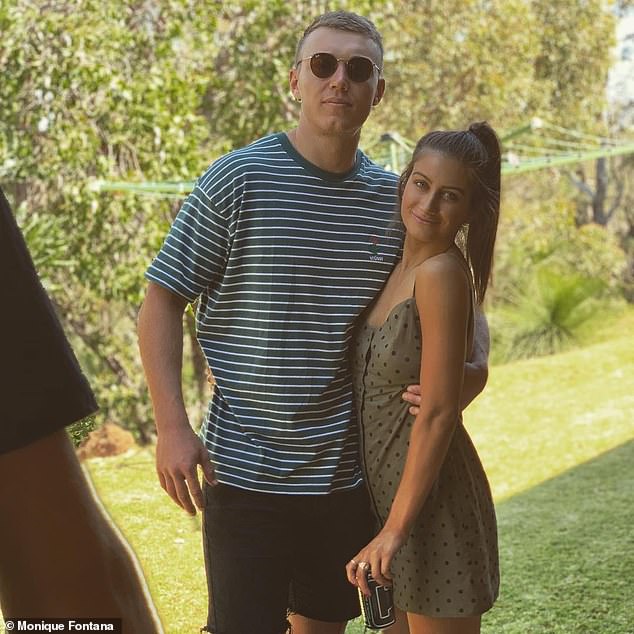 Ms Fontana said its been ‘very, very difficult’ not having him at home with her, citing concerns that he might too be struggling