The BBC has accused Emily Maitlis of ‘overstepping the mark’ with her monologue about Dominic Cummings and the ‘blind loyalty’ of his boss Boris Johnson sparking a war with her Newsnight colleagues, it was revealed today.

The corporation has been ‘flooded’ with more than 20,000 complaints about the show’s host – but this includes thousands of emails from her supporters who feel she has been thrown under the bus.

Despite censuring the broardcaster, 49, the BBC has insisted the case is now closed and Ms Maitlis will face no formal investigation – but Ofcom is being urged to probe the incident after receiving hundreds of complaints.

Tory MP Philip Davies told MailOnline: ‘It seems that the BBC, Channel 4 and Sky News long ago ended any pretence of impartial reporting and now believe their role is to indoctrinate everyone with their left-wing London centric metropolitan views. Emily Maitlis on Newsnight was a prime example of that. Ofcom seem to be asleep at the wheel and if they are not going to take action to ensure the impartiality of broadcasters then they should either make way for people who will or scrap the rules around impartiality so that there is no longer any pretence.’

Tory MP Michael Fabricant also told MailOnline: ‘The BBC fought long and hard to stop Ofcom having an overview of the BBC. Now it is time for Ofcom to prove their worth. There needs to be a full inquiry into whether the BBC is reporting the news or whether it is dictating the news agenda and editorialising too presenting personal views.’

Last night the BBC issued a second longer statement about Ms Maitlis’ speech on Tuesday night, where she claimed the public had been made to ‘feel like fools’ in the row over No 10 aide Mr Cummings’ lockdown trip to Durham with his family.

Her Newsnight colleagues are said to be in uproar but one senior BBC broadcaster said ‘a bunch of BBC managers were very offended’ by her words and last night released a new explanation, said to be signed off by the director of news Fran Unsworth and involved head of current affairs Joanna Carr.

It said: ‘Our editorial guidelines allow us to make professional judgments, but not to express opinion. The dividing line can be fine, but we aim to say so if we think we have overstepped the mark.’ 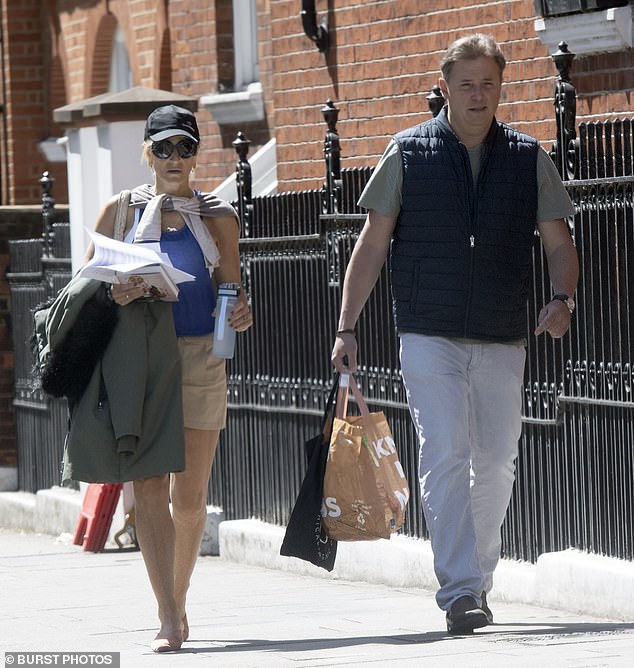 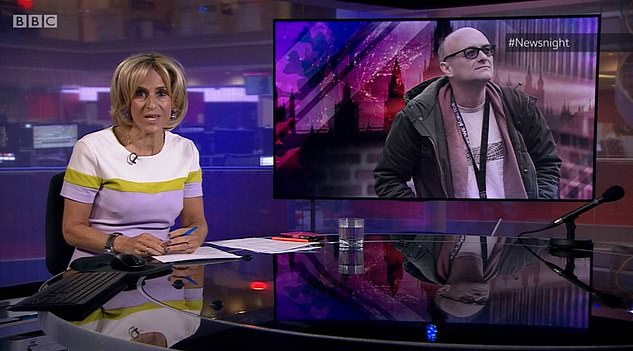 One Newsnight insider said there was ‘complete astonishment’ and ‘fury’ amongst the team about the way BBC bosses had handled the situation. The ‘speed’ at which the corporation put out the statement was ‘unprecedented’ and there had been ‘zero engagement’ between news chiefs and the programme, they said. Bosses had acted ‘partially’ by the taking the Government’s side, the source said.

Ms Maitlis used Newsnight to hit out at claims that coronavirus is a ‘great leveller’ for society as she said the poorest Britons are less likely to survive the pandemic.

She claimed on BBC Two that those most at risk of catching the infection are in low-paid jobs such as bus drivers, nurses and care home workers.

BBC bosses found against Emily Maitlis after an internal investigation  when viewers complained she was ‘sneering and bullying’ towards journalist Rod Liddle during a Brexit debate.

The executive complaints unit at the BBC determined that Ms Maitlis had been too ‘persistent and personal’ during the late night discussion on BBC2 on July 15.

The incident, where she told Mr Liddle to ‘get a grip’ and said his columns contained ‘casual racism’ left her open to claims she had ‘failed to be even-handed’, their report said.

Viewers claimed the presenter’s attitude towards Liddle was systemic of the way the BBC has portrayed Leave voters.

Emily Maitlis said the BBC’s move to uphold a complaint against Naga Munchetty for calling out Donald Trump over racism looked ‘massively out of touch’.

She gave her full support to Munchetty, who had condemned the President’s call for four Democratic congresswomen to go back to their own countries.

The BBC criticised its own broadcaster Ms Maitlis about her performance in last week’s Conservative leadership debate.

A statement appeared on the BBC website saying that the Newsnight presenter was ‘not to everyone’s taste’. But the BBC quickly removed the comment, insisting it was a mistake.

The errant comment was a response to complaints about Maitlis’s performance in last week’s Conservative leadership debate.

Critics said the show turned into ‘an hour of men shouting inanely over each other’, while another said the BBC’s bar-stool format made the Tory MPs look like ‘a bunch of braying morons’.

The broadcaster is named as Newsnight’s new lead presenter and said: ‘I don’t have to be liked’

She was caught on camera  visibly losing her patience with Labour MP Barry Gardiner on Newsnight. The host is seen rolling her eyes and shuffling her papers as he spoke.

She urges male colleagues to join the gender pay gap fight – as women staff at the Corporation went into open revolt.

Ms Maitlis revealed she was once told by a boss at the Corporation she would have to appear on Strictly Come Dancing if she wanted to progress. She previously claimed it is harder for a woman to be taken seriously and be successful at the BBC

The newscaster was spotted wearing a charity wristband in support of the Forces charity Help for Heroes while presenting the news – despite there being a ban on presenters wearing such accessories.

Dr David Starkey called her a ‘disgrace’  after he claimed that Britain had undergone a cultural shift and ‘the whites have become black’ during an interview with Ms Maitlis.

More than 700 people complained to the BBC and a further 103 contacted Ofcom claiming that the comments breached guidelines on racial offence.

Ms Maitlis is named among a host of the BBC’s highest-paid presenters classing themselves as freelancers to avoid paying 50 per cent  income tax.

But other respected broadcasters at the BBC hit out, saying Newsnight needed to stick to the rules like everyone else. One well-known journalist said it was not the role of Newsnight to ‘speak on behalf of the British people’ – because there was not one unanimous view.

The source added: ‘There are the rules and you just have to find a way of dealing with it’. Another respected broadcaster said ‘a bunch of BBC managers were very offended’ by the speech.

The statement also insisted that Ms Maitlis’ speech ‘risked giving the perception that the BBC was taking sides and expressing an opinion, rather than being impartial’.

Ms Maitlis is said to have been so upset by her treatment she asked for the night off on Wednesday, with reporter Katie Razzall standing in.

She also thanked those who had sent messages of support having already retweeted a number of positive comments about her opening speech – with one describing it as ‘savage brilliance’ and another saying she ‘tells it how it is’.

Another she shared said: ‘Emily Maitlis and Newsnight should be praised. There was no bias, just good reporting, investigation, challenging and holding to account. Well done BBC and not just Radio 4 this time. Good. More please.’

Anger flooded in from some incensed by the initial broadcast, which they believed showed bias, while others were furious about the corporation’s rapid climb down, after it issued a statement saying Maitlis had broken the rules.

In an introduction to the current affairs programme, Miss Maitlis opened with a highly-critical speech claiming the public ‘feel like fools’ and accused Boris Johnson of showing ‘blind loyalty’ towards his adviser.

Mr Cummings has been at the centre of a row after it emerged that he had travelled to his parents house in Durham during lockdown – 260 miles from his home in London.

Mr Cummings had ‘broken the rules’ and ‘the country can see that, and it’s shocked the Government cannot’, Miss Maitlis said. The ‘public mood’ is ‘one of fury, contempt and anguish’, she added.

Within 24 hours, the BBC released a statement saying the programme had not met ‘standards of due impartiality’ adding that staff had been ‘reminded of the guidelines’.

The controversy has created huge divisions within the BBC between those who support Newsnight and Ms Maitlis and others who think she broke the rules.

Yesterday the presenter said she had been ‘overwhelmed’ by support from viewers.

Although she had been replaced on Wednesday night’s programme by broadcaster Katie Razzall, she revealed it was her own decision not to appear

Wednesday’s statement is understood to have been signed off by the BBC’s director of news Fran Unsworth and involved the broadcaster’s head of current affairs Joanna Carr.

Last night, some accused the BBC of sexism, noting that other male presenters who ‘editorialise’ had not been hauled over the coals in the same way.

One female BBC journalist said ‘Amongst a lot of women in the BBC there is a feeling that there is a double standard in operation and that they are held up to a higher level of account and due impartiality than some of the men with a high profile’.

A petition entitled ‘Reinstate Emily Maitlis’, even though she has not been dropped from the show, also drew attention to sexism. It read: ‘How can it be just and appropriate that a woman is removed for telling the truth, while an unelected man appears bulletproof even after lying and showing no contrition?’

Last night one Newsnight journalist said: ‘There are a legion of unanswered questions…The speed at which they (the BBC) came to this decision, which was completely unprecedented, with zero engagement, almost zero engagement virtually with the editor let alone with the rest of the team.’

They said: ‘There is complete astonishment and fury’, adding: ‘Acting this way delegitimises everything in the programme that night and the programme’s coverage more generally.’ 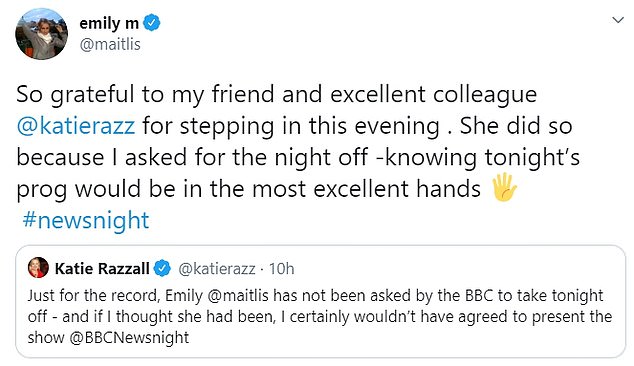 One said: ‘No-one likes to see any colleague hung out to dry like that. That was quite harsh. If you work for the BBC there are the rules and you just have to find a way of dealing with it.

‘We are at a time when we need real public support. I think it is a shame to divide people and make them angry with the BBC as an institution.’

Yesterday Miss Maitlis tweeted: ‘Been overwhelmed by all the kindness, messages – and support on here – and I’ve probably missed much of it. A big thank you from us all at Newsnight.’

The BBC statement about the episode said the programme ‘should have done more to make clear the introduction was a summary of the questions we would examine, with all the accompanying evidence, in the rest of the programme’.

It added: ‘As it was, we believe the introduction we broadcast did not meet our standards of due impartiality.’

Last year, the BBC became embroiled in an impartiality row over on-air comments made by BBC Breakfast presenter Naga Munchetty about US President Donald Trump and racism.

Munchetty was initially judged to have breached BBC editorial guidelines but the ruling was later reversed.