A mother who wants to give her son a traditional Aboriginal burial is battling his estranged wife for custody of his body.

Leonard Milson, 40, took his own life on April 27 and his mother Julie Milson has sued for the right to bury him on country in central NSW.

But his non-indigenous wife Elisha Anderson, 41, wants his remains cremated and some of the ashes used to make pendants as keepsakes for his three children.

Ms Anderson claimed her husband had agreed with this plan, was ’embarrassed’ about his Aboriginal heritage, and ‘did not believe in Sorry Day’.

Ms Milson countered that their marriage was effectively over as Mr Milson had moved out and was having a secret affair with another woman. 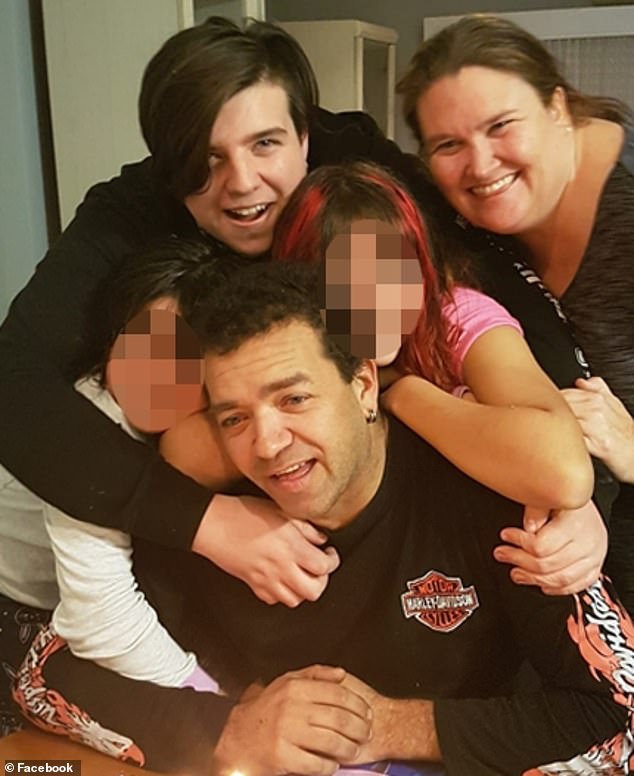 Leonard Milson, 40, with his wife Elisha, his son Christopher, and his three daughters before his death on April 27

The bitter case made it to the NSW Supreme Court where a judge was forced to balance Aboriginal cultural issues with his wife’s wishes.

The court heard the relationship soured after a series of affairs and Mr Milson moved out of the family home in Beresfield, north of Newcastle, on March 17.

However, Mr Milson still spent a lot of time at the home and slept in one of his daughters’ rooms on numerous occasions.

He was having a secret affair since February with a married woman from his bowls club, which Ms Anderson claimed not to have known about until the court case.

On March 22, Mr Milson assaulted his estranged wife at the home, resulting in his arrest on domestic violence charges.

Ms Anderson told police the argument was sparked by her having a man in her bedroom, but she told the court this was a lie to placate Mr Milson.

A restraining order was granted but Ms Anderson continued to let him visit his children and sleep over at the house.

The court heard on the day of his death, Mr Milson went to Amelia’s school to pick up some school supplies, since it was closed due to coronavirus.

He then went to a doctor’s appointment and returned in a distressed state, having been given a prescription for antidepressants but not filled it.

Mr Milson went outside to smoke a cigarette and Ms Anderson heard a loud bang but assumed it was her dogs. Ten minutes later she found him dead in the garage.

When the body was to be released from the coroner, Ms Milson petitioned the court to give her custody of it.

Ms Milson planned to bury her son in the ancestral lands of his Wiradjuri tribe in Gilgandra, near Dubbo, in a traditional Aboriginal ceremony.

She claimed Aboriginal culture was against cremation, no one in their family had ever been cremated, and Mr Milson never said he wanted to be.

‘She also asserted that the deceased’s family would be put to shame if he was cremated and his soul would not be able to rest properly until he was buried on country,’ Justice John Sackar wrote in his judgement.

‘If cremated she and her family would lose all connections to him and there would be nowhere for them to visit him.

‘She does not want any of the ashes if a cremation takes place.’ 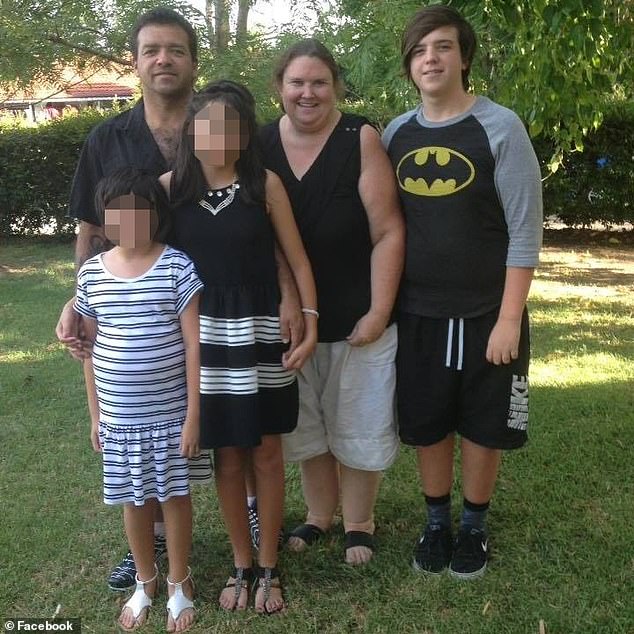 However, Justice Sackar noted legal precedent where experts said an Aboriginal who died off-country could be cremated and the ashes buried on country.

Ms Milson told the court her son’s marriage was ‘well and truly over’ and there was no intention to reconcile.

Ms Anderson said her husband,  in spite of his heritage, told her and his children that he wanted to be cremated.

She said when they were discussing plans for her father’s funeral in 2018, which involved a cremation, his daughters said they would like necklaces made with a portion of his ashes in the pendants.

Ms Anderson also claimed Mr Milson downplayed his heritage to the point where she was ‘unable to say the deceased was a proud Aboriginal man’.

‘He would often say he was embarrassed about being Aboriginal. He also said he did not believe in Sorry Day,’ Justice Sackar summarised.

This was despite Mr Milson having his tribal totem, a sand goanna, tattooed on his arm.

Mr Milson’s son Chris wrote an affidavit and gave testimony in support of his mother’s position and asked that he be given the body if she was not. 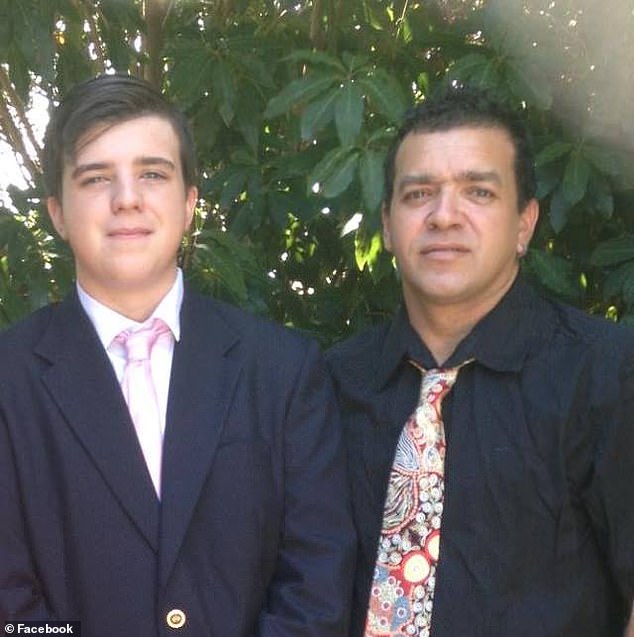 Mr Milson’s son Chris (left, pictured with his father) wrote an affidavit and gave testimony in support of his mother’s position and asked that he be given the body if she was not

When an Australian dies without a will, funeral arrangements are generally determined by the deceased’s partner or children.

However, judges are required to give consideration to Aboriginal culture and spiritual tradition when determining contested matters.

Justice Sackar, in his judgement, began by considering whether the marriage was really over, as Ms Milson asserted.

With Mr Milson dead, he turned to the transcript of Mr Milson’s interview with police after his arrest for domestic violence weeks before his suicide.

He said Mr Milson was ‘depressed and remorseful’ over his actions and told police he was seeking help for his thoughts of self harm and the couple were trying to reconcile.

‘The deceased presents during the interview as a man seriously in distress and in the midst of marital problems and clearly not coping. He is concerned for his family and especially his children,’ Justice Sackar wrote.

‘His own evidence does not in my opinion support the view that the marriage was at an end.’

By contrast, his affair was ‘at the very best in its infancy’ and dismissed her testimony that they discussed wedding plans as ‘fanciful’.

‘Sadly, whatever relationship he may have had with Ms Bojkowski was entirely insufficient to get him through his depression. He felt he had no other way out but to take his life,’ Justice Sackar wrote.

Mr Milson also never told his mother of his mental struggles and assured her he would not kill himself after Ms Anderson told her of her concerns.

Mr Milson’s wife  wife Elisha Anderson, 41, wants his remains cremated and some of the ashes used to make pendants as keepsakes for his three children

Justice Sackar ruled that it was his wife with whom Mr Milson ‘shared his worries, anger and despair’, and not his mother or his lover.

More importantly, he ruled that Mr Milson’s agreement that he should be cremated indicated his true wishes, which should be respected.

‘Clearly not unmindful and notwithstanding his respect for his heritage, he put his family above it for entirely sentimental reasons.