A young mother who refused to shake Scott Morrison‘s hand after her home was razed by flames during Australia’s unprecedented bushfire season has told of how she is still living in a van with her newborn baby.

Volunteer firefighter Zoey Salucci-McDermott, 21, and her partner Michael lost their rental property on New Year’s Eve when bushfires tore through the town of Cobargo on the New South Wales south coast.

On January 2, Ms Salucci-McDermott made international headlines when she was filmed refusing to shake the prime minister’s hand when he visited the town, demanding he provide more funding to the New South Wales Rural Fire Service.

Mr Morrison yanked the 28-weeks pregnant woman’s hand as she spoke, before briefly patting her on the shoulder and moving on to speak to someone else.

More than six months on from the fatal bushfires that swept through her small town Ms Salucci-McDermott – who also has a two-year-old daughter Uma – said her young family’s housing situation was still uncertain. 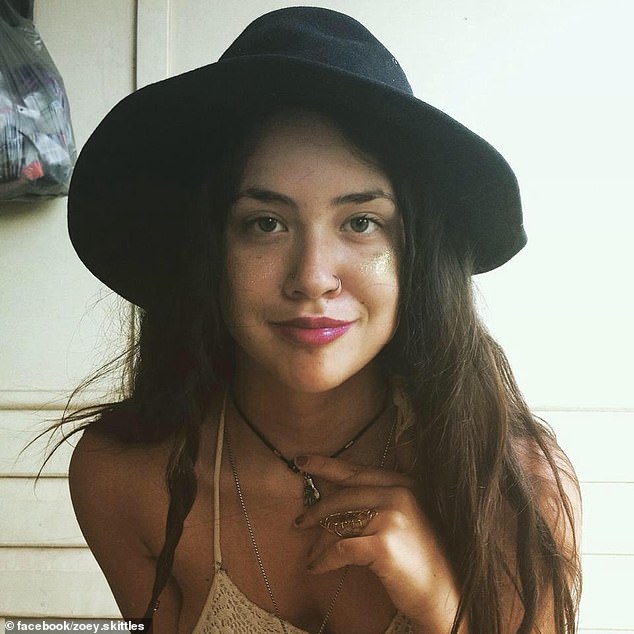 Zoey Salucci-McDermott, 21, (pictured) and her partner Michael lost their rental property on New Year’s Eve of last year when their home was razed by flames which swept through their tiny New South Wales town of Cobargo

‘Currently we’re living in a van which has been donated from some beautiful people who were strangers but I now consider them family,’ she told SBS News.

‘So, that’s where we’re currently living. And at the moment we’re not really sure where we’re going or what we’re doing.

‘It’s just living in everyday at the moment. I like to remind myself that it’s hard for us right now but at least we have this beautiful space, this bigger than average van that we’re living in with them. I like to stay humble for that fact.’

Ms Salucci-McDermott said while she still experiences ‘a lot of sadness and depression’, the birth of her baby son Phoenix has brought joy to an otherwise disastrous six months.

‘I used to call this year ”the worst year that’s happened so far” but I can’t, because he’s one of the best things to ever happen,’ she said.

‘He’s been so amazing – such a good baby. After all that’s happened, if it wasn’t for him we’d be in a dark place.

‘He’s come at the perfect time. A lot of people of said to me “what a horrible time to have a baby”, but to me there’s been no better time to have him.’

The mother also called on Mr Morrison to come back to the town to see the damage the bushfires have wrought on the small town – which was one of the worst affected during the 2019/20 horror season.

The town of fewer than 800 people lost several buildings on its main street, while a local father and son were killed trying to defend their home.

Patrick, 29, and Robert Salway, 63, were killed while trying to protect their 600-acre home in the tiny farming hamlet of Wandella near Cobargo. 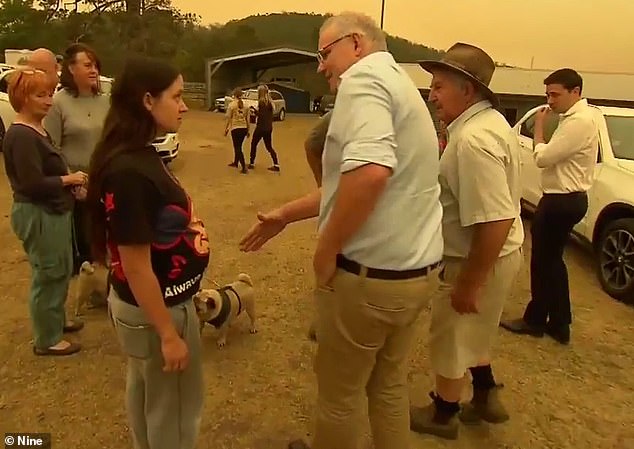 ‘My message [to Scott Morrison] now would be… come and visit this area and see who is missing out and who is receiving,’ she said.

‘I’ve heard of a few people, business-wise, aren’t eligible for grants even though they’ve been burnt out.’

A fundraiser launched at the time of the fires by freelance photographer Sean Davey described Ms Salucci-McDermott’s experience during the bushfires as ‘harrowing’. 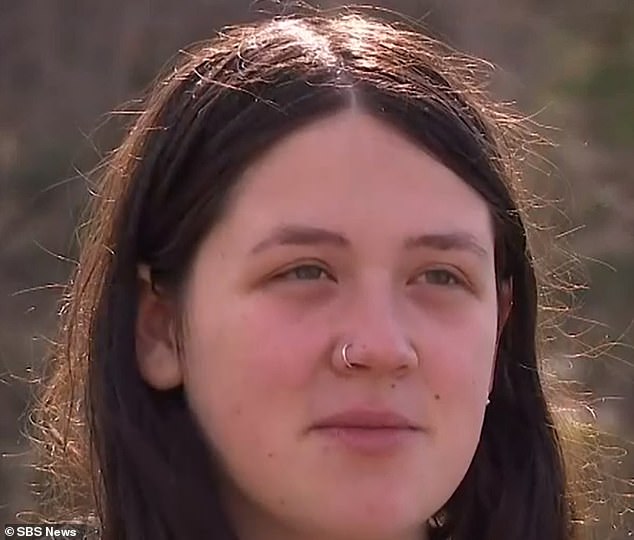 At that point, the family were staying with her mother at her Cobargo home which narrowly avoided being destroyed by the blaze.

‘There is so much to say about this young woman I don’t know where to start,’ his GoFundMe post – which has drawn donations of nearly $32,000 – read.

‘Thoughtful, compassionate, strong, eloquent are only a few words that I can think of right now, yet there are so many more.’ 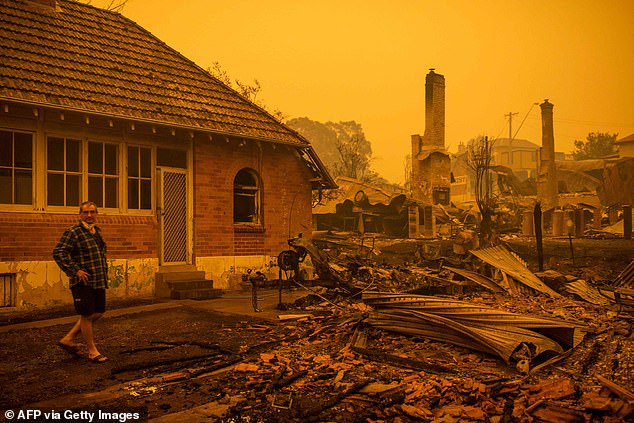 A Cobargo resident, Gary Hinton, looks lost as he stands by rubble after a fire tore through the town on New Year’s Eve

On the same day Mr Morrison was spurned by the young woman, he was also abused by angry Cobargo residents who told him he ‘should be ashamed of himself’ while others called him ‘Scum-mo’ for ‘leaving the country to burn’.

The prime minister’s popularity has since surged amid his government’s handling of the coronavirus crisis.

Ms Salucci-McDermott’s home was one of almost 2,500 which burned in New South Wales during that season. 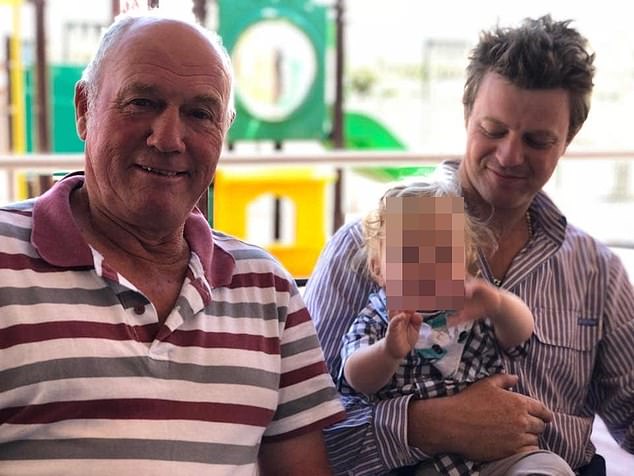 Patrick, 29, (right) and Robert Salway, 63, (left) were killed while trying to protect their 600-acre home near Cobargo during the NSW South Coast’s horrific bushfires