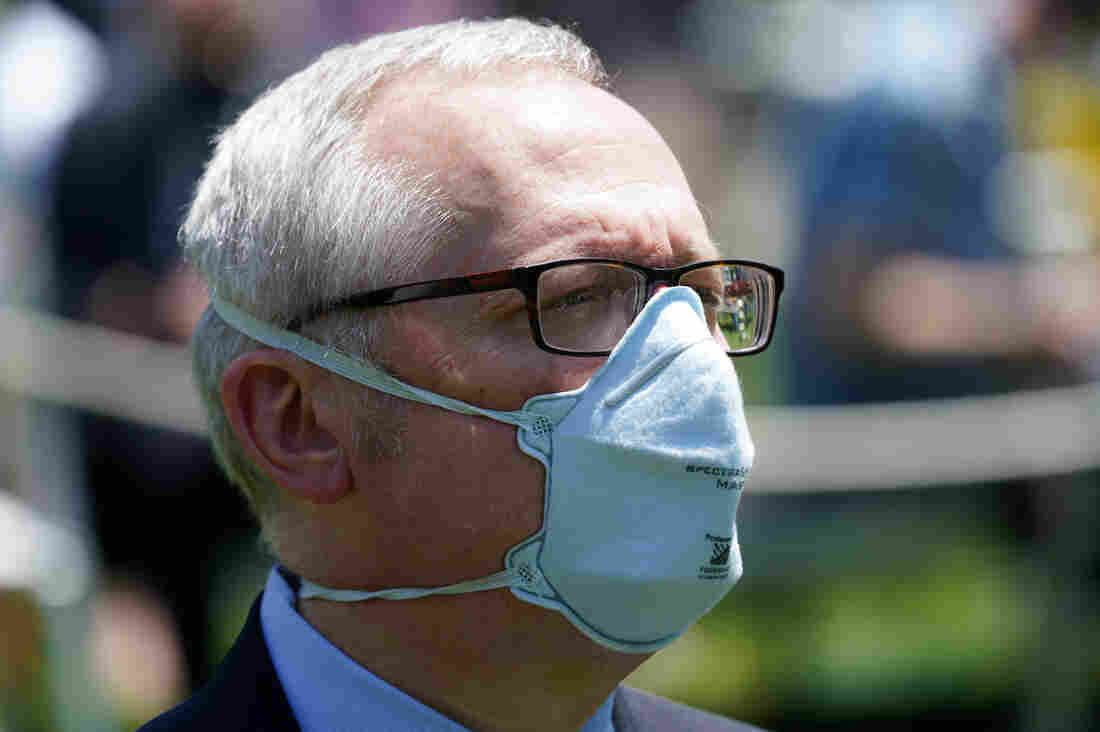 Michael Caputo, pictured at a White House event, is taking a 60-day leave of absence from his job as lead spokesperson for the Department of Health and Human Services, after alleging Trump opponents have interfered in the coronavirus response. Kevin Lamarque/Reuters hide caption

Michael Caputo, the top spokesperson for the Department of Health and Human Services and a longtime Trump ally, is taking a 60-day leave of absence after a social media tirade in which he falsely accused government scientists of engaging in “sedition.”

The leave was announced by HHS in a news release Wednesday, which said Caputo decided to take the two months off from his position as assistant secretary of public affairs “to focus on his health and the well-being of his family.” In a statement, Caputo described the situation as a medical leave for “a lymphatic issue discovered last week.”

The leave of absence effectively removes Caputo from government operations through November’s election. The statement also announced that Paul Alexander, who Caputo had brought in as a scientific advisor, would be leaving the department altogether.

Last week, Caputo came under fire after reports that he and Alexander sought to edit and delay public health reports from the CDC. Emails from Alexander obtained by Politico complained to CDC director Robert Redfield that the agency’s Morbidity and Mortality Weekly Report “hurt the President,” and described data-based publications on the risk of coronavirus in children as “hit pieces on the administration” that undermined the president’s school reopening plan. NPR has confirmed Politico’s reporting.

Regarding the reports of interference with the publication, “It’s very concerning, if people who are really motivated by politics and not by science and don’t have a scientific background are suddenly interfering,” says Dr. Erin Marcus, a physician at the University of Miami Health System and Public Voices fellow. “These actions have real effects on the health of our population and on our ability to function as physicians.”

In a Facebook Live video streamed on his personal page on Sunday, Caputo described a conspiracy in which policymakers, the media, and “deep state” scientists are keeping Americans sick with COVID-19 to improve the Democrats’ chances of winning November’s presidential election. He accused “scientists who work for this government” of “sacrificing lives” for personal gain, and of engaging in “sedition.” His language echoed an August 22 tweet from Trump accusing “the deep state, or whoever, over at the FDA” of deliberately delaying the recruitment of clinical trial participants for COVID-19 drugs and vaccines to hurt his chances of reelection. There is no credible evidence for these theories.

Caputo’s video, subsequently deleted, was first reported Monday by the New York Times. Clips from the video were later published by Yahoo News.

Caputo is a longtime Republican consultant who specializes in public relations. He joined HHS in mid-April, at a time when the Trump Administration was under heavy criticism for its handling of the pandemic. White House observers considered his appointment a move by the president to gain more control over the U.S. health department. In his five-month tenure as the top communications official, Caputo shaped messages from health agencies to align with the Trump Administration’s political messaging in the heat of the COVID-19 pandemic.

Caputo is considered a Trump loyalist who worked as a communications director for Trump’s presidential campaign in 2016 — a role he resigned from after sending a public tweet celebrating Trump campaign manager Corey Lewandowski’s exit from the campaign.

While Caputo’s social media tirade was highly unusual for a government spokesperson, Caputo promoted conspiracy theories about politics in Washington before he joined the administration. In a March 13 episode of his former podcast “Still Standing,” first reported by Media Matters, he said Democrats wanted Americans to die from COVID-19 so they could unseat Trump in the next election. “How much does our economy have to die and how many Americans have to die for these Democrats to get what they want?” he asked rhetorically.

Caputo had previously been investigated for his ties to Russia, where he lived in the 1990s and served as an adviser to the Russian government during the Justice Department investigation into collusion between the Trump campaign and Russia during the 2016 presidential election campaign. In 2020, prior to joining the administration, Caputo released a book and a documentary called “The Ukraine Hoax,” pushing discredited claims that Ukraine’s government — and not Russia’s — had interfered with the 2016 U.S. presidential elections.