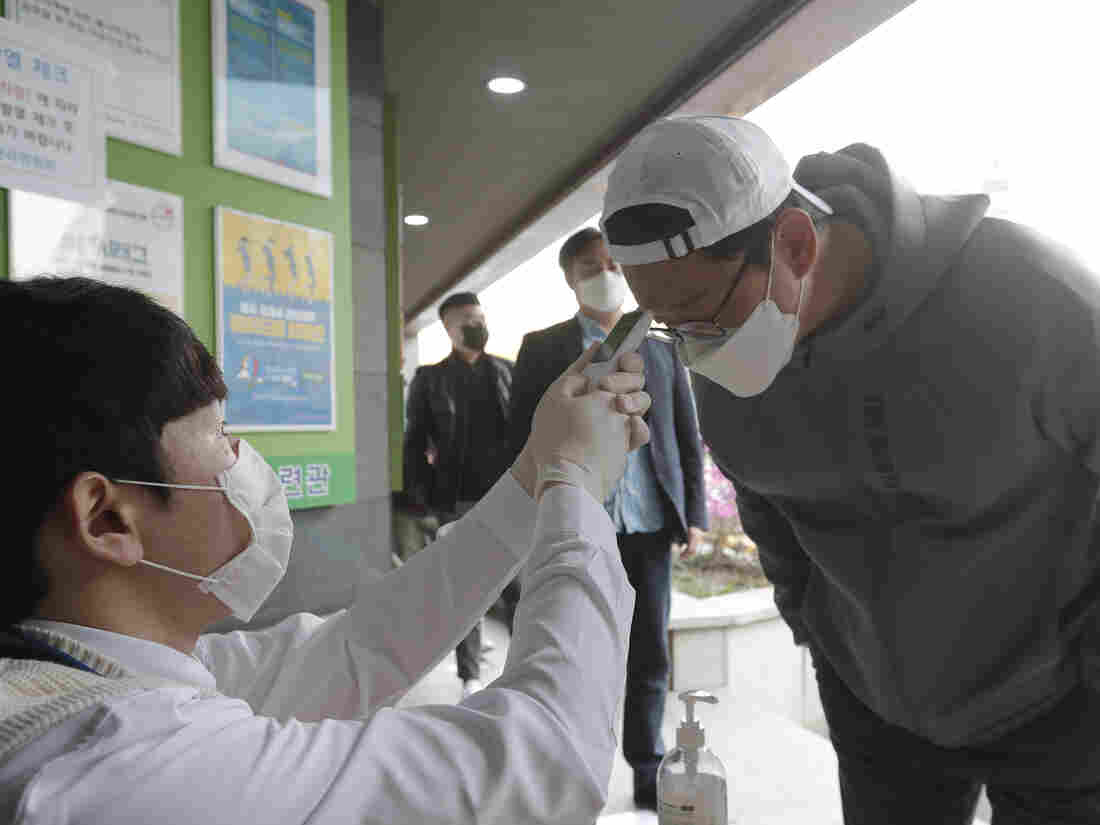 A man wearing a face mask to help protect against the spread of the new coronavirus has his temperature checked upon his arrival to cast his vote for parliamentary at a polling station in Seoul, South Korea, on Wednesday. Ahn Young-joon/AP hide caption

In an early demonstration of how a government’s response to an epidemic can alter the political landscape, South Korea’s ruling, center-left Democratic Party scored a landslide victory in legislative elections Wednesday, largely on the strength of its success in tackling COVID-19.

“We believe South Korea was the first country to hold a nationwide election in the middle of this pandemic,” Vice Health Minister Kim Ganglip told reporters Thursday, adding: “It wasn’t an easy task to strike a balance between guaranteeing voting rights and ensuring safety.”

All voters were required to have their temperatures taken at polling stations, use hand sanitizer and wear face masks and plastic gloves. Voters with fevers were given their own voting booths, which were sanitized after each use.

Roughly a quarter of the some 60,000 South Koreans under self-quarantine were allowed out of isolation to vote after polls had closed. Some were escorted by local officials. They were instructed to stand 6.5 feet from each other, double the distance of other voters.

But South Korea has made notable progress in containing the virus. After a peak of more than 900 new cases a day in late February, new coronavirus infections have declined to below 30 per day this week. Mortality from COVID-19 in South Korea is around 2%, compared to a global average of more than 6%.

The South Korean president’s party captured a three-fifths majority in the 300-member, unicameral legislature, giving Moon a stronger mandate for the remaining two years of his five-year term. He should be able to enact legislation with little or no help from other parties.

“This election will be a moment that sets a fresh agenda, completely different from what President Moon started with,” says Lee Eun-young, director of the Seoul-based Korea Public Opinion Lab. “The previous issues will no longer look important.”

And if South Korea’s situation remains challenging, it certainly looks better in comparison to other countries, whose health systems have buckled under the influx of patients. World leaders (and a rock star) have sought Moon’s advice and assistance.

Meanwhile, Moon’s political persona, which projects competence, not charisma, seems to have served him well.

“Moon has shown steady leadership, trying to remain above the fray of partisanship and scandal while emphasizing a science-based, collective response to the pandemic,” Ewha Womans University in Seoul Prof. Leif-Eric Easley comments. “He has also represented South Korea on the international stage as a positive example of policy planning, implementation and cooperation.”

Moon has ceded much of the public limelight to Korea Centers for Disease Control and Prevention Director Jung Eun-kyeong, an infectious diseases expert who, speaking to reporters in a yellow jumpsuit, has become the public face of South Korea’s battle against COVID-19.

On the economic front, Lee Eun Young of the Korea Public Opinion Lab notes that Moon moved quickly last month to announce “disaster relief payments” to households, well before the pandemic’s full economic impact was felt. This week, the cabinet approved payments of about $820 to all but the richest 30% of the population.

Not all voters embraced Moon and his party, though. Outside her local voting station in Seoul, one 83-year-old homemaker, who gave only her family name, Choi, questioned whether the promised money would materialize.

“I don’t feel like I’ve received any help from the government,” she sniffed. “The world is praising South Korea’s response, but I think it’s the people here who have done a great job.”