By Danyal Hussain and James Fielding For Mailonline

Iron Maiden star Bruce Dickinson was ‘stunned’ by the sudden death of his estranged wife, with friends saying the rocker thought she was ‘happier and more settled’.

Tragic Patrice Bowden, 58, – known as Paddy – was found dead at her £3 million gated townhouse in Chiswick, west London, which she shared with the rock star before he moved out.

But friends say that, despite the split, Mr Dickinson’s relationship with his estranged wife had been ‘much improved’ in the months leading up to her death.

The former couple were in a ‘good place’ and Mr Dickinson thought Paddy was happier and more settled.

He was shocked by news of her death, the source added.

It comes as friends told MailOnline on Monday that Paddy had hid herself away in her £3million home in the months leading up to her death on Monday.

She is thought to have been found by her housekeeper. 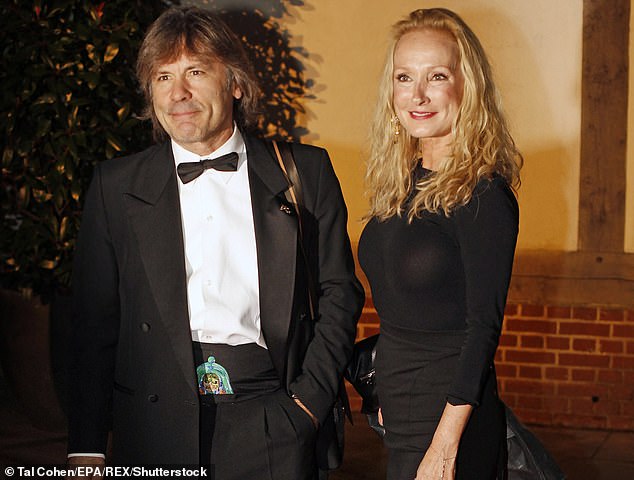 The estranged wife of Iron Maiden frontman Bruce Dickinson Patrice Bowden shut herself away in her £3million home in the months leading up to her death yesterday, friends told MailOnline today. Pictured: The couple together in 2013 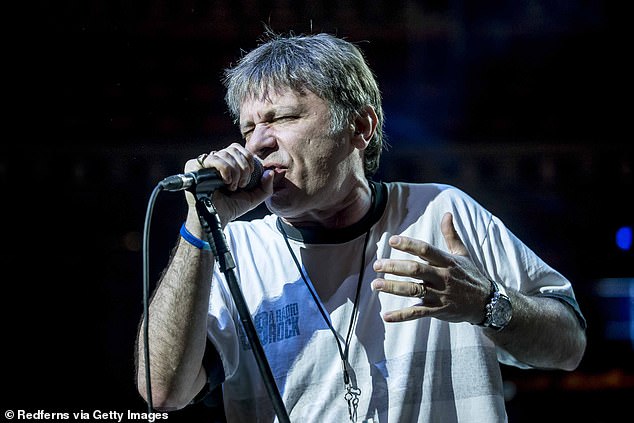 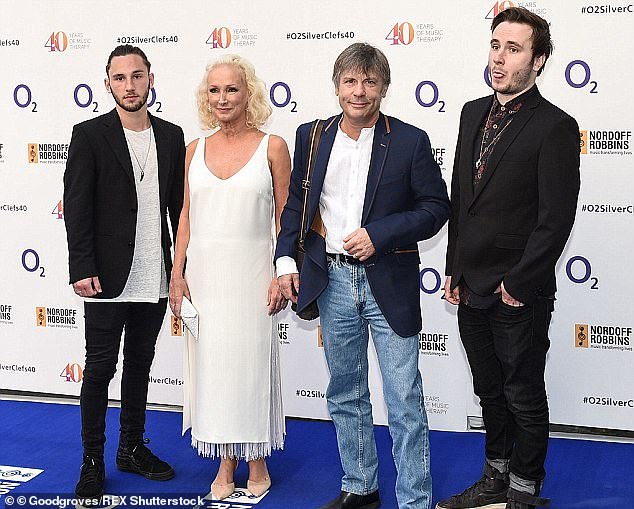 Iron Maiden frontman Bruce Dickinson’s son Austin (right, in 2015) said he ‘hasn’t even got the words’ following the death of his mother Patrice Bowden (second left). Left: The former-couple’s other son Griffin 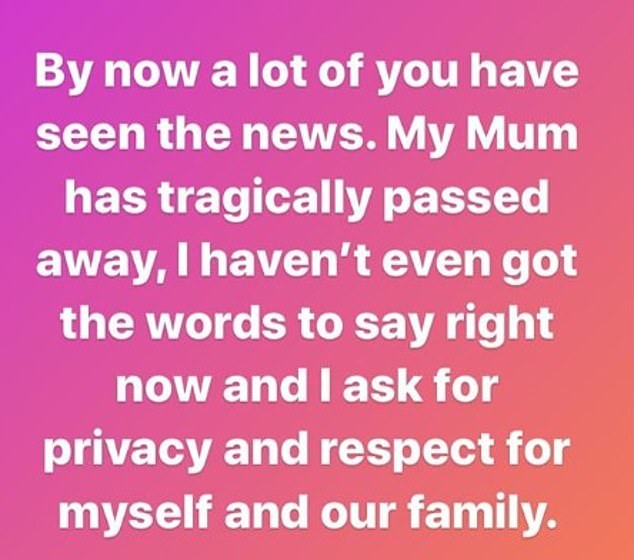 A friend told the Sun: ‘Paddy has had her issues and of course the divorce was difficult, as it would be for anyone, but actually things between her and Bruce were much better.

‘She’s taken some time away and he was living in Paris but their divorce was progressing surprisingly smoothly and the family remain close as a whole, so Bruce hoped she might be happier and more settled.’

According to neighbours, Mrs Bowden, 58, had been a ‘very private person’ who had rarely been seen since her split with Dickinson last November.

One, who asked not to be named, said that her friends had mentioned she had been ‘depressed’ following her marriage breakdown, though a family statement on behalf of Dickinson described her death as a ‘tragic accident’.

The former-couple’s son Austin Dickinson wrote in a heart-breaking post on Instagram: ‘By now a lot of you have seen the news.

‘My mum has tragically passed away, I haven’t even got the words to say right now and I ask for privacy and respect for myself and our family.’

An ambulance was called just at 9.42am yesterday, followed by a police car and then a private ambulance, which took Ms Bowden’s body away about two-hours later. 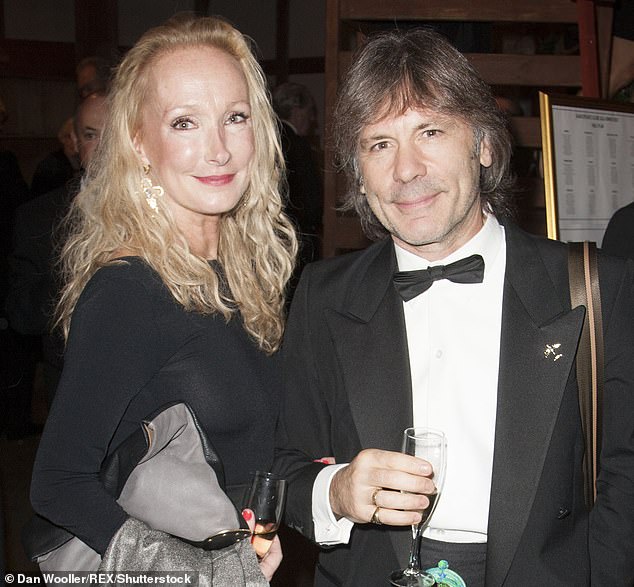 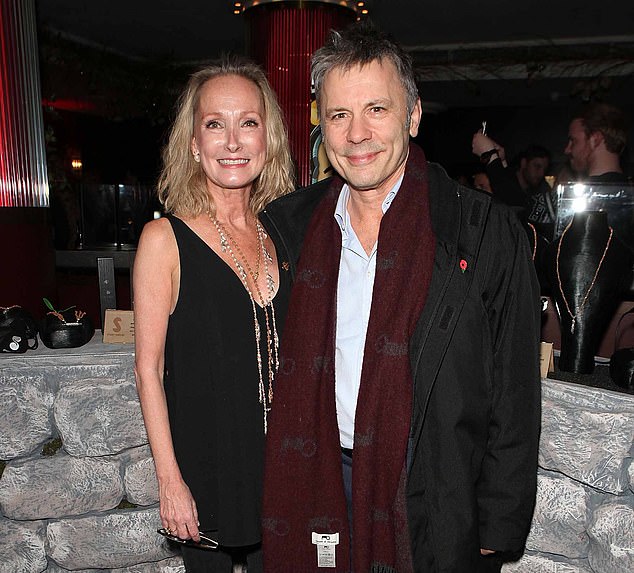 Ms Bowden is thought to have lived at the property, which has a recording studio at the back, by herself.

One neighbour said today: ‘She was a really nice, down-to-earth lady with a very sweet nature and who gave off a sort of hippy-vibe.

‘But I hadn’t seen her in a while, she didn’t go out as much since the split with her husband.

‘According to some of her friends she’d been a bit down lately, a little depressed.

‘I have to say that on the odd occasion I saw her she looked ok but I didn’t know her as well as others did.

‘It’s an awful thing to happen. My heart goes out to her family. As far as I know, she lived in that big house by herself but some of her children were waiting outside the property yesterday with the paramedics and police.

‘One of them, a girl aged in her 20s, was really upset and was being consoled by someone. 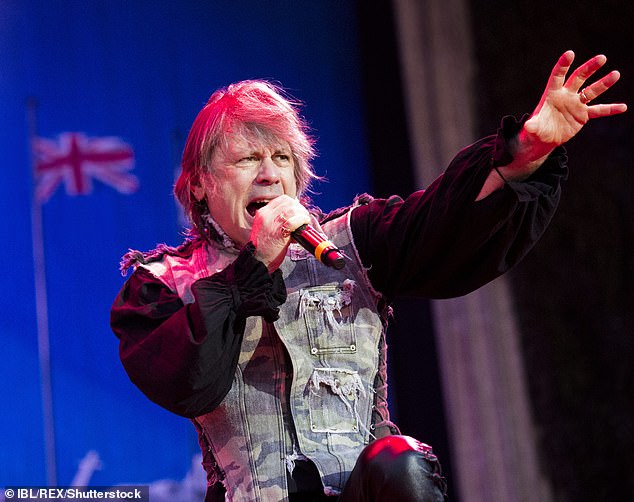 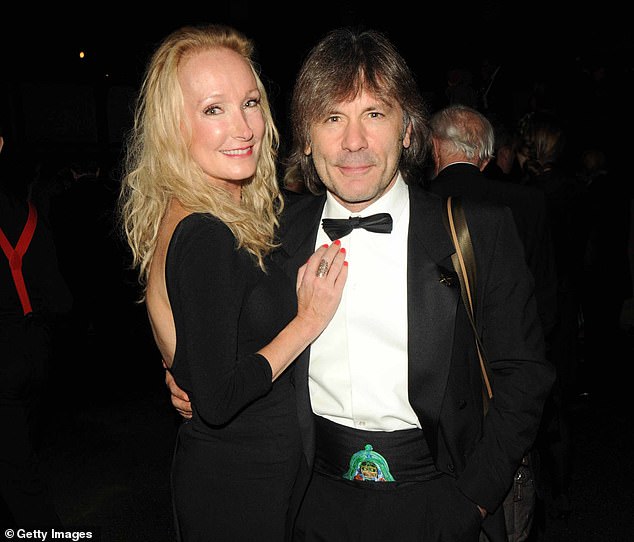 ‘There was the house keeper there as well. She was given a lengthy statement to a police officer.

‘At first we thought that it could be a Coronavirus-related death as only the police were entering the house in protective gear but I think they were forensics. I don’t know what the cause of death is.’

Ms Bowden’s house is surrounded by a six-foot wooden fence and gate.

Mr Dickinson is said to have had it built to stop prying heavy metal fans peering into their home.

Another neighbour told MailOnline: ‘Paddy was a very private woman, she kept very much to herself. 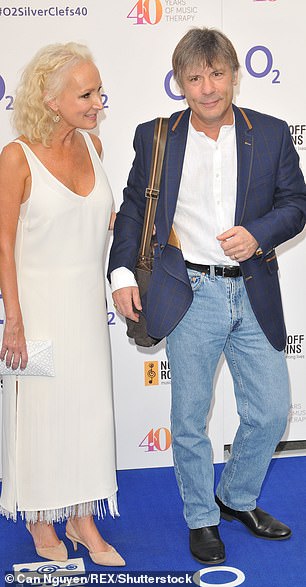 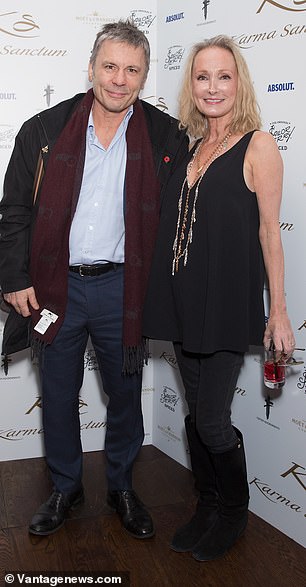 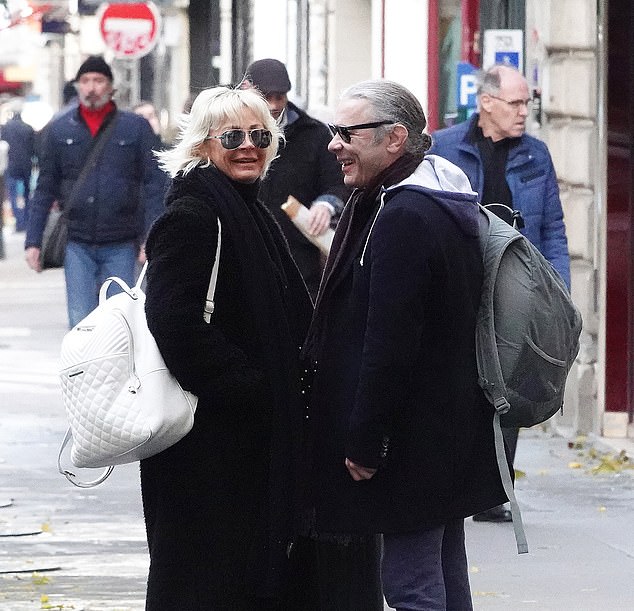 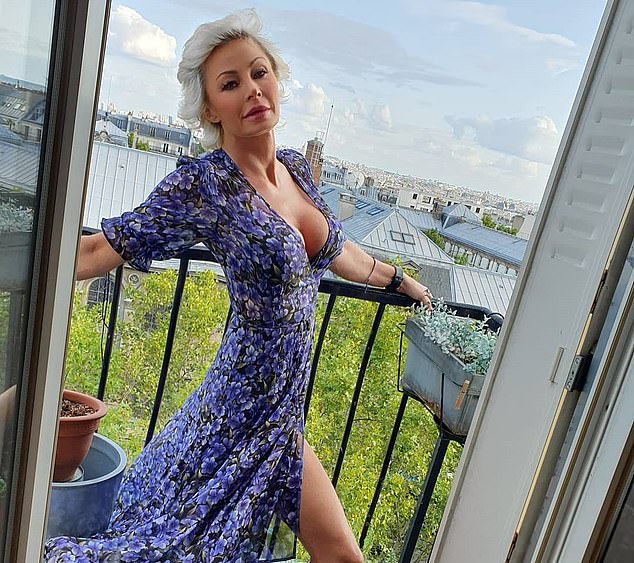 After news of their relationship broke, a friend of Leana’s told The Mirror at the time: ‘Leana (pictured) has always been a huge Iron Maiden fan, following them around for nearly 10 years’ 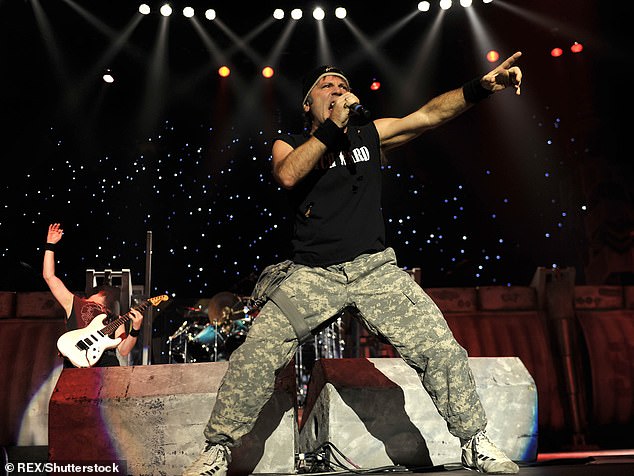 Dickinson (pictured), who left the band in 1993 only to re-join in 1999, is known for his on-stage energy and vocal range 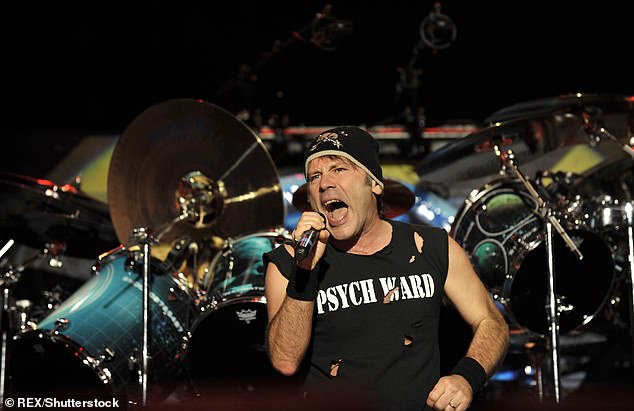 The frontman (pictured in Dublin, Ireland in 2010) battled stage 3 throat cancer in 2015 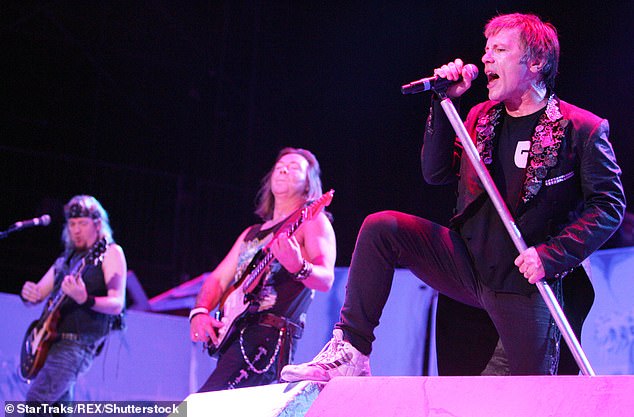 Iron Maiden were formed in Leyton, east London, in 1975 and have sold over 100 million copies of their albums

‘She kind of shut herself away in that house, beyond the big fence and gates, and we didn’t see much of her.

‘We saw very little of her when she and Bruce were together – even less when she was on her own.

‘She was just a nice lady, someone who’d you’d nod to and say hello.’

Dickinson, 61, and his ex-wife, who have three children together, sons Austin, 29, Griffin, 27 and daughter Kia, 28, parted ways in a shock divorce estimated to be worth £90 million.

In a heartfelt statement, Dickinson said: ‘This is a terrible tragedy which appears to be a tragic accident. Our children Austin, Griffin and Kia and I are devastated. 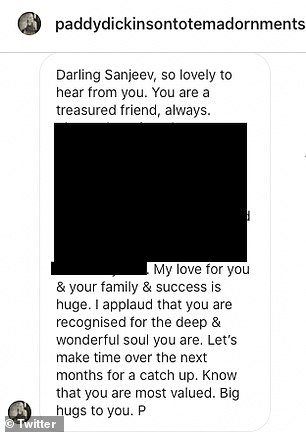 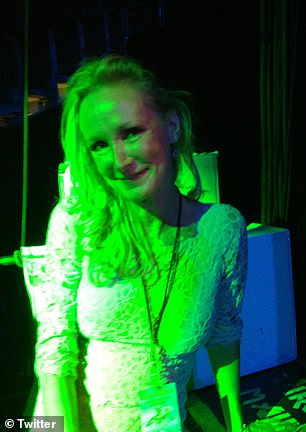 Comedian Sanjeev Bhaskar took to Twitter to share his last message from Bowden, who he called a ‘wonderful and ever-supportive friend’

‘Out of respect for Paddy we won’t be making any further comment at this hugely difficult and painful time for our family.’

The London Ambulance Service also confirmed they had attended the scene but that the patient was pronounced dead on arrival.

A spokesperson said: ‘We were called at 9.42am today to reports of a person unwell in Barrowgate Road, Chiswick.

We sent two ambulance crews to the scene – the first one arriving within two minutes.

‘Sadly, the patient had already died.’

The Iron Maiden frontman, who was previously married to Jane Dickinson, tied the knot with Bowden, who was a psychotherapist by trade, in 1990 after dating for two years.

However in November 2019, it was reported that the musician had quietly parted ways with Ms Bowden and was facing a multi-million pound divorce battle.

It was later revealed that Dickinson had moved out of the marital home to relocate to Paris after forming a relationship with the ‘fitness teacher, journalist and fashion blogger’ Leana Dolci, who is thought to be in her 40s.

The frontman’s sons have followed in their father’s musical footsteps, with Austin the lead singer of the heavy metal band Rise to Remain until their split in 2015 and Griffin the vocalist of the metalcore band SHVPES.

Iron Maiden were formed in Leyton, east London, in 1975 and have sold more than 100 million copies of their albums and won multiple awards, making them one of the most successful heavy metal bands of all time.

In light of the coronavirus pandemic the band recently announced they would cancel their Legacy of the Beast World Tour until June 2021. 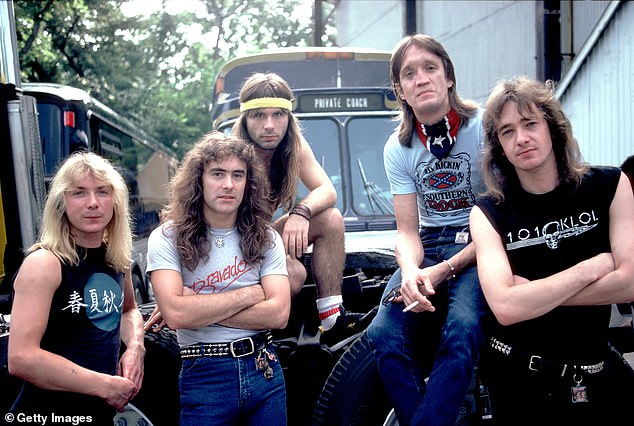 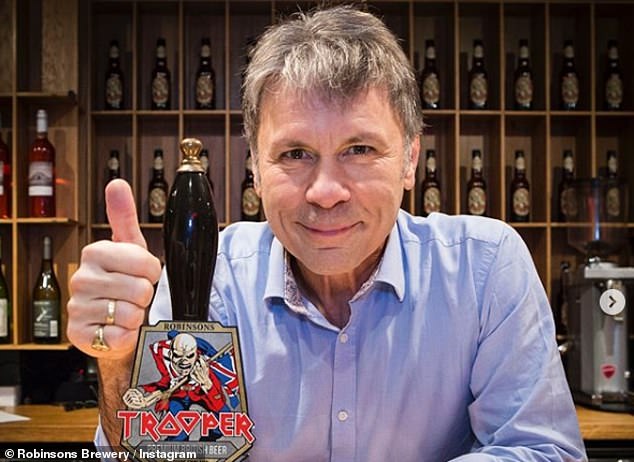 The musician (pictured) and his wife split in November, 29 years after they got married. Their shock divorce was estimated to be worth £90 million

A message on their website read: ‘Due to the continuing health issues Worldwide around Covid-19 we regretfully inform you that Iron Maiden will now not be playing any concerts until June 2021.’

They added: ‘The band are all fine and send you guys their best wishes, they are very much looking forward to getting back on stage next year and seeing you all so, please, continue to take care of yourselves and stay SMART.’

Dickinson, who also flies Iron Maiden while on tour on the band’s Boeing 747, Ed Force One, is also a beer brewer, scriptwriter, novelist, a BBC radio presenter and entrepreneur as well as a world-class fencer.

The singer still remains active touring with the rock band who have penned hits including Run To The Hills and Can I Play With Madness.

He also chairs an aviation firm in the Vale of Glamorgan that is set to receive millions of pounds in new investment.

In 2014, Dickinson confirmed that he had boycotted Glastonbury for being ‘too bourgeois’.

He said at the time: ‘Personally I have no interest in going to Glastonbury. In the days when Glasto was an alternative festival it was quite interesting, but anywhere Gwyneth Paltrow goes and you can live in an air-conditioned yurt is not for me.’

Last year, the musician revealed that his next solo album would be released in 2020 during an interview with Argentina’s Clarin magazine.