Wonders Down Under: New Zealand Prime Minister declares the country is beating coronavirus and prepares to lift strict lockdown in a week as Australian measures squash curve as well

New Zealand’s prime minister Jacinda Ardern says her country is winning the battle against coronavirus after just 29 new cases were added to the tally today.

The PM hailed New Zealanders for mounting a ‘wall of defence’ which is ‘breaking the chain of transmission’ after the country moved quickly to impose a lockdown.

Ardern said the country was already ‘turning a corner’ just six weeks after the epidemic reached New Zealand, which has only 992 confirmed cases and one death so far.

The figure of 29 confirmed or probable infections in the last 24 hours marks a fourth straight day of decline, and lockdown measures could be lifted in just over a week as the curve flattens.

New Zealand only confirmed its first case on February 26, but had shut its borders by March 19 and started imposing a lockdown on March 26.

Australia has also squashed the curve, with both countries carrying out more widespread tests than Britain or the United States. 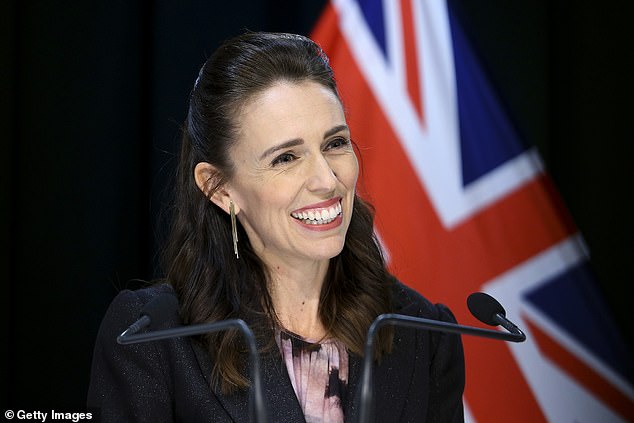 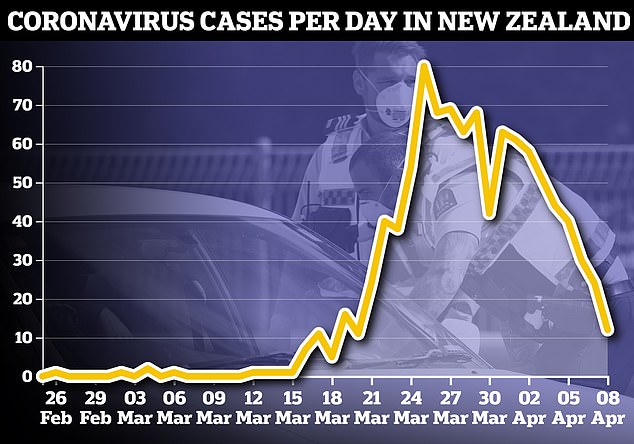 This graph shows the daily number of confirmed cases each day in New Zealand, according to figures from the government health ministry 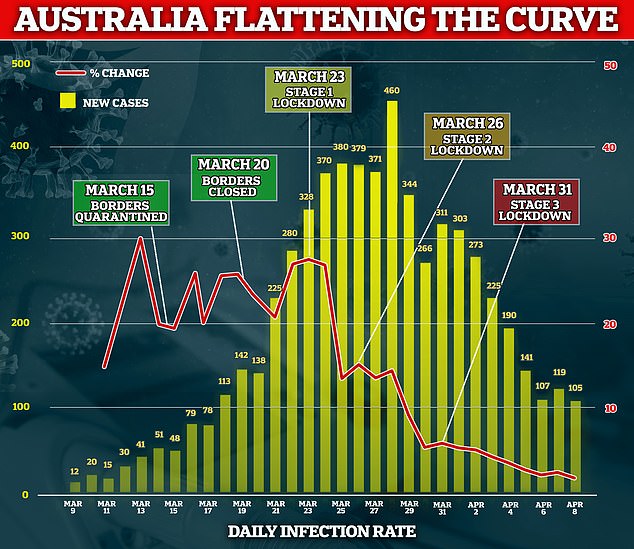 This graph shows the flattening curve in Australia, where drastic measures were imposed at an earlier stage than in much of Europe

How Australia and New Zealand are leading the way in testing

Ardern praised New Zealanders for ‘breaking the chain of transmission’ in the first half of a four-week lockdown.

‘At the halfway mark I have no hesitation in saying, that what New Zealanders have done over the last two weeks is huge,’ she said.

‘In the face of the greatest threat to human health we have seen in over a century, Kiwis have quietly and collectively implemented a nationwide wall of defence.

‘You are breaking the chain of transmission. And you did it for each other.’

Warning against complacency, she added: ‘As we head in to Easter I say thank you to you and your bubble.

‘We have what we need to win this marathon. You have stayed calm, you’ve been strong, you’ve saved lives, and now we need to keep going.’

Ardern says her government will decie on April 20 whether to extend or relax the lockdown, which is currently due to expire at midnight on April 22.

New Zealand began testing for the virus as long ago as January 22, although it did not confirm a positive case until February 26.

The government then began taking drastic public health measures in mid-March, even when it had relatively few cases of the disease.

As early as March 14, all new arrivals into New Zealand were ordered into self-isolation, while cruise ships were banned.

The country had only 32 confirmed cases on March 18, when Ardern announced that all non-residents and non-citizens were banned from entering New Zealand.

Gatherings of more than 100 people have also been banned since March 19.

Ardern announced a total lockdown on March 25, at which point there were 295 confirmed cases.

Schools and non-essential businesses including bars, restaurants and cafes have been shut down since March 26.

Ardern has urged people to stay at home – although she had to demote her health minister after he broke social distancing rules by driving his family to the beach.

The government’s official count shows that only 12 positive tests were added to the figures yesterday, the eighth straight day of decline by that measurement. 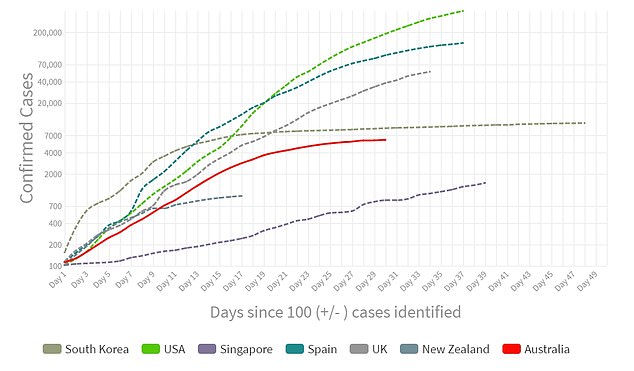 This graph shows COVID-19 infections in the days since 100 cases were confirmed in (from top to bottom) the USA, Spain, the UK, South Korea, Australia, New Zealand and Singapore 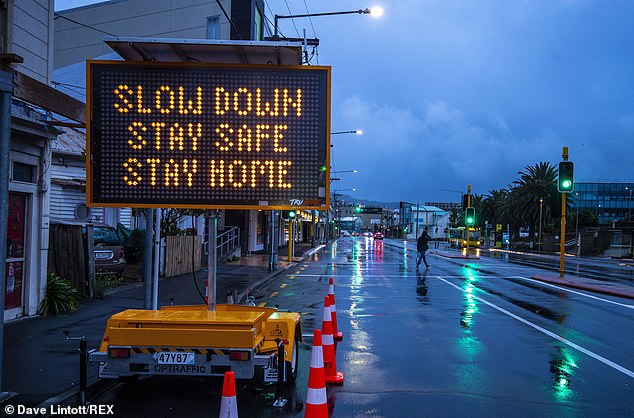 New Zealand is currently testing around 3,500 people a day, according to government figures.

For comparison, the UK carried out around 15,000 tests on Tuesday – only four times as many for a population which is 13 times larger.

Britain would need to be testing nearly 50,000 people per day to match New Zealand’s level of screening.

The testing regime in New Zealand has increased in recent days, with around 25,000 tests carried out since the start of April.

The government says it has more than 47,000 testing kits in stock, almost as many as the 51,165 tests carried out so far.

New Zealand has also published very detailed figures on its government website, even including probable cases which have not been confirmed.

Every case is listed with an age group, a rough location and – where relevant – the details of that person’s recent international travel, including their flight number.

Most countries have not published a count of suspected cases. New Zealand has 1,239 cases if they are included, with 992 of them confirmed.

One Kiwi has died to date, an elderly South Island woman. Health officials said she was in her 70s and had initially been diagnosed with influenza. 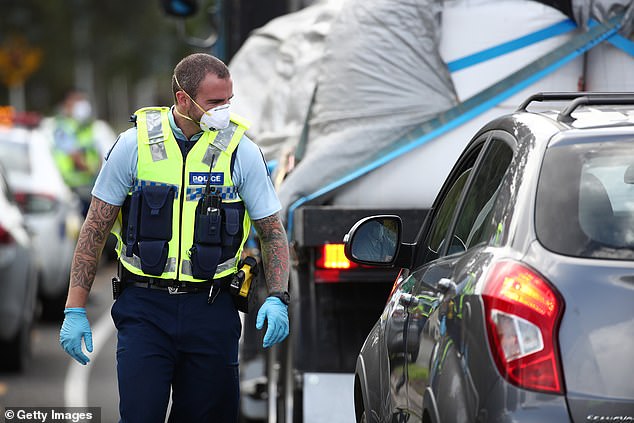 Police in New Zealand are seen stopping vehicles on the state highway at Warkworth on Thursday (pictured), ensuring those travelling are doing so for essential reasons

Meanwhile, Australia also appears to be flattening the curve with only 51 deaths and 6,089 cases recorded so far.

Border closures and Australia’s decision to ignore the World Health Organisation’s early insistence there was no need to restrict travel to and from China also seems to have protected the country from a worst-case scenario of 150,000 deaths.

Australia has carried out more tests outright than Britain, despite having a population of only 25.4million compared to the UK’s 66.4million.

Professor Tony Blakely, epidemiologist and public health medicine specialist at the University of Melbourne, said Australia had done better than he expected.

‘We’ve actually managed to get to the case load down enormously. Very impressive. Well done.’ 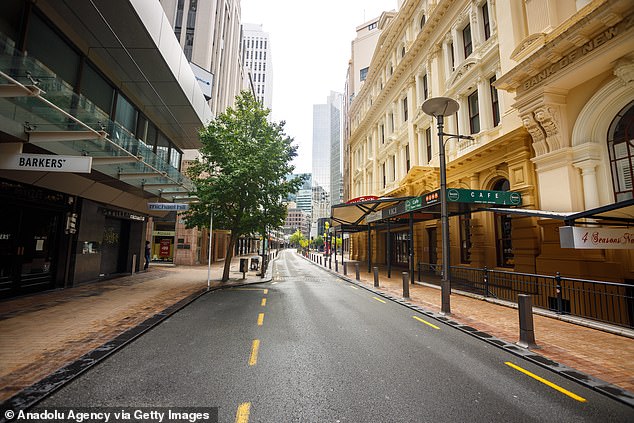 An empty Lambton Quay, Wellington’s main shopping district, is seen on April 3 (pictured) as the country went into lockdown

As an island continent which can only be reached by long sea or air travel from most of the world, Australia should have some natural advantages in fighting pandemics.

Professor Blakely said Australia’s lower infections rate compared with countries such as the US and the UK could in part be put down to the country’s geographic isolation.

Australians ‘happy’ with handling of COVID-19

Almost two thirds of Australians (65 per cent) say the federal government is handling COVID-19 well, according to Roy Morgan research.

Fewer Australians – 59 per cent – still believe the worst is yet to come for the pandemic over the next month than did so a week earlier.

The figures come from a nation-wide web survey of 987 Australians aged over 18 conducted last weekend.

The number of Australians who are afraid they or someone they know will catch the virus has fallen slightly to 73 per cent.

Four out of five Australians were willing to sacrifice some of their human rights if it helped prevent the spread of the disease.

‘We had another 10-day window to actually respond and stop it getting that way,’ he said.

‘We worked hard to stop it getting that way but we also were lucky being down the bottom of the world we had a little bit more time to respond.’

Asian neighbours which acted quickly against coronavirus including Taiwan (379 cases, five deaths) and Singapore (1,623 and six) have fared even better.

‘You could also argue that our geographic proximity to Asia and seeing how Singapore, South Korea – China to some extent – really did respond very well and perhaps emulating them a little bit more than some of the western countries might be a small reason,’ Professor Blakely said.

‘But I think mainly that we had a little bit more time to respond.’

The first case of COVID-19 infection in Australia – a Chinese citizen who had arrived from Guangzhou on January 19 – was reported in Melbourne on January 25.

Six days later Australia banned the entry of foreign nationals from China and ordered citizens returning from that country to self-isolate for 14 days.

On February 3 World Health Organization boss Tedros Adhanom Ghebreyesus was still saying there was no need for measures that ‘unnecessarily interfere with international travel and trade.’

Australia’s self-isolation restrictions were extended to those returning from Iran on February 29, South Korea on March 5 and Italy on March 11.

That rule was further extended to anyone entering the country on March 15 and the nation’s borders were closed to all but citizens and residents from March 20. 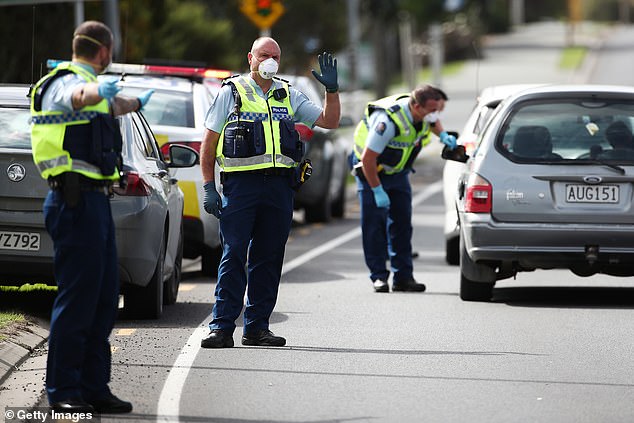 With New Zealand in lockdown due to COVID-19, police (pictured on Thursday in Warkworth) are setting up checkpoints to ensure people on the roads are travelling for essential purposes

Despite New Zealand and Australia’s success, epidemiologists who specialise in disease outbreaks have warned that drastic decisions to shut down a country do not necessarily eliminate infections and could merely delay a spike in cases.

Experts agree that lockdowns do ‘flatten the curve’ in the short-term but some say that when lifted, a spike in cases will inevitably occur.

UK Government advisers warned of a second COVID-19 wave in the autumn, upon the lifting of ‘very stringent behavioural and social interventions’.

The SAGE group did not explain what the measures were or if the UK had adopted them – but it is thought they include locking down entire regions, like China.

Top scientists say the killer coronavirus could spread after a lockdown by infecting patients who had no idea they were harbouring the killer illness.

Cases could snowball within days, with the SARS-CoV-2 virus known to be at least twice as contagious as flu and one patient spreading it to around three others. 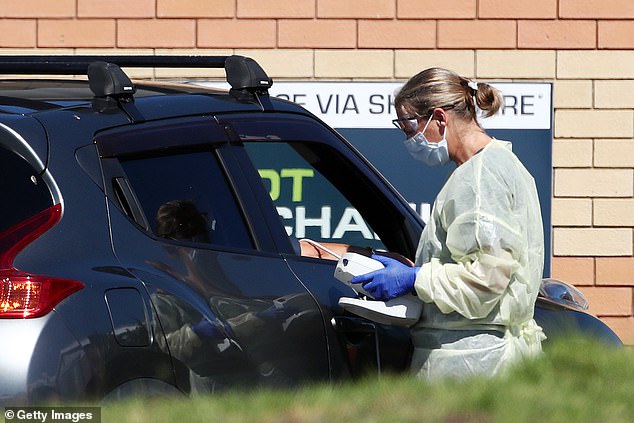 COVID-19 patients can be asymptomatic for days, meaning they unknowingly pass it on to others around them in the community.

Experts also warn easing lockdowns and allowing international travellers to enter again could lead to a spike in imported cases.

As of Friday, every new arrival will be required to quarantine for a fortnight – similar to a measure in Australia.

The government will also turn to tracking applications to assist with contact tracing, a model which has won praise in South Korea and Singapore.

There will also be roadblocks around New Zealand to stop Kiwis travelling to their beach houses or to visit family over Easter.