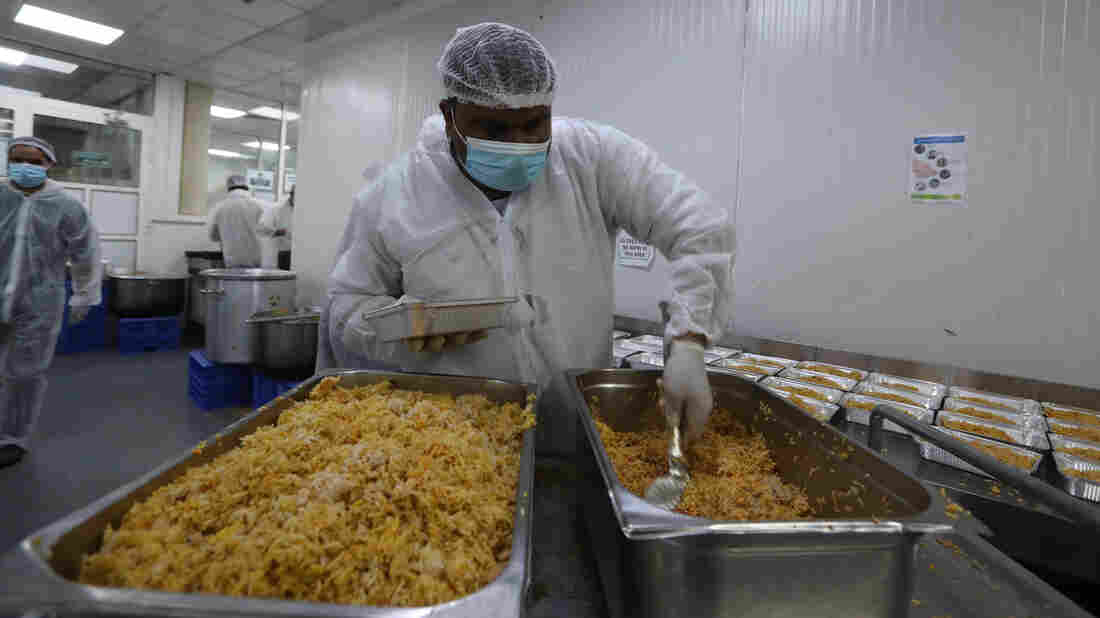 Qatar charity workers prepare food parcels for migrant laborers living under quarantine on April 16 amid the coronavirus pandemic in Doha. A restaurant better known for fine dining has lent its facilities to Qatar Charity to feed migrant workers, of whom tens of thousands are strictly confined to an area of Doha’s southern industrial area. Karim Jaafar/AFP via Getty Images hide caption

The Gulf countries and Saudi Arabia are struggling to contain the COVID-19 outbreak among migrant worker populations on whose labor the countries rely.

Even amid stringent lockdowns, the disease has continued to spread through migrant communities, with many workers living in cramped labor camps, where they share bunk beds in tightly packed rooms.

In Saudi Arabia, non-Saudi residents have comprised close to 80% of the more than 3,000 new confirmed coronavirus cases this week, according to the country’s Health Ministry.

Official figures in Gulf countries, where more than half of the population are foreigners, also suggest the disease is spreading fastest through migrant communities.

“This is not surprising,” said Ryszard Cholewinski, a senior migration specialist with the International Labor Organization. “You’ve got the perfect storm, where migrants live and work in conditions that are more conducive to the spread of COVID-19.”

These oil-rich countries have long attracted migrants from Southeast Asia and Africa who help in sectors including construction and energy. Some 35 million foreign migrants live in the countries in the Gulf Cooperation Council, as well as in Jordan and Lebanon, according to the United Nations labor agency.

Qatar is relying on migrant labor to help construct a gleaming stadium and other facilities for the 2022 World Cup. Rights groups say the workers’ living area compound in Doha has poor toilet facilities, little access to running water and cramped dormitories.

Amid the coronavirus pandemic, the Qatari government locked down parts of the compound, announced it would provide better sanitization and limit the number of people sleeping together to four per room.

Bahrain is reportedly using schools as extra housing to separate workers. Charities in the United Arab Emirates say they are seeking out empty buildings where migrants can isolate. Kuwait’s government granted amnesty and resettlement funds for undocumented immigrants in the country.

Gulf governments and Saudi Arabia have also said they are providing free COVID-19 testing and treatment for foreign workers.

But Cholewinski said some migrant workers, especially those whose residency papers may have expired, may not be using this service because “they fear arrest and deportation, even if the stated objective is not to do that.”