Queensland could move to reopen its border with NSW far sooner than expected as the chief health officer considers slashing the target coronavirus limit in half.

Dr Jeannette Young is considering a rule change that will require NSW to go just 14 days, rather than the current 28 days, without community transmission of COVID-19 before Queensland reopens the border.

She will reportedly mull the change after lobbying from Queensland Tourism Industry Council chief executive Daniel Gschwind, according to Nine News.

Dr Young says she won’t rush ‘a critical decision’ when the border restrictions are reviewed at the end of the month. 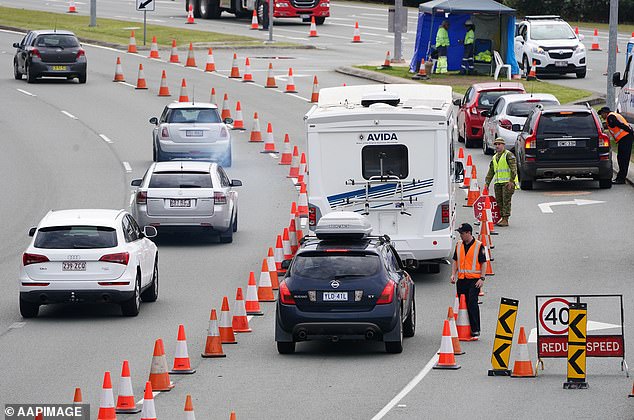 Queensland could move to reopen its border with NSW far sooner than expected. Pictured: Motorists are stopped at a checkpoint at Coolangatta on the Queensland-New South Wales border on August 7

‘We’re still concerned that in the past four weeks there have been 14 cases in NSW of which the cause of transmission is unknown,’ she told AAP in a statement on Wednesday.

‘For a lot of people at home, it might seem like the pandemic is almost over but in reality, Monday was a record day worldwide for COVID-19 cases.

‘We’ve all done so well to protect Queensland and we can’t let our hard work and sacrifices go to waste by rushing a critical decision.’

The state’s Labor government has been under sustained pressure from federal, interstate and local political rivals to ease border restrictions since the pandemic began.

A relaxation of the criteria could allow Queensland to reopen to NSW and the ACT much quicker than previously thought, and potentially in time for Christmas.

It could also make it easier for the federal government to get its proposed national hotspot system up and running. 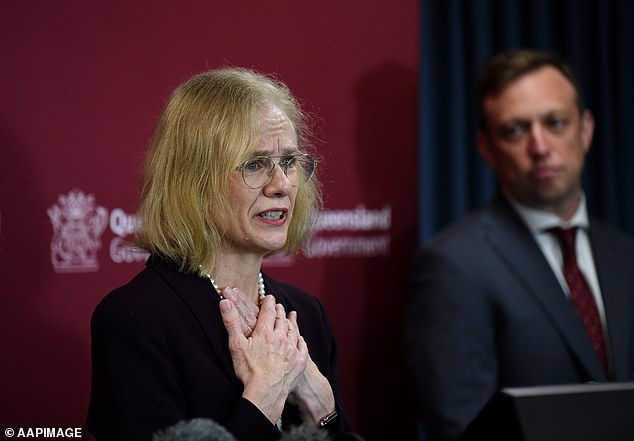 Dr Jeannette Young is reportedly considering a rule change that will require NSW to go just 14 days, rather than the current 28 days, without community transmission of COVID-19 before Queensland reopens the border

‘The guideline that’s been set by the Queensland government in relation to when they reopen their border is a pretty tall order,’ she said.

‘I don’t know anywhere on the planet where a society could function productively during a pandemic and get an assurance you’re going to (get) zero cases of community transmission.

‘If you have confidence in your health system, confidence contact tracing is something you can do within your state, there shouldn’t be a reason for you to keep your border closed given the low rates of community transmission currently in NSW.’

Under the current rules Queensland’s border is closed to visitors from NSW unless they live in a border region or have an exemption on economic or compassionate grounds.

All visitors from NSW, the ACT and Victoria have to go into mandatory 14-day quarantine upon arrival in Queensland.

The state has no restrictions on visitors from South Australia, Western Australia, Tasmania or the Northern Territory