All bright for some! Crowds head for the coast as the South basks in 77F sunshine – but it’s a washout for the North with torrential showers and thunderstorms

By Bhvishya Patel For Mailonline

The UK is set for a north-south divide today as torrential showers make their way across northern parts of country and southern England continues to bask in sunshine and highs of 77F before welcoming an ‘African heat flare’.

As a mix of sunny spells and scattered showers move across the nation, northern regions will be met with a cooler start to the week, with temperatures in Yorkshire and central Scotland dropping to 66F.

Meanwhile sweltering Britons who flocked to the country’s beauty spots in Brighton and Cornwall will soon enjoy rising mercury levels as an ‘African heat flare’ brings with it ‘very hot conditions’ in southeastern areas and a ten-day heatwave from Thursday until mid-August.

The 700 mile-wide plume of heat, which will rise up from the South, will see temperatures soar to a scorching 95F, with forecasters predicting ‘drier, brighter and very warm’ weather towards the end of the week.

Today hundreds of sun-seekers rushed to Bournemouth beach to enjoy the warm weather while others poured onto Barry Island beach in Wales to bask in the sun.

The scenes come just a day after Cornwall was branded the ‘Benidorm on steroids’ after floods of visitors left residents too scared to leave their homes and go food shopping yesterday.

Locals blasted the hordes of sun-seekers pouring onto the coastal area and flouting social distancing guidelines, with one terrified woman saying she had banned her children from the main street and harbour.

The chaos came just days after Matt Hancock warned a second wave was ‘starting to roll across Europe’ towards Britain and declared there was a ‘real danger’ of the UK being struck by a spike in cases. 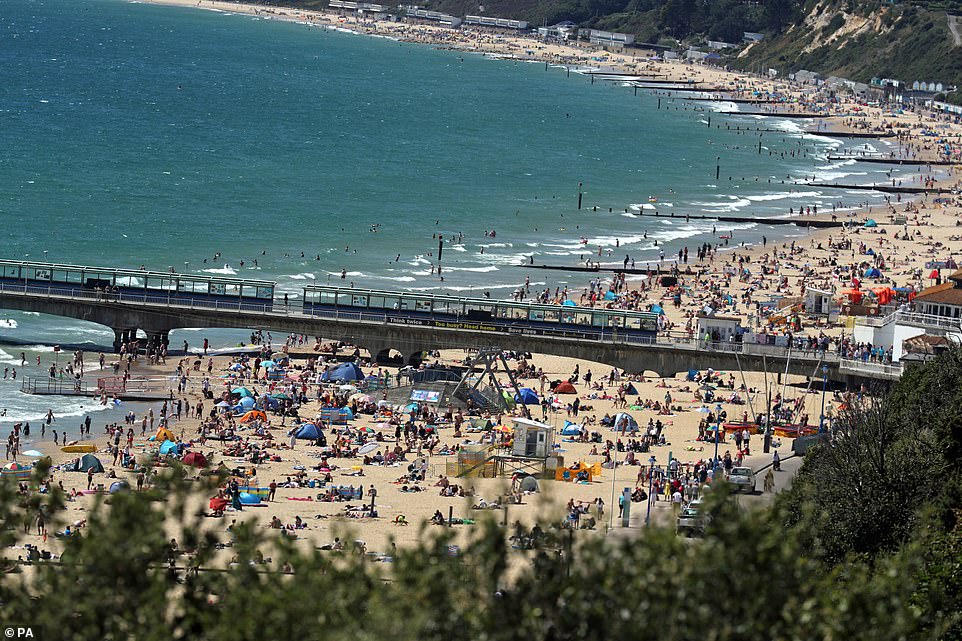 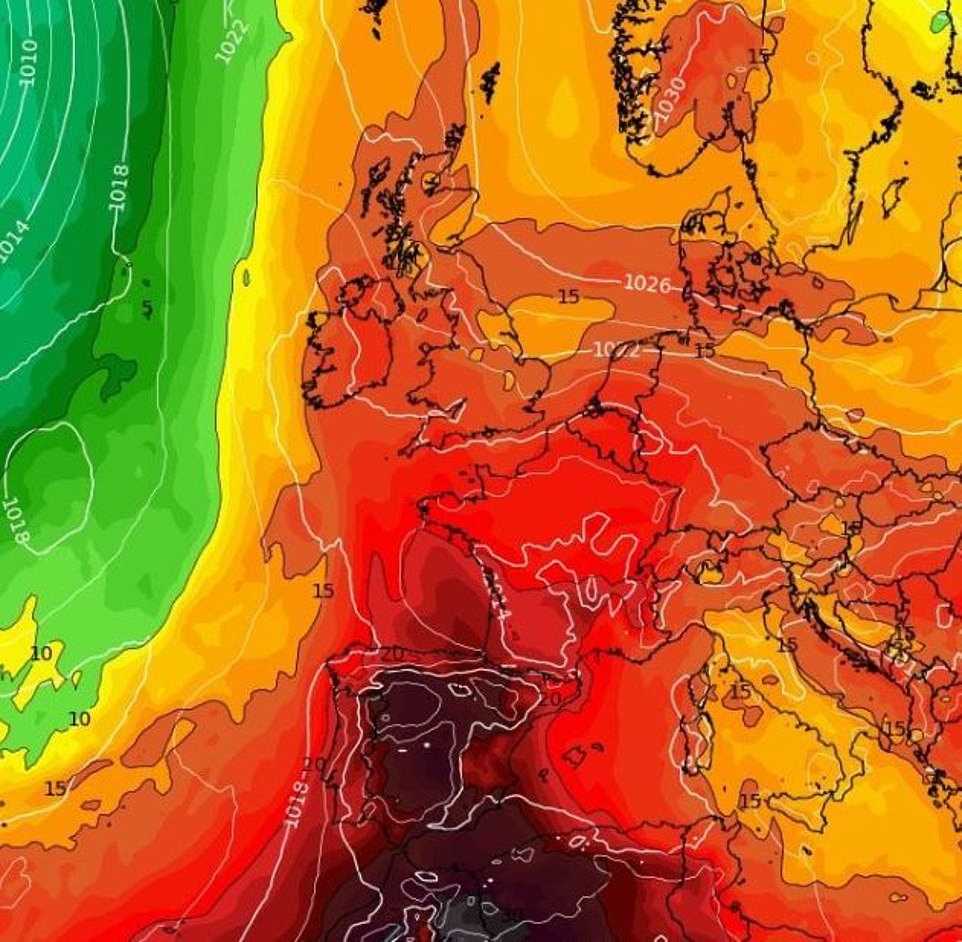 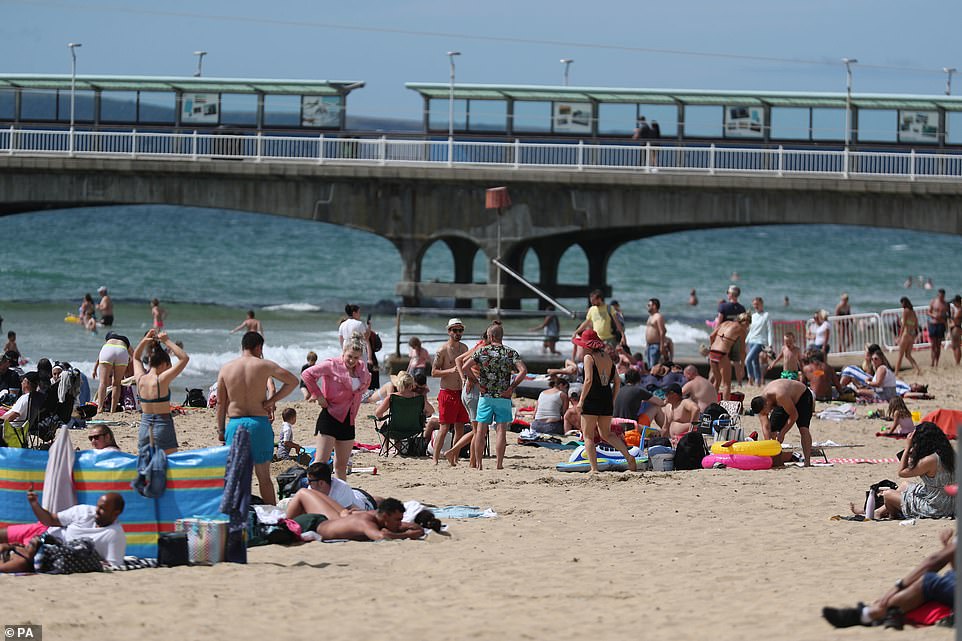 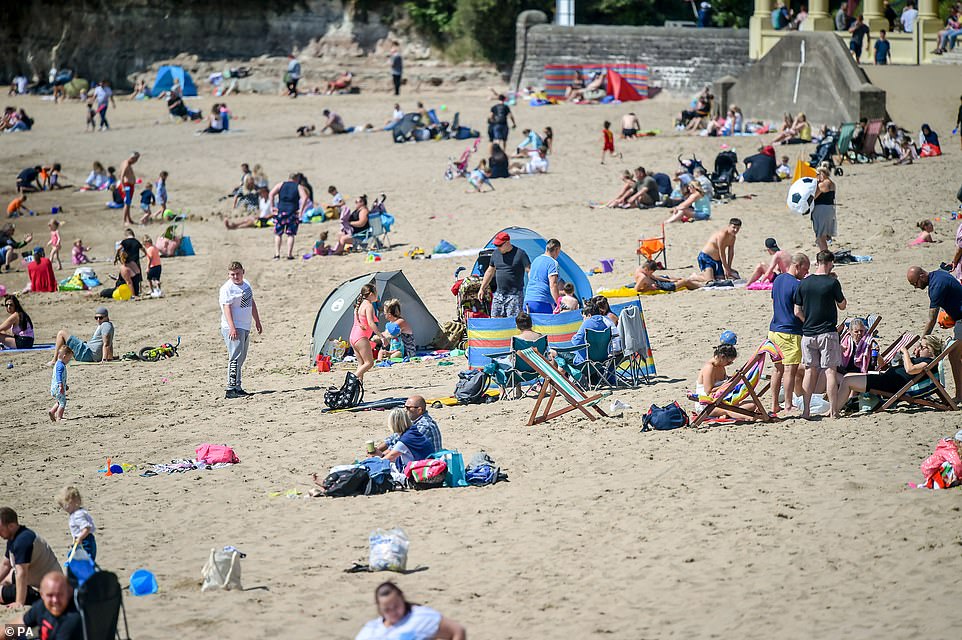 Meanwhile others gather on a sunny Barry Island beach in Wales, as the temperatures continued to rise across the southern regions 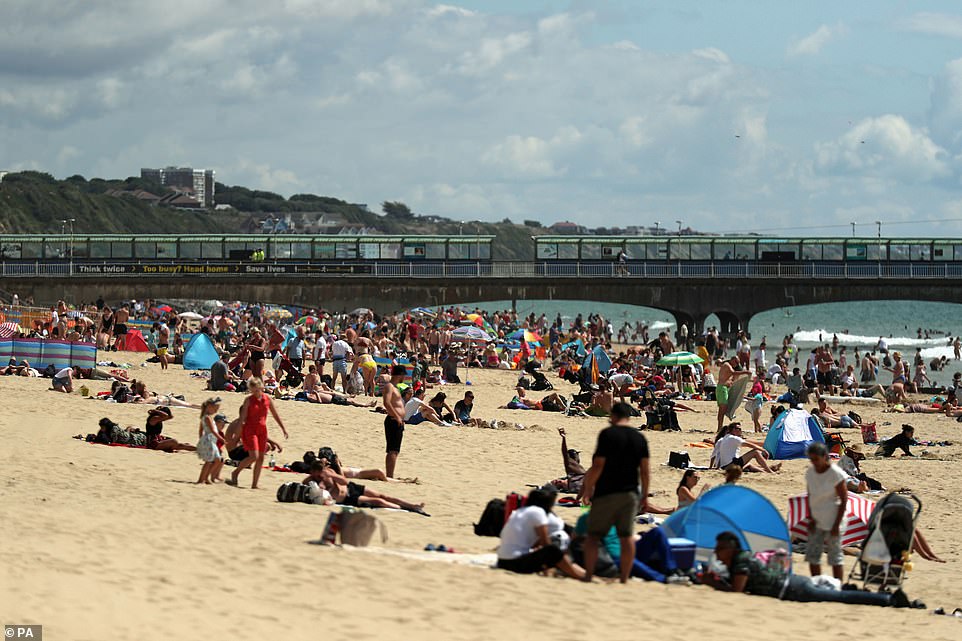 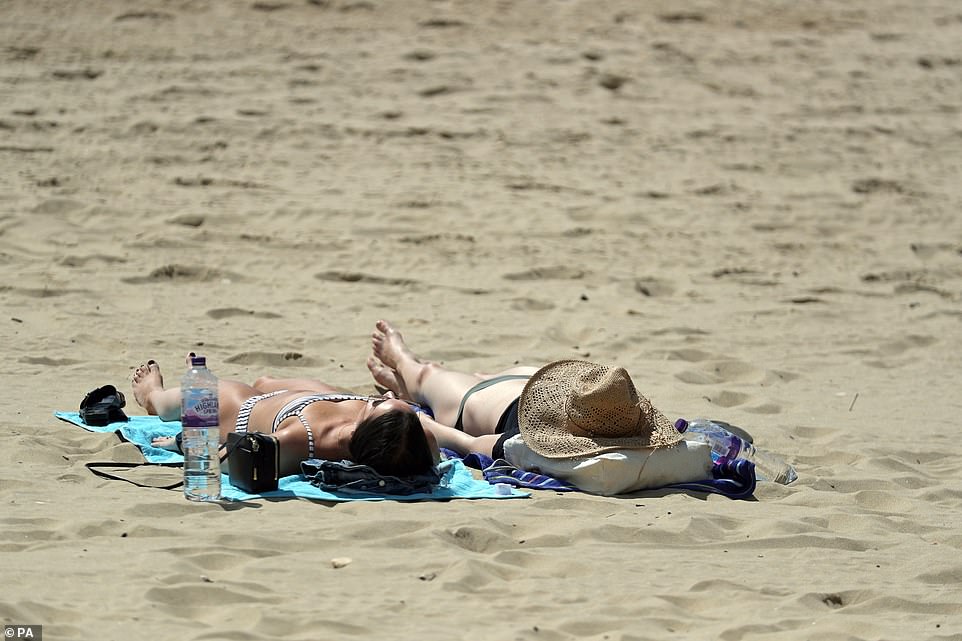 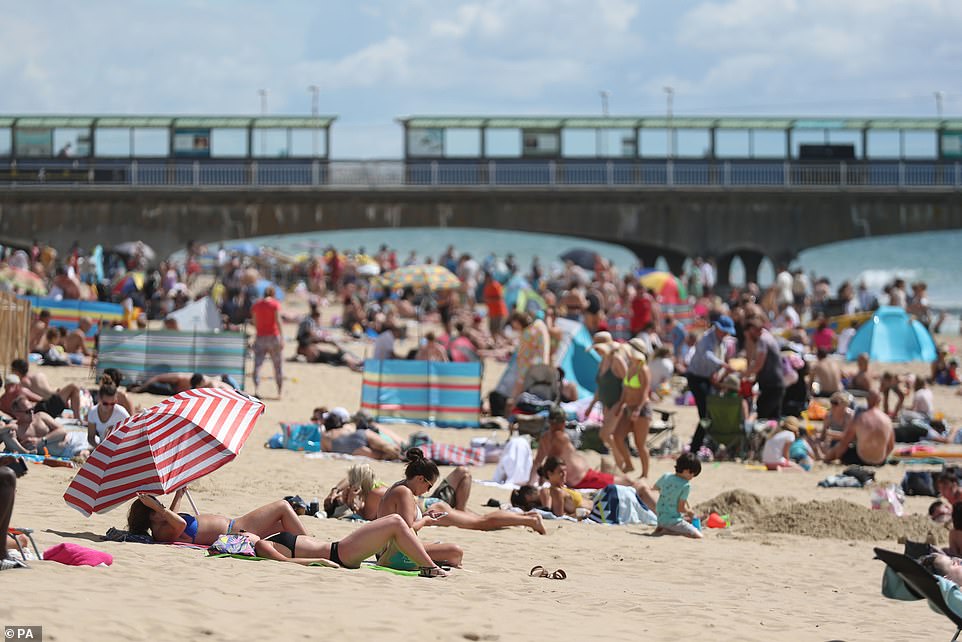 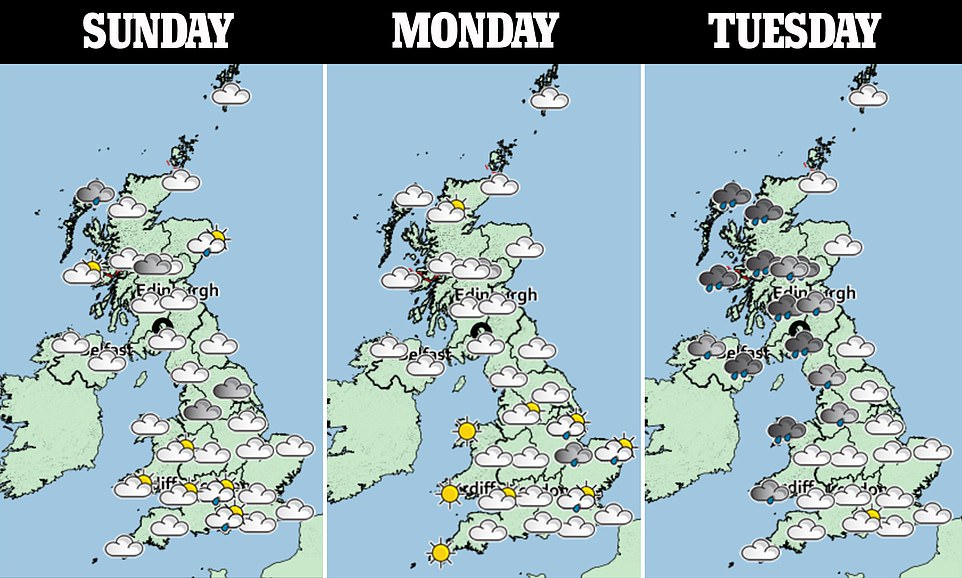 This week ministers confirmed people who now test positive for coronavirus or have symptoms similar to those presented by Covid-19 would be told to stay at home for ten days— up from the current seven-day self-isolation period because ‘evidence has strengthened’.

It came hours after it emerged that Boris Johnson — who fears a second wave could strike Britain within a fortnight — told his SAGE advisers and cabinet ministers that he ‘needs to act fast’ and is expected to ramp up quarantine measures at home and abroad within days.

Following the chaos this weekend it was revealed that there were no free spaces for campers or campervans at any of the top 20 sites in Cornwall – or the top 15 in Dorset.

Today, regions in the far north of Scotland are expected to remain cloudy today with the threat of rain, while warm sunny spells are expected to continue in the south of England with the chance of a few showers in south-west England during the night.

Sarah Kent, Met Office meteorologist said: ‘Today is a little cooler than yesterday for most with a mix of sunny spells and scattered showers.

‘There will be heavy showers for north east England this afternoon but no weather warnings have been put out. Temperatures will range from 25C in the south east to around 19C in the central belt of Scotland. 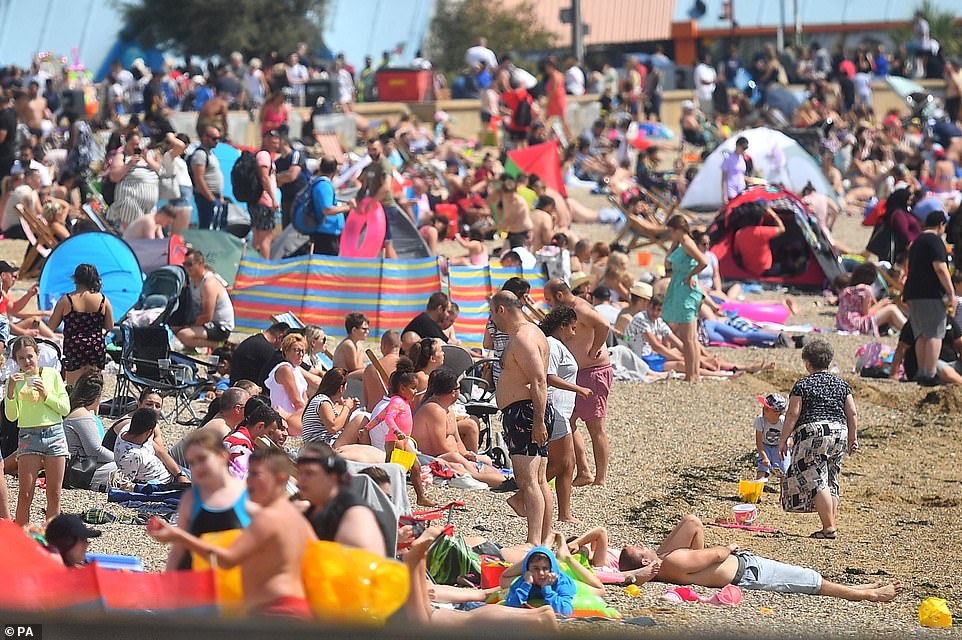 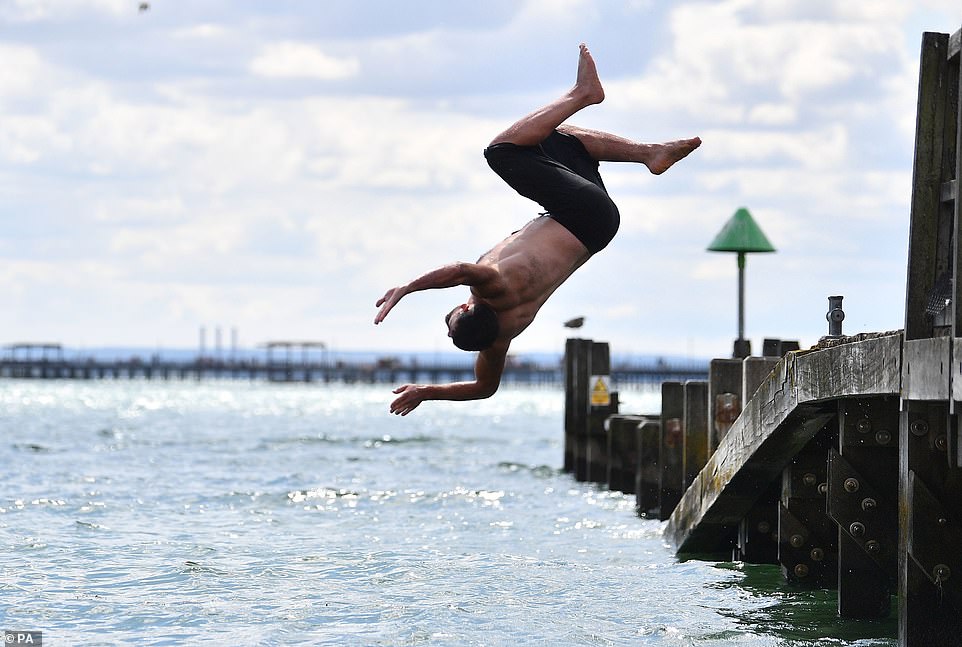 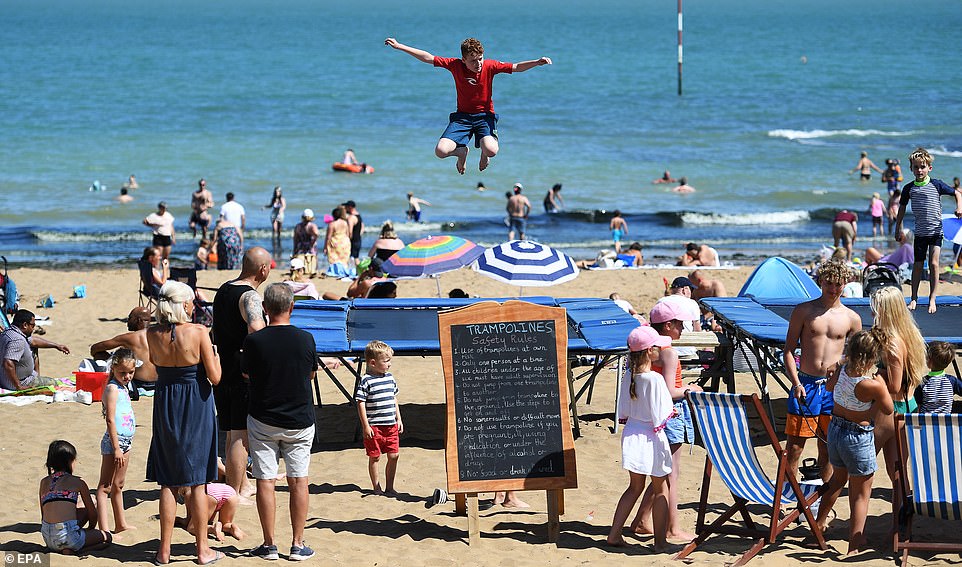 At Broadstairs in Kent, hordes of people flooded onto the beach to take in the sea air and enjoy the sunny weather 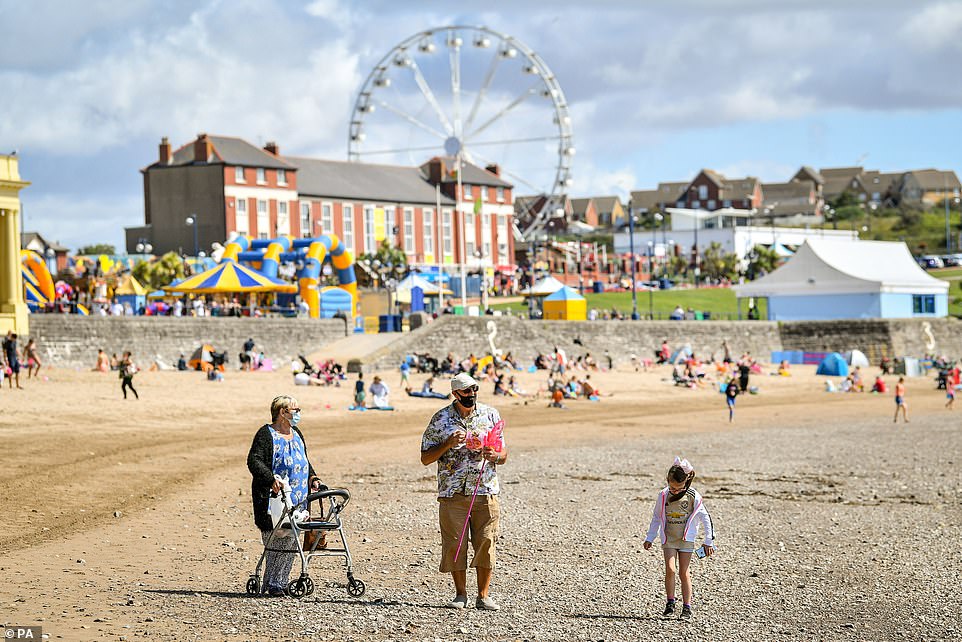 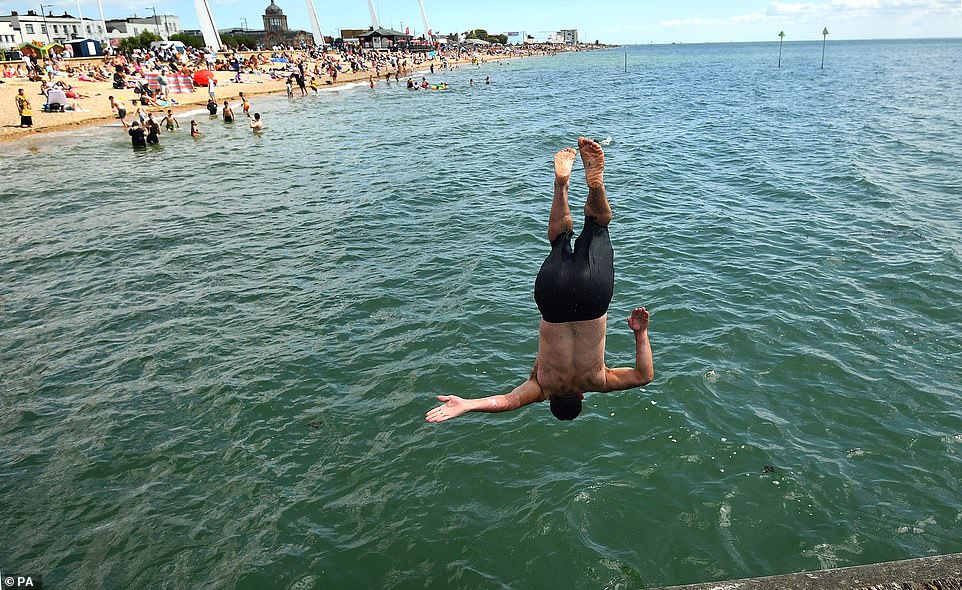 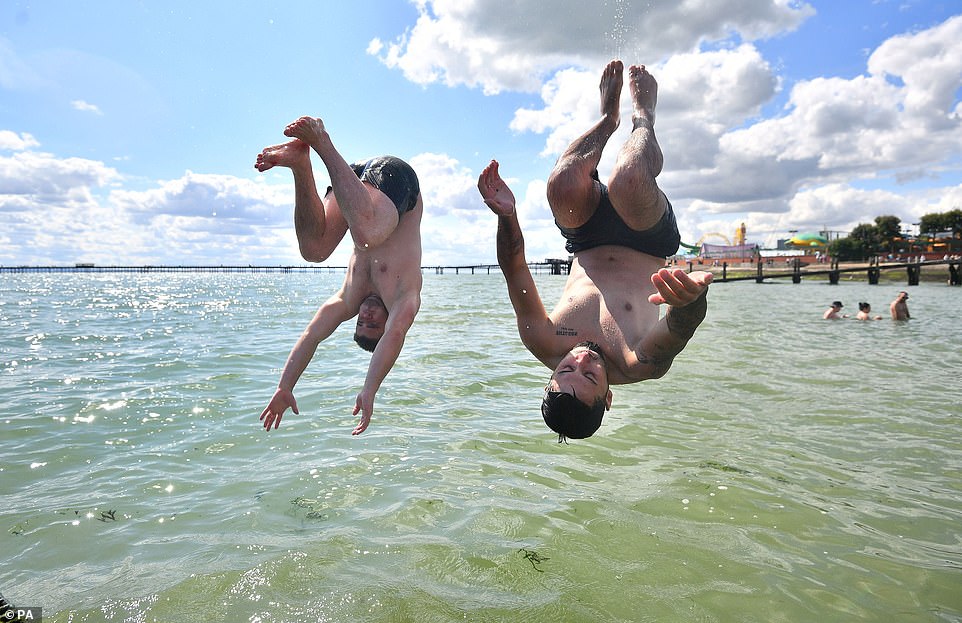 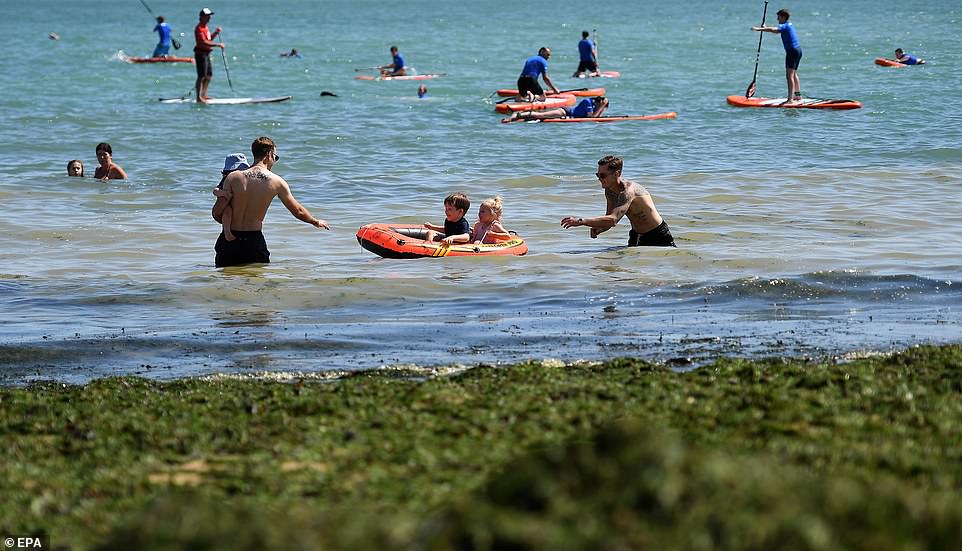 People take a dip in the sea and soak up the sun at the beach in Broadstairs, Kent, today as southern parts of the country enjoy the sunshine 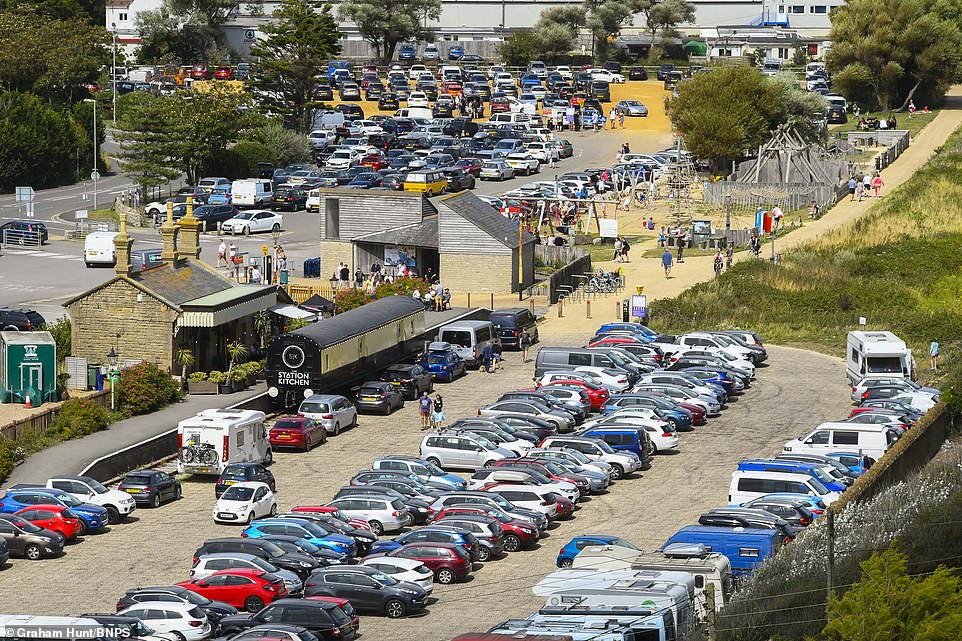 Car parks are packed in West Bay, Dorset, as holidaymakers and sunbathers flock to the beach at the seaside resort to enjoy the sunny weather 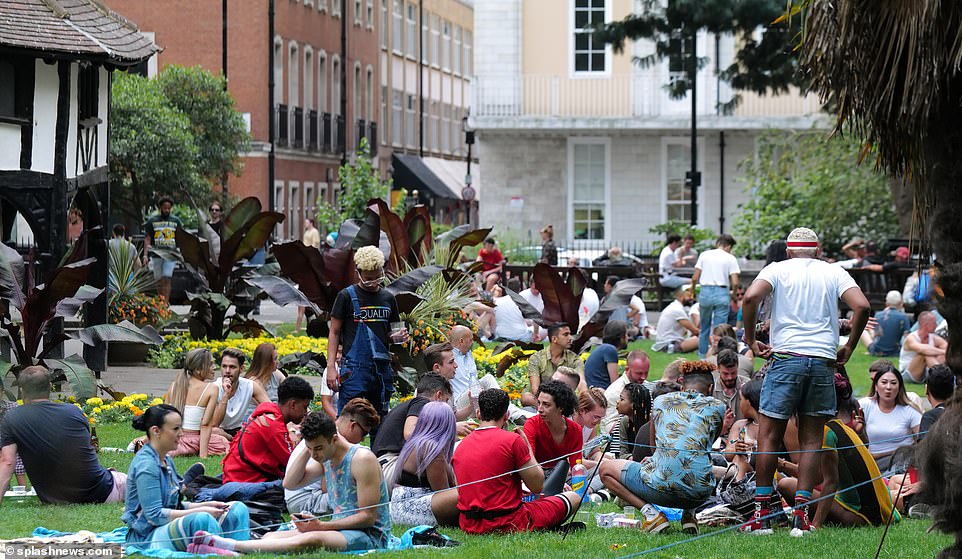 People flout social distancing guidelines in Soho Square, London, as they sit down to enjoy the sunny weather sweeping across the country 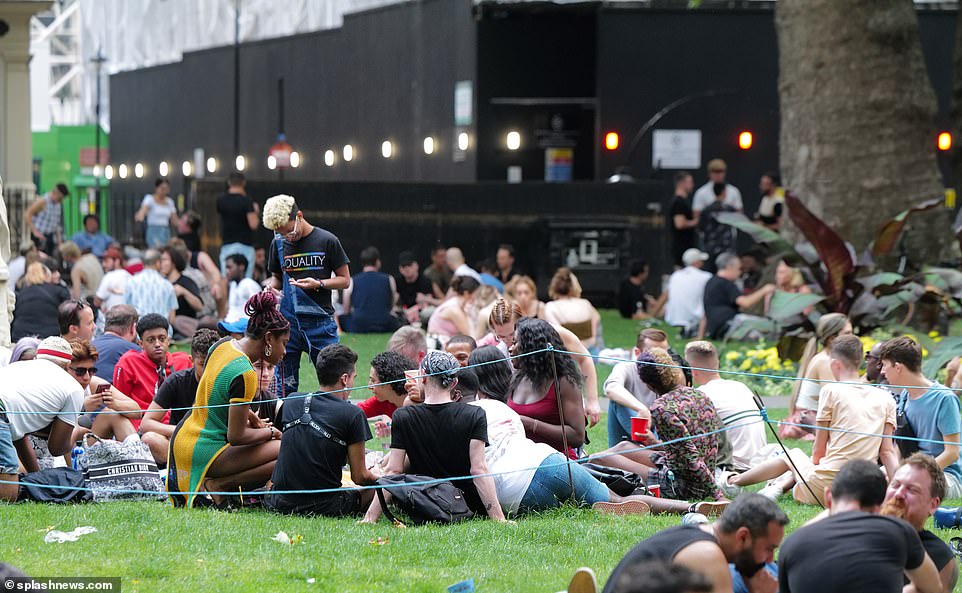 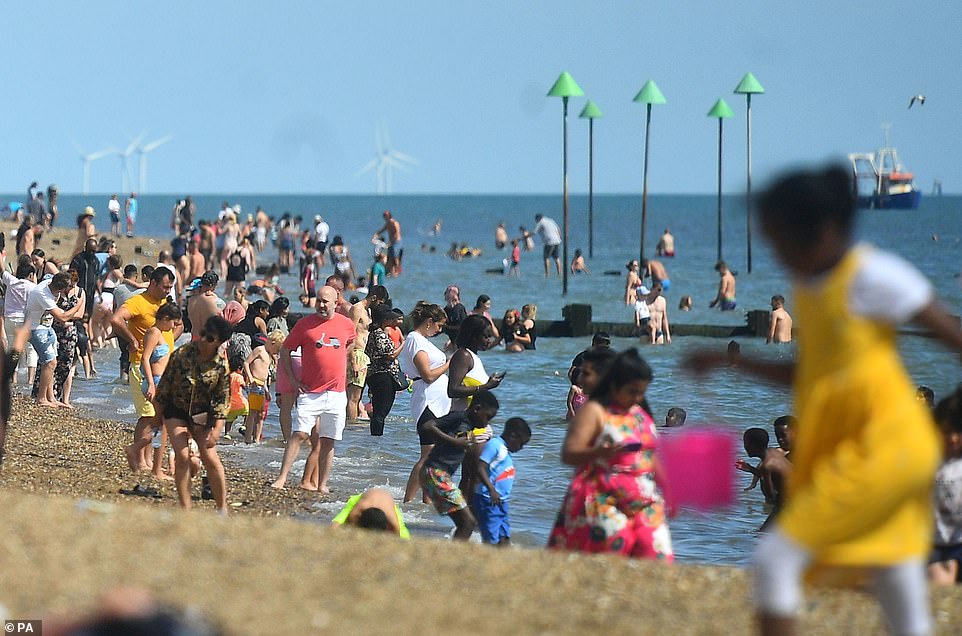 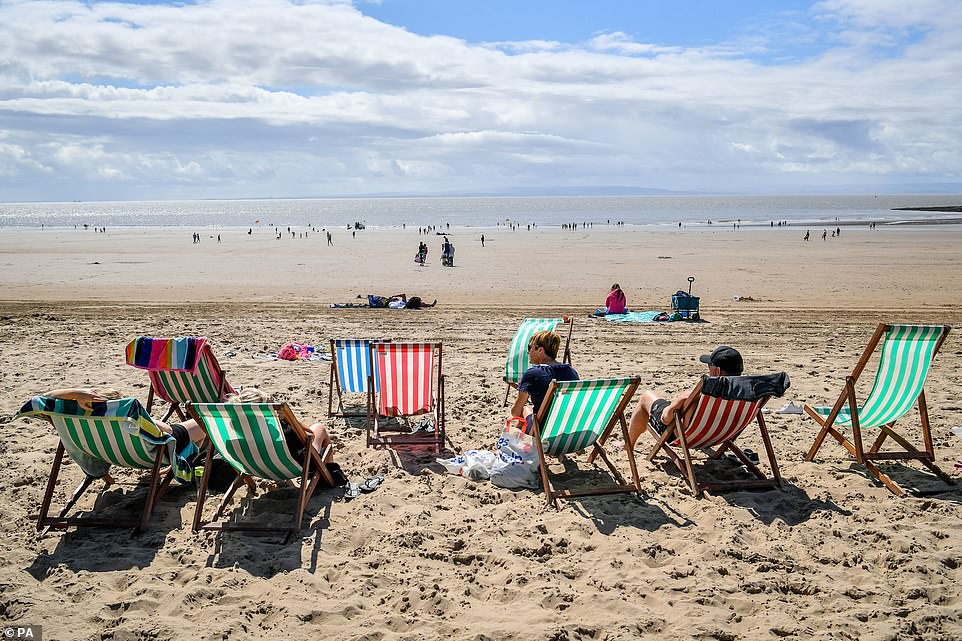 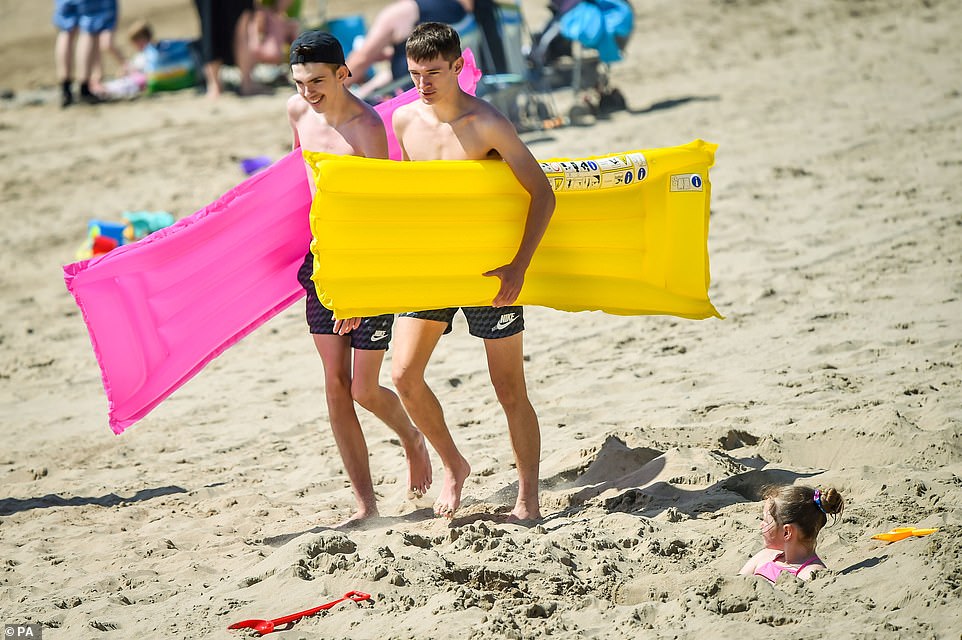 On Barry Island beach in Wales, two people walk across the sand with lilos as the county continues to bask in the sunshine 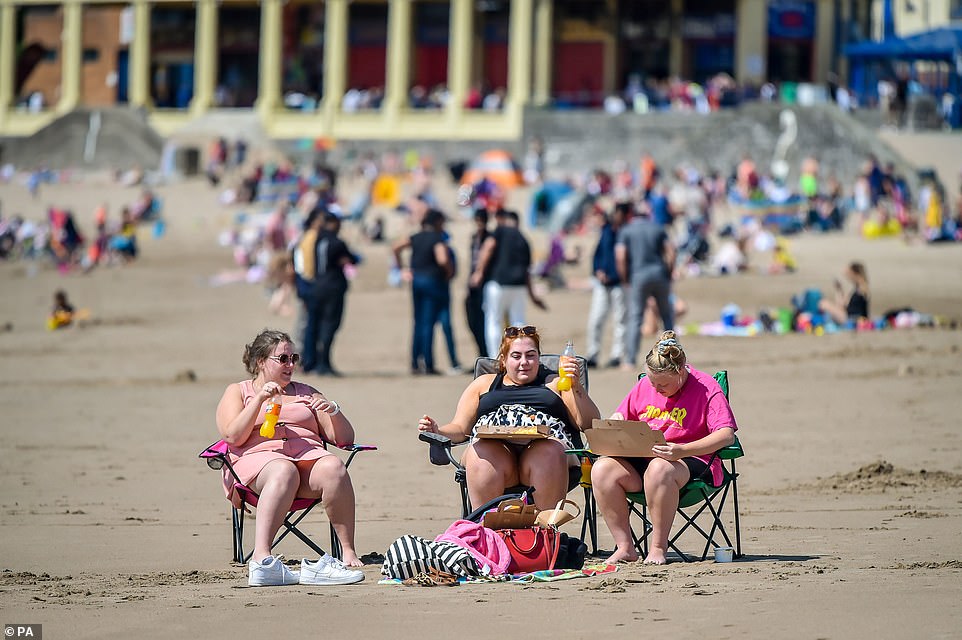 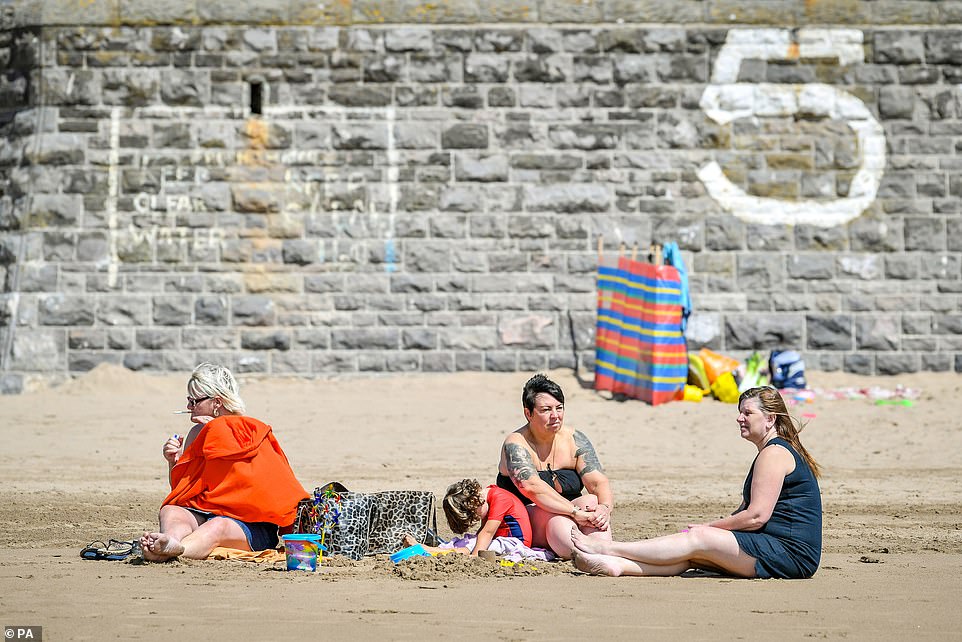 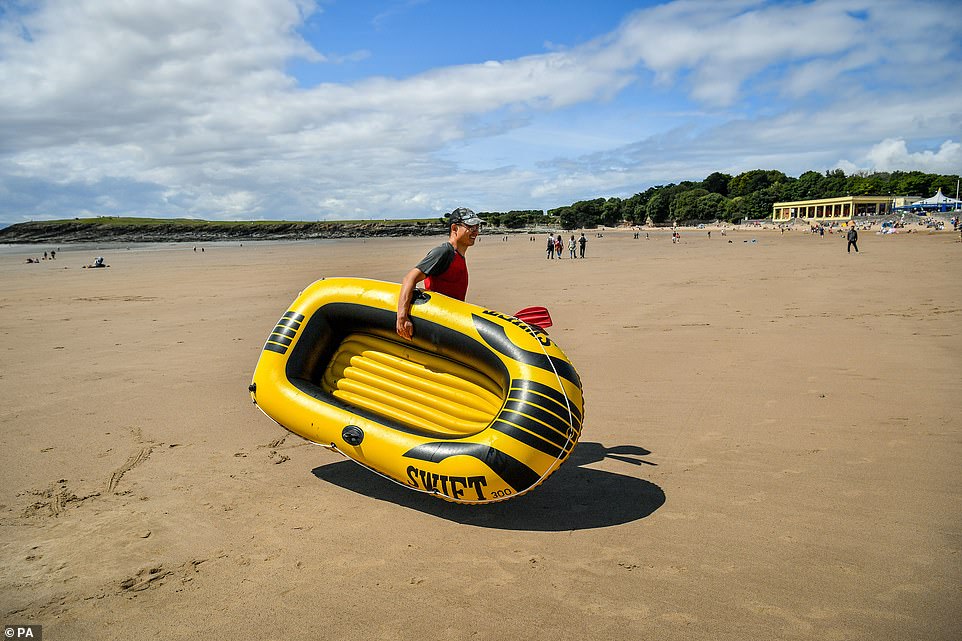 A man carries out an inflatable dinghy onto Barry Island beach, Wales, as the hot weather continues in the country 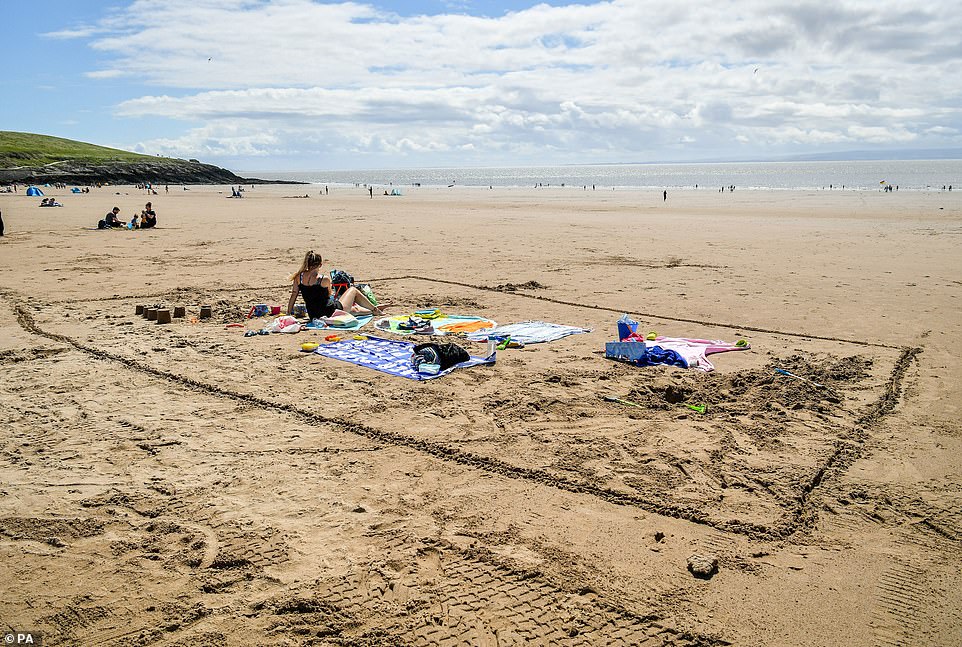 ‘Monday will see top temperatures of around 23C in London but around 18 in Glasgow, in that central belt.

‘There will be a bit of a change in the weather on Tuesday and Wednesday. We will see a frontal system starts edging in. It will be bringing rain to northern Ireland, Scotland, North West England on Tuesday afternoon.

‘Thursday will be dry for most, increasingly warm and sunny in the South. That’s the same for Friday. Friday will possibly be in the low 30s in the south.’