By Natalia Penza and Ryan Fahey For Mailonline

Cumulative cases, which also include results from antibody tests on people who may have recovered increased to 288,522 from 285,430, the ministry said.

The ministry added that 1,525 of the infections had been confirmed within the past 24 hours – the highest daily increase since the end of April.

But the government’s most senior coronavirus expert, Fernando Simon, denied Spain was in the grip of a second wave of infections.

‘A second wave would be when we have uncontrolled, widespread community transmission,’ he told a news conference. 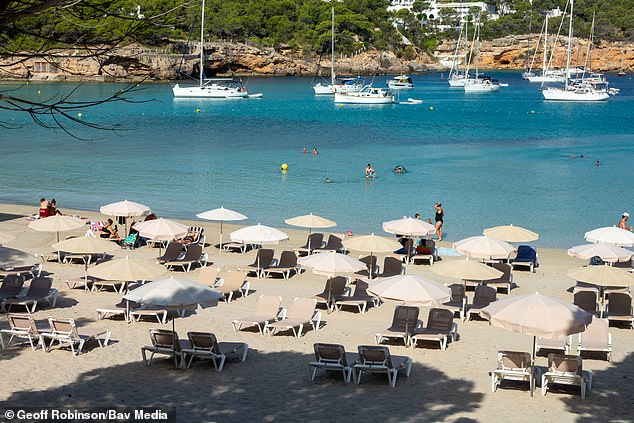 Picture dated 28 July shows the quiet beach in the resort of Portinatx in Ibiza.

While acknowledging the virus was spreading freely within some communities in the northeastern regions of Catalonia and Aragon, Simon said most of Spain had the outbreak under control.

He also stressed Spain’s epidemic had become far less deadly than during its early April peak, when the daily death toll approached 1,000.

Just 10 people died in the past seven days, partly as the virus is spreading more among young people, who are less vulnerable to the respiratory condition.

The health ministry is monitoring 483 active clusters of the virus, defined as three or more linked cases spread across different households.

Around three quarters of the clusters include less than 10 people, Simon said, though a few contain more than 100 infections.

The rising rates of virus transmission has left travellers to the popular holiday destination stranded, after many left straight after Spanish lockdown was relaxed, only to find themselves in a country that was witnessing a resurgence in cases.

Today, it was reported that ten tourists have been quarantined in a Majorcan hotel set aside for coronavirus patients who do not require hospital treatment. 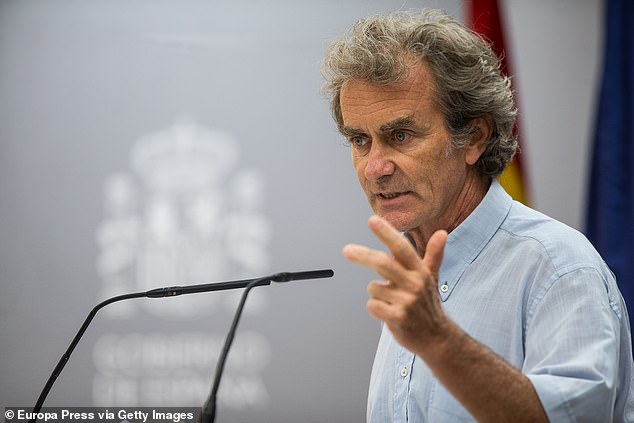 The director of the Coordination Centre for Health Alerts and Emergencies (CCAES), Fernando Simon, during a press conference to inform about the evolution of the COVID-19, in the Ministry of Health yesterday in Madrid, Spain

The holidaymakers will be made to self-isolate for 14 days after one tested positive for Covid-19.

The hotel has been identified locally as the three-star Morlans Gardens in Peguera, a small beach resort a ten minute drive from Magaluf in the south-west of the island.

The nationalities of the tourists have not yet been made public although they are thought to have flown to Majorca from abroad.

President of the Palmanova-Magaluf Hotel Association, Mauricio Carballeda, told local media today that under a third of Magaluf or Palmanova hotels plan to open in August.

Mr Carballeda said: ‘Of the 88 hotels in Palmanova and Magaluf, only 33 are open or were going to open.

‘Now, after the UK announced its quarantine for returning British tourists, two of those hotels will close and three have said they won’t open.

‘That leaves 28 hotels out of 88. The recent measures announced by the British government have made what was already a complicated and difficult year worse.’

He added: ‘We hope the UK changes its mind as a matter of urgency and reconsiders what they have done.’