The US already had 6.4million coronavirius cases in APRIL: Study claims there were nine times more cases than reported by the CDC six months ago and today’s true total is still unknown

By Natalie Rahhal Us Health Editor

New research suggests that the US already had 6.4 million cases of coronavirus by mid-April – more than were officially reported as of Thursday.

Researchers at the University of California, Berkeley, calculated that the real number of infections by April 18 was nine-times higher than the 712,000 reported by the CDC, which they believe was a massive undercount due to insufficient or inaccurate testing.

According to Johns Hopkins University’s tally, 6.39 million US cases were confirmed by September 10.  The current death tolls stands at more than 191,000.

Testing in the US has ramped up considerably – but if as many people might have had coronavirus by spring as are confirmed now, the real case number remains a mystery, and is likely much higher.

It is a grim perspective on the early spread of coronavirus –  but the upside is that if cases were as high as the Berkeley team estimates by April, and as few as 20 percent of the population needs antibodies to reach herd immunity, the US may be closer than previously thought. 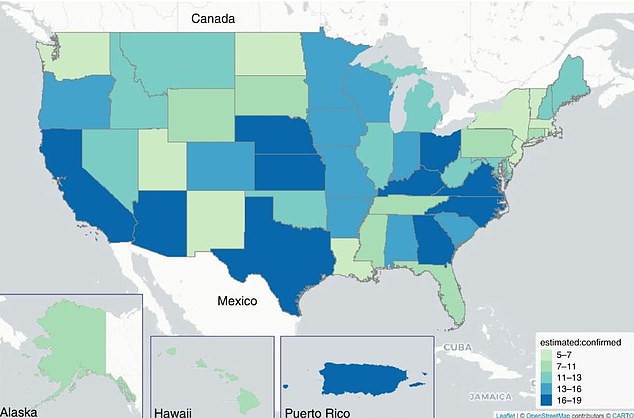 The numbers of estimated versus confirmed coronavirus cases were closest, as of April, in states like New York and Washington (green) that were hit hard early on, while the disparity was greater in places like California and Texas (dark blue), where infections spiked later

UC Berkeley scientists calculated that the real number of US coronavirus infections in the US was anywhere between three- and 20-times higher than the Centers for Disease Control and Prevention’s (CDC) tally of confirmed cases as of April 18.

The disparity ranged broadly from state-to-state and, as a consequence, so did their mathematical model’s estimate of the real national case number.

On April 18, the US ran a total of 146,156 coronavirus tests, according to data from the COVID Tracking Project.

Today, 614,042 tests were performed in the US – four times more than were being  done in April.

President Donald Trump boasted on April 27 that the US had tested ‘more than every country combined,’ for coronavirus.

But the new study blames ‘incomplete’ testing for 86 percent of the undercount of coronavirus tests up until April 18.

Granted, a portion of that inadequate testing took place in the earlier months of  the pandemic’s grip on the US, when the CDC had sent out faulty tests, private sector kits were just beginning to trickle onto the market, and fury over lacking testing in the US abounded.

The UC Berkeley authors attributed the remaining 14 percent of disparity between their April case estimate and the CDC’s to inaccurate tests. 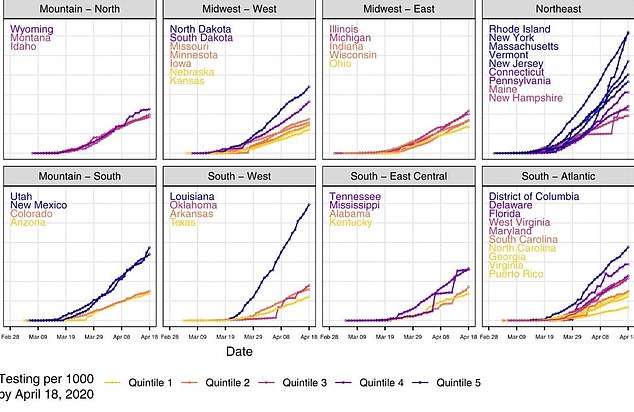 Most states were not testing nearly enough people to get an accurate estimate of coronavirus cases in the spring, according to UC Berkeley scientists who suggest infections were nine-times higher than the official count as  of April 18 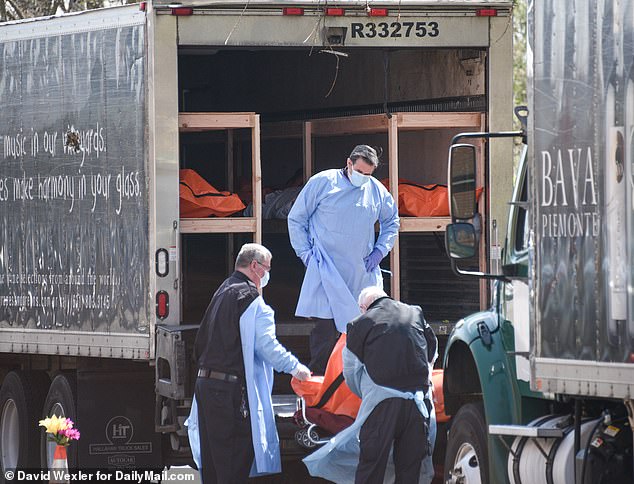 Hospital Workers at Good Samaritan Hospital, in West Islip, New York, remove a body from a refrigerated truck, used as a mobile morgue In April when the epicenter of the outbreak was in New York

Inaccurate tests aside, the during those first few months of the pandemic, the CDC recommended that coronavirus testing only people with symptoms.

At the time, the only relevant symptoms were considered to be fever, persistent cough and shortness of breath.

The majority of states complied with that recommendation, which was made largely to conserve the tests, which were still in short supply, and in part to limit further exposures from going to testing sites.

But now, research suggests that anywhere from 30 to 70 percent of people with COVID-19 have no symptoms or only develop mild ones.

Plus, with better understanding of the wide-ranging effects of COVID-19, the list of symptoms associated with the infection has expanded to include many that were previously dismissed, including nausea, vomiting, headache and loss of taste and  smell.

‘Thus, a substantial number of mild or asymptomatic infections in the US may be undetected,’ the UC Berkeley study authors  wrote. 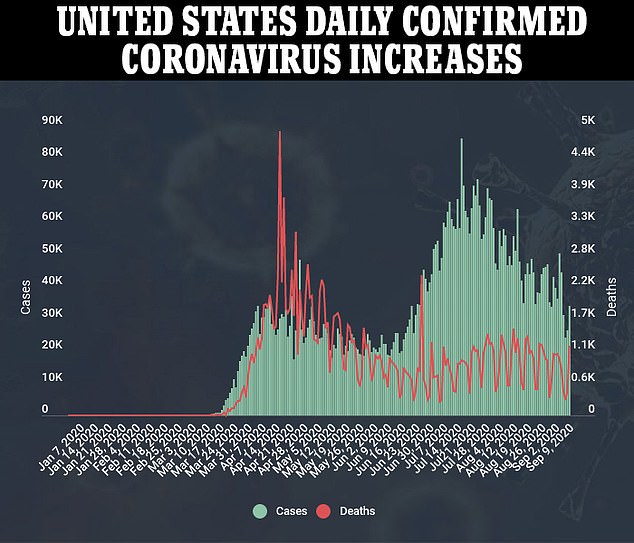 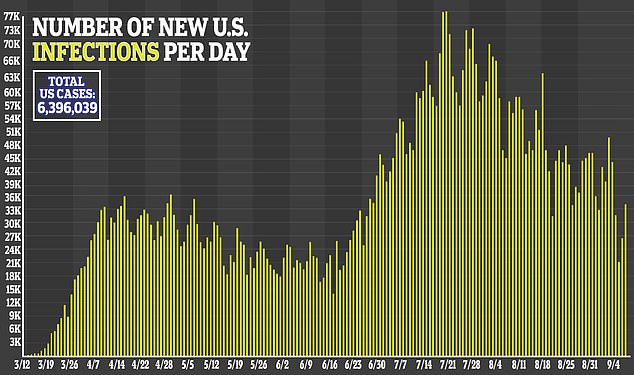 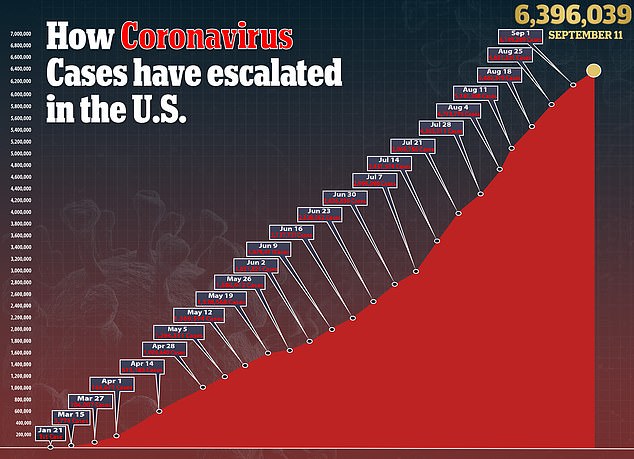 It wasn’t just the CDC discouraging American from taking mild symptoms seriously as signs of COVID-19; President Trump himself dismissed the disease as ‘like the flu.’

Interviews with Bob Woodward show that even Trump knew better. The President told Woodward he knew that coronavirus was deadlier than the flu back in February – but didn’t want to cause ‘panic’ by speaking to the true seriousness of the  pandemic.

Some states, such as New York, now encourage anyone who wants one to get a coronavirus test. The CDC says that ‘not everyone needs to be tested,’ and advises testing for people who have symptoms, have been in contact with someone with COVID-19 or who has been instructed to get screened by their health care provider or local health department.

Even with the massive increase in testing, a recent Rockefeller Foundation and Duke University report suggested that the US needs to be doing nearly 200 million tests a month. About 20 million are being run a month now.

The UC Berkeley authors could not be reached for comment, or an up-to-date estimate of how many people have COVID-19.

But even if no infection had been missed since the April 18 end of their study period, if their estimate of US cases for that date is correct, their model would suggest that more than 12 million Americans have had COVID-19. 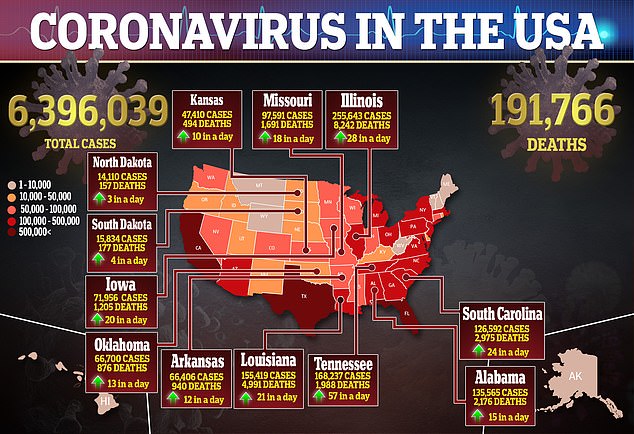